This is the latest entry in my series of campaigns centered around one multiplayer faction.

This one is based on the Undead faction, and is designed to gradually introduce all undead units. It allows the Ancient Lich and Death Knight upgrades, and features fights against all 7 factions.

This one was tough, since unlock some of the other factions I've made campaigns for, there are tons of high-quality undead campaigns like Descent into Darkness and Secrets of the Ancients.

So I didn't try to compete with those campaigns by adding a lot of unusual objectives or items, etc. Instead, this campaign has two unusual features:
-All dialogue is taken from Shakespeare. Occasionally names were changed, or perhaps one word, but otherwise all text is from Shakespeare.
-The first scenario has an Amulet of Possession that allows a ghost to possess another unit. This is to allow the player to, for instance, capture an Elvish Shaman and level it up with the other units. It's optional, for players who want more variety than the standard undead faction. 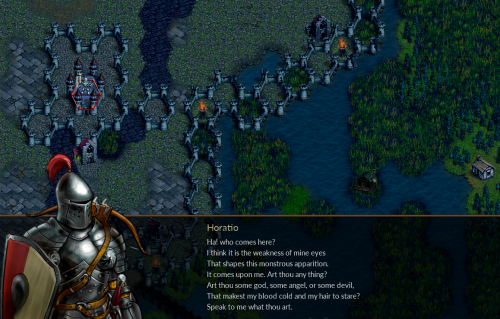 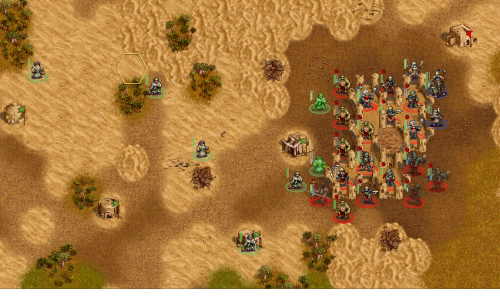 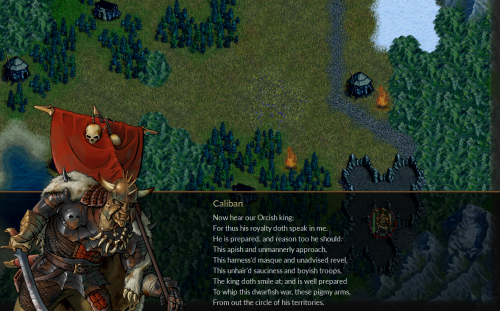 This is a beta version. Please let me know if you find any bugs.

Also, please let me know if you find it boring in terms of objective or feel like more text could be added. I considered having levels where:
-Instead of killing the leaders you just have to kill a 'quota' of enemies
-You have to recruit and keep 5 skeletons alive during a scenario
-Reaching a signpost instead of defeating an enemy.

However, when I was testing I had fun with just 'defeat the boss' objectives, so I didn't add the special ones. Let me know if you'd prefer them in!
Last edited by MathBrush on January 12th, 2022, 5:43 am, edited 1 time in total.
Drake Campaign: A Fiery Birth | Knalgan Alliance Campaign: Drunkards, Dwarves, and Doubloons | Dunefolk Campaign: Asheviere's Shadow | Northeners Campaign: Goblin's Glory | Undead Campaign: Shakespeare's Ghost
Top

Creator of "War of Legends" and "Hero of Irdya: Book I."
Creator of the Isle of Mists survival scenario.
Maintainer of Forward They Cried
User:Knyghtmare-:-Friend me on Facebook-:-Follow me on Twitter
Top

Replays Part 2 (since i dont have 6+ attachment privileges)

Remarks:
1. Fast campaign (can be done in under 2 hours)
2. Undead faction with a Spectre as leader. Cool.
3. No objective variety at all.
4. Dialogue felt a bit confusing most of the time. So, felt lost. Really lost.
5. Seeing Dunefolk with European names was weird.
4. Has some maps which make undead having a menacing advantage (vs Knalgans and vs Northerners).
6. Final scenario was okay. Could have been better.
7. Second vsLoyalists was not necessary.
8. Overall score: 4.5/10
9. perhaps vary experience_modifier= in the campaign to allow players to get a decent number of veteran units.

Commentary:
Congrats on getting the 5th of the seven done. I guess you're left with Loyalists and Rebels.
Creator of "War of Legends" and "Hero of Irdya: Book I."
Creator of the Isle of Mists survival scenario.
Maintainer of Forward They Cried
User:Knyghtmare-:-Friend me on Facebook-:-Follow me on Twitter
Top

Thanks for the feedback! I'll check out the replays later.

I agree with a lot of your thoughts. For me, this was my least successful campaign. I didn't know if changes (like switching up objectives) would improve it, so I think I'll try that out. I might incorporate 'normal text' story segments to make the story make more sense, but maybe not; the whole idea overall is pretty flawed. Thanks for trying it out!
Drake Campaign: A Fiery Birth | Knalgan Alliance Campaign: Drunkards, Dwarves, and Doubloons | Dunefolk Campaign: Asheviere's Shadow | Northeners Campaign: Goblin's Glory | Undead Campaign: Shakespeare's Ghost
Top

Inspired by Knyghtmare's playthroughs and comments, I've made an update to 2.0 with the following changes:

Scenario 2-Changed to survival objective, with more gold given to enemy (and opportunity for more experience).
Scenario 3-Additional objective: keep at least 5 skeletons alive by the end of the scenario. More gold added to balance shorter previous scenario.
Scenario 4-Enemies buffed significantly. Additional objective added: defeat 12 units. Players can opt out 'early' after defeating 12 units, or continue playing to gain more experience.
Scenario 5-Alternate objective added: reach sign post behind drakes. Drakes get more gold.
Scenario 6-Beams of light added around cave. Cave split in 2, and monsters added to second cave. Additional objective: defeat monster leader for 100 XP, designed to help players get Ancient Lich (or get a different Tier 3 of interest)
Scenario 7-Several 'civilian' goblin villages set up around the map, each with its own goblin patrol. The player loses if more than 3 civilians die. Turn limit extended due to extra difficulty.
Scenario 8-Tunnels added between each enemy base, allowing much faster killing of leaders but also allowing enemy to gang up on you all at once if handled poorly.

Once one more person plays through (I did another playthrough to check it all works), I'll up it to 1.0. Thanks!
Drake Campaign: A Fiery Birth | Knalgan Alliance Campaign: Drunkards, Dwarves, and Doubloons | Dunefolk Campaign: Asheviere's Shadow | Northeners Campaign: Goblin's Glory | Undead Campaign: Shakespeare's Ghost
Top

Atreides
Posts: 494
Joined: March 30th, 2019, 10:38 pm
Location: On the 2nd story of the centre village of Merwuerdigliebe turning the lights on and off
Contact:
Contact Atreides
Website

Hi, I just started this and played scen 1. I liked it. On easy it was actually easy which is a big plus for me. I guess I'll upgrade and play on since scen 1 wasn't altered. Heh.
--
Lonely Era Merry Christmas Campaign Red MP Maps Everfell Age of Trials
“Some people scorn a cat and think it not an essential; but the Clemens tribe are not of these.” ― Mark Twain
Top
Post Reply
6 posts • Page 1 of 1