Drunkards, Dwarves and Doubloons (formerly Knalgans of Steel) now on 1.16

Drunkards, Dwarves and Doubloons (formerly Knalgans of Steel) now on 1.16

Edit: This campaign was formerly known as Knalgans of Steel, and had a lot of silly political commentary. That's been removed in favor of a heist story. The scenarios are the same.

From the creator of A Fiery Birth:

Florel is a human outlaw imprisoned for sticking it to the man. Karmoc is a dwarf trying to evade taxes.

And together they're going to pull off the biggest heist in Wesnoth history!

Fight goblins and elves, orcs and mermaids, royal armies and the mysterious Dunefolk in this origin story of the Knalgan faction!

Play with all the Knalgan units in a single campaign over 10 scenarios, culminating in an epic 4 on 1 fight. 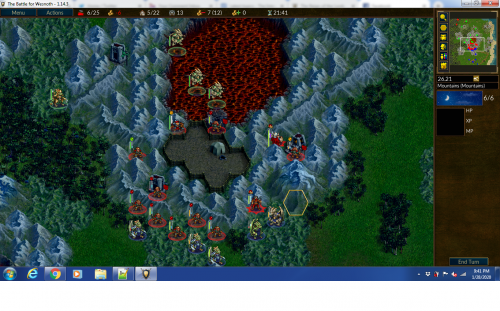 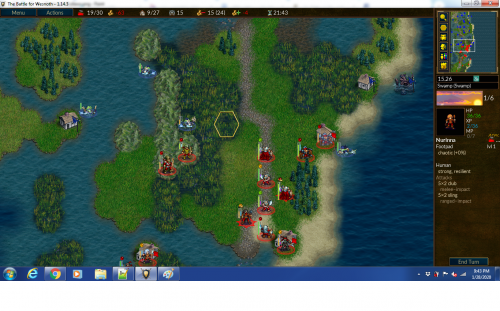 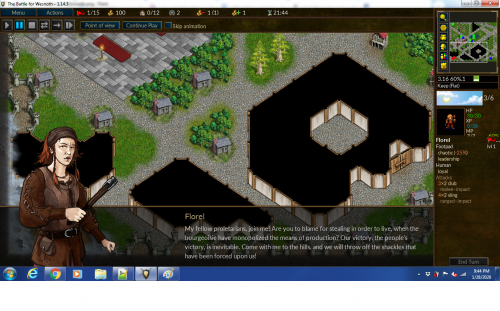 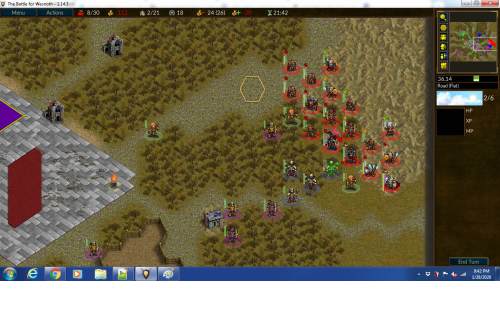 Hey,
Just started the campaign and thought I would post some early thoughts. I'm playing on Normal and Wesnoth 1.14.8

S3: Crossroads
Spoiler:
The two heroes just met and have a tentative alliance but both can recruit/recall the other's units. I think that story-wise (at least at this point in time) each hero should have their own recruit/recall lists
Objective states 80% carryover but only 40% is carried over
S4: Cousins
Dialogue
Konry: every few days months --> is it days or months?

Thanks! I’ve made your suggested changes, but I’ll wait to push them onto the server until you finish the campaign in case you find more.

No problem, it's probably a Wesnoth thing i just don't think I ever noticed before

S7:
Possible bug; the victory objective states
Spoiler:
Make it to the bank vault
however victory is achieved if all enemy leaders are defeated
Also, the carryover gold thing is the same

EDIT 3:
Not sure if this is a campaign bug or a Wesnoth bug, but you can't see your statistics from Scenario 2: The Taxman

-Also, I'm not sure if it was mentioned and I just missed it, but why/when did they start calling themselves "Knalgans"? I know that's what the campaign is meant to be about, but I don't remember there being an explicit bit of dialogue where it was decided.
-Karmoc: for over --> forever
-I feel like the "discovery" of the gold mine was a little cringe-y/forced. Could there not be another cutscene/epilogue? Or could a "scout" be returning with news of a new mine? Or some other plot device?
-Suggestion: adding in a bonus dialogue/action if we manage to keep Konry alive?
-Could there be a line in the objectives stating that this is the last scenario? I know its kinda obvious (no turn limit, plot, lots of enemies, etc) but its always nice to see it stated somewhere

EDIT 4:
Overall, good campaign.
-Was well balanced for Normal, maybe slightly easier than expecting for an intermediate campaign (not that I'm complaining)
Spoiler:
Except for that surprise in the drake scenario

-Lack of healers could be annoying for others, but I think that the abundance of villages in each map makes up for it (and it makes sense story wise)
-I feel like the story/plot towards the end could be more fleshed out. In terms of how they got their name, why their base was there, etc...)
-The final scenario is good gameplay wise, but story-wise I feel like it doesn't make sense for all the enemies to be on the same alliance (i.e. they can't attack each other). This should probably be explained in the dialogue somewhere
Spoiler:
e.g. dwarves and elves agree to split the loot, hire the Dunefolk as mercenaries, orcs decide to join them to enact revenge/uphold honour or whatever
Top

I've uploaded Version 1.1 with changes as suggested by WackoJacko:
Thanks, WackoJacko!

Konry is loyal but has no loyal sign (1.14 add on server, the latest version)
Top

Konry can't die...he just gets knocked out. It's rough having an ulfserker hero, since they die so easily. I haven't coded in any special ending if he never dies, and he's supposed to be reviving every scenario. Did he not show up in your final battle?
Drake Campaign: A Fiery Birth | Knalgan Alliance Campaign: Drunkards, Dwarves, and Doubloons | Dunefolk Campaign: Asheviere's Shadow | Northeners Campaign: Goblin's Glory | Undead Campaign: Shakespeare's Ghost | Rebels Campaign: Santa Must Die
Top

Well, he "got knocked out" in the last battle so I couldn't see this reviving in action.
Top

Hey, MathBrush. I gave this a go, purely I think because of the title! A heist is a interesting idea, and it plays fine. I was doing it on 1.16 on hard and it took me about 3 tries to succeed at each scenario, which feels about right. Punishing, but just about doable. The only bug I noticed was on the cousin map - there was a lua error to do with a Dark Sorcerer (I think it's simply a typo). That's as far as I've got so far.
My current projects:
MP pirate campaign: The Altaz Mariners
RPG sequel: Return to Trent
MP stealth campaign: Den of Thieves
Top

MathBrush wrote: ↑June 28th, 2021, 4:02 pm This campaign has been renamed Drunkards, Dwarves and Doubloons, with revamped dialog and a few fixes to various recall problems. It is uploaded to 1.16.

Oh no, the Oxford-comma-loving pedant in me is sad...

Just updated this to fix the LUA error, thanks! I haven't checked this thread for a while.

As for the Oxford comma, would changing the printed name of the campaign create a new campaign on the MP server? Which piece of the code does the server recognize as the main identifier for the campaign?
Drake Campaign: A Fiery Birth | Knalgan Alliance Campaign: Drunkards, Dwarves, and Doubloons | Dunefolk Campaign: Asheviere's Shadow | Northeners Campaign: Goblin's Glory | Undead Campaign: Shakespeare's Ghost | Rebels Campaign: Santa Must Die
Top
Post Reply
15 posts • Page 1 of 1