This is the feedback forum-page for the War Plan Scarlet singleplayer (SP) campaign.

You have played the campaign and have any comments regarding it? Please post about it here.

The development has reached RC status so far. I finished a 7 scenarios.

I enjoyed this, but I received an error that crashed BfW (I'm using the 1.15.1 version) on my Mac running Catalina when I won the final scenario... See attached for the error message.

Course, I have not yet checked to see if other campaigns cause it to crash when won.
Top

I do not experience a crash ending the campaign War Plan Scarlet, neither by winning nor by loosing it.
Hopefully latest BfW version 1.15.2 isn't affected by this error on your Mac running Catalina.
Top

I have greatly enjoyed your campaign and I would like to give some feedback.
The only difficulty I played was Hard, and it was a bit challenging but i am sure there were some issues.
In the first scenario the naga leader didn't recruit any units and later in the game this error kept appearing. 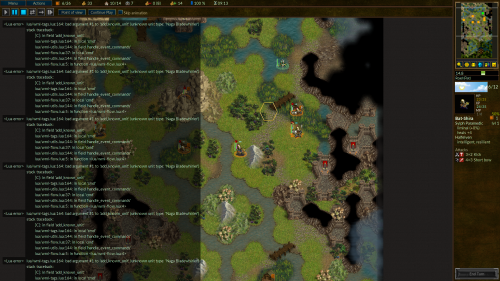 regardless of that, i found the campaign really appealing!
Keep up the good work!
A while ago...
Top

I just want to point this bug out. That's the campaign selection dialog. 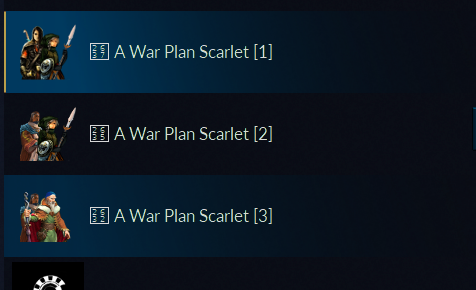 The missing symbol error has been fixed.
Top

Hm, which episodes are present on 1.16 server? Because I can only see the first part (Sand Storm).
Top

Quietly nice, but the half-elves faction should be improved in all ways (aren't you anglophone, aren't you?). Once this campaign is improved and finished, it could be added to the mainline, since no dunefolk are mainline in 2022.
Top

The faction really needs cleaning up, in terms of both spelling and some gameplay things:
1)While the fact that your recruit list changes depending on MC's gender is novel and all, the recruit list that female protagonist gets is way, way more limited in terms of where it can go. Male protagonist's forces can get some pretty notable advancements (ranged cavalry with marksman or defense only "mages"), in general there is a lot of variety, and they can all level to level 3 (Except Ensigns). Female protagonist's recruits are limited to 3 endpoints - flying Leadership user (the only one that can get to level 3 btw), a Sniper Scout that is pretty nasty (7x5 with marksman seems good for level 2), and a healer. Also level 1 Snipers have a fire-type attack that none of their advancements retain, which is kinda sad.

2)Speaking of Snipers, their Marksman weapon special just doesn't work. Unless it's supposed to be defense only, attacking a naga with it and seeing 40% hit rates is... suprising. EDIT: Sniper Scouts' Marksman also doesn't work.

3)Liminal units get nothing from Fearless trait - them getting it is literally "this unit has no 2nd trait". Why are they getting it? At least neutral units cannot get it, that would be silly. Also, are all half elven units supposed to have Intelligent as one of their traits?

5)Some units are just plain weird. Ensigns bear huge tower shields, and their description says it's supposed to help against attackers, yet their resistances are negative, and they have skirmisher for whatever reason. Shieldguards are shown carrying flails along with shields, yet their only weapon is a shield bash.
6)Why is the protagonist limited to level 2? Especially since they are otherwise identical to recruitable units that can get to level 3 (Marine Captain for male protagonist, which can advance to level 3 Marine Colonel, Maiden Captain for female protagonist which can advance to level 3 Maiden Colonel).

Also, I have asked the question before - how many parts are there supposed to be? The image from Konrad2 above shows that there are supposed to be three parts (presumably that was on 1.15 version?), yet I can only see one on 1.16.

Speaking of Maiden Cornet, its advancement, the Maiden Captain, has one less hit than the preceding level, so its damage is barely better despite having almost double the damage. (7x3 compared to 12x2). The same thing happens with Marine Cornet to Marine Captain advancement, and advancements for both genders of the protagonist.

Snipers have a ranged Fire attack that they lose no matter their advancement. Even Sniper Scout, the most direct advancement, doesn't have it. Snipers also run into RIPLIB on their melee attack (they have 4x4, Sniper Scouts have 3x3, Physicians have 12x2, and Maiden Captains have 12x2 Arcane).

Similarly to Confidantes, Bochers have an Arcane ranged attack that they lose no matter what. Of their four advancements, only one has a ranged attack (Paramedic), and its weaker (3x3 Impact vs original 3x4 Arcane). Also much like Confidantes, they have First Aid+2 that they don't retain unless they advance to Registrar.

While not RIPLIB related, I find it weird that Marines can advance to Paramedics, which is another level 1 unit. Shouldn't that advancement be to Field Medics instead (similar to how Snipers can advance to level 2 Doctors)?

Marines run into RIPLIB as all of their advancements lose ranged cold attack and FIrst Aid, and all but one lose melee cold attack (the one that doesn't loses every other attack they had).

Operatives run into RIPLIB as their advancement goes from frost melee, fire ranged to arcane melee, impact ranged. Their melee attack goes from 4x4 to 7x3.

Phoenices start with a 4x2 melee attack, but upon advancing it becomes a 8x2 ranged attack, and they get no replacement melee option at all.

EDIT2: Played the campaign on hard, with female protagonist.
Much of the plot and dialogue is taken from An Orcish Incursion. Now, AOI could be an inspiration for it, and it was much more difficult compared to it, but I have literally just played AOI, and the similarities are staggering. Hell, of the four guys that join you in the final mission, three have the same names as three of the rangers that joined you in the final mission of AOI. The hints you get are also largely the same, and they don't always work: Scenario 2's hint doesn't mention the main problem with Skirmishers, aka their skirmishing ability and is a copy of AOI's hint about Orcish Assassins (which is nowhere near as useful as 90% of rivers on the map are fords); Scenario 4 mentions how your units and nagas are both liminal, except nagas are neutral, where your units are either all liminal (female forces) or a mix of neutral and chaotic (male forces); Scenario 5 mentions that Mentor can recruit units on a keep, except he is an NPC leader, of course he can recruit on a keep; Scenario 6 is a direct copy of AOI's scenario 6 hint (undead are resistant to physical, use magic) that doesn't even matter because 99% of half elven units can do Arcane, Impact or Fire damage; Scenario 7 mentions using golems to pull a sneak attack (via golems having Nightstalk), except you have a grand total of one golem (the one you got in the second mission), unless you recruited them in the previous mission (where Mentor can do it) and recall them here... in which case you blew a ton of money on recalling level 0s since golems can't level.

There are also some problems in dialogue. Why use generic units as "advisors" when you have a perfectly servicable loyal unit that joins from the start (Hulda)? Why does Attache say in the final scenario that he had just caught up to you if he literally rejoined in the second scenario?

The unit variety as female protagonist is... staggering. You have captains that deal arcane damage and can get to level 3, you have doctors that heal, hit surprisingly hard in melee and have decent ranged, and are level 2 limited, and scouts that are really vicious at range, especially if you get one that's Dextrous, but hit like a wet noodle in melee and are also level 2 limited. There's also phoenices, but those are weak scouts that are basically equivalent of bats. That's really, really low in terms of variety. Now I know male protagonist gets much more various unit types in advancements, but that just means everyone picking female to play as female protagonist in Wesnoth for a change shoots themself in the foot without even knowing it.

Another problem - playing this faction is like walking on eggshells. When everything you have has -30% resistances to everything except Arcane (and Fire, where it's -20%) - well that is a bit of a pain. Sure, high defenses (60% flat, 70% on most others) and everything, but that just means bad luck hurts significantly more. And if you lose units, your only recruits are level 0s or healers. Male units are even worse about this, as their defenses are barely better than normal (about 10% higher) and in no way compensate for -20% resistances. And then there are units whose defenses are only average, and they still have -10% resistances everywhere. And even worse, at level 1 they have terrible, TERRIBLE HP, with an average of 21. Even Guards, the aforementioned average def, -10% resistance, only have 22 HP at base (this btw gets them killed by a Dune Soldier in one round from full health if dune soldier lands both hits, barring Resilient trait in which case they live with 2 HP left). The only units with somewhat passable HP are captains who have 28. Sure, they level faster (due to requiring less at base and having Intelligent on all units), but they die like flies, and with aforementioned Level 0 recruits it's... yeah, not fun. At least Judge-line units can hold the line well (High defense+positive resistances+regeneration=movable wall that is hard to kill), but they still have bad HP on level 1, and they have literally zero offensive potential as all of their weapons are "defense only", so leveling them is nigh impossible.

I also didn't like how the protagonist cannot level above level 2. That just doesn't sit well with me, having a protagonist that is just... incomplete, compared to the rest of the troops. I bet it's even worse for male protagonist (where every unit can reach level 3, except the protagonist).

In general, those factors, combined with the fact that I got seriously trolled by RNG (I once had to reload 9 times to get a 49% chance to kill to actually kill, and there were many times when the enemy got 3-4 consecutive hits vs 70% defense) lead me to not enjoy playing this campaign much. The main draw of this campaign is the matchup (custom faction vs Dunefolk who are underused), except the problems with the faction, and the campaign feeling like a retread of AOI's story soured it to me by the end.
Top

Does anyone have a link to the campaign code? There are some typos I'd like to fix…
Top
Post Reply
10 posts • Page 1 of 1