It is said the Elvish Invasion of the Far North had been crushed by the might of Great Chief Kapou’e, Son of the Black-Eye. Little known was the part played by the Saurians of the Black Marshes. This is their yarn, perhaps the most significant in the downfall of the last of Landar's Elves.


The campaign revolves around Inarix, after she settles in the Black Marshes following the defeat of Shan Taum and the Human Army. I aimed for the campaign to be more of a short skirmish, in which the Saurians are rather weak compared to the opponents they face. The player is expected to rely on other advantages to attain victory, which I leave you to discover for yourselves. Further, you have a very small recruit list (only the two mainline Saurian default recruits, as well as two less conventional but lore-compatible mainline units), which I find is a handicap missing in mainline campaigns, which allow factions without healers and leaders to gain access to such units by means of custom units or 'borrowed' units from other factions. This addition of units kills the unique identity of factions and makes gameplay quite formulaic in the aspect of recruits for a large number of said campaigns.

All 7 scenarios, 6 battle and 1 dialogue-only, are balanced and completed.
The campaign is available on the 1.14 server.
Looking forward to feedback and constructive criticism. 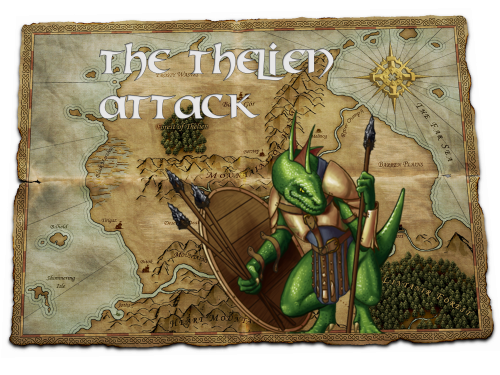 Hi, gweddeoran. I liked the available scenarios. It is cool to see mainline character in UMC campaign.
In the "Dangers In The Desert" objective says "Reach the signpost in the north-west", while it should be north-east.

I played first two scenarios on normal and the third on hard.

, I'll be sending an update soon with a new scenario and the fixing of the wording in the objectives.

I have a couple of questions-
1) Do you think the first scenario is too easy, I thought the first one would be interesting since you aren't expected to overwhelm the opponent.
2) Also, how difficult did you find the desert scenario?
The Thelien Attack (1.14)
Forgotten Conflicts (1.14)
The Revival of Halstead (1.12 and 1.14)
Top

gweddeoran wrote: 1) Do you think the first scenario is too easy, I thought the first one would be interesting since you aren't expected to overwhelm the opponent.
2) Also, how difficult did you find the desert scenario?

All 3 scenarios were easy to me, though they are anyway fun. The 4th scenario is much harder, I tried it several times and can't win yet.

Several notes.
It is unusual to see a leader with a loyal trait, since it don't require upkeep anyway.
The same about level 0 units, though they will have the loyal trait after advancement, so it may make sense.
It would be good to have a hint about the mudcrawler's ability. Otherwise they look useless in that scenario. I recruited several of them in my first attempt, but realized that I will loose before their ability was shown. The next time I didn't recruit them at all. Only your message about their ability made me curious, and I discovered their ability by looking into the code.
Author of SP scenario Dragon Fight and SP campaign Captured by a Nightmare.
Created The Rise of Wesnoth (alternative mechanics) version of the mainline campaign.
Top

Thanks for the feedback. I really appreciate it.

Were you referring to Inarix, I'll remove it for whichever leader it was.
Do you think the fourth scenario is too hard, or simply challenging? Also, is it on Normal or Nightmare?
I'll add some text in the beginning for the ability.
The Thelien Attack (1.14)
Forgotten Conflicts (1.14)
The Revival of Halstead (1.12 and 1.14)
Top

I noticed that Inarix has loyal trait, not sure about enemy leaders. In my opinion the scenario is too hard even on normal difficulty. Anyway it is definitely much harder than the previos scenarios. Especially hard things are:
1) Level 2 Woses. Player don't have units to effectively kill them. The only option is to run, but my units are slowed down/surrounded by fast elves. Also woses are invisible in the forest. Perhaps you should not allow enemy to recruit Woses, or allow only level 1 Woses. Alternatively, you could manually give a few woses to the enemy and don't allow to recruit more.
2) A lot of forest terrain. More flat terrain would be better. For example:
- Make some roads wider. Road width is usually 1 hex, maybe several areas with 2 hex road would be good.
- Less forest around villages will make them easier to capture and defend.
- There is a sandy area. It would be easier if there will be more sand instead of sandy hills and less forest around sand and mountains.
- Consider adding some sand around the lake.
Author of SP scenario Dragon Fight and SP campaign Captured by a Nightmare.
Created The Rise of Wesnoth (alternative mechanics) version of the mainline campaign.
Top

I played through a while ago, starting with only an Ambusher, a Soothsayer as veterans (I debugged through the previous scenarios).
Yet, I managed to get to the enemy leader on the first try. I agree the Woses are a pain, but there aren't many of them in the first place. How much gold did you start with? I used only 260 to recruit and recall.

I changed the map a bit and will increase starting gold. Also, I might reduce the reinforcements that arrive. However, you have to keep in mind that this is the heart of the elvish invasion, and you are trying to infiltrate with a much smaller army than one would normally expect for such an attack. Also, the campaign is said to be a Hard one, so that explains the difficulty.

I had 230 gold at the beginning. After I watched your replay I used the same tactic and won (played on normal difficulty). I noticed that you changed enemy leader, but there are 2 speeches in the scenario file that use id of the pevious leader.

Oops, I'll fix that.
Also, I changed the leader and reduced the gold in newer versions just in case. (Also gave her higher base income to account).
The Thelien Attack (1.14)
Forgotten Conflicts (1.14)
The Revival of Halstead (1.12 and 1.14)
Top

1) Added new scenario- "The Last of the Elves"
2) Balancing fixes in prior scenarios
3) Inarix has a slightly different sprite from the other Saurian Flankers (no new attacks, stat changes though, for balance purposes)