Hello everybody, I'm totally new here and don't know about customs, so please be patient with me little poor toddler. Well, I thought recently it could be an idea to make new attack buttons, and I tried to draw some of them.
Don't be afraid to shoot me down, it'll be a pleasure to die this way! Now I don't know if they are in te spirit of the game or not, but I tried them and I think the effect is not so bad. So what do you say?

Moderator action: topic split. From now on only finished icons go into this thread. Post your work in progress in this thread.

That lightbeam icon looks rather nice, and is more in the direction I'd like to move in. The important thing for us is to make these images not look like they have been 3d-rendered, which may have been the case for your early images.

In the future, post the icons at 100x100 pixels, or an even greater size. We are not strictly limited to 50x50, and we may want better source material.

Things to do: For that lightbeam icon, I would make sure the beams are antialiased. Some of them are, and look good because of it, some of them (especially the main beam) are not, and as such do not look good.

I've modified the lightbeam icon, and will commit what I've attached to this message.

Here we have a staff for all of the non-white mages (although they'd be fine with it to start out with), and an image of a weapon we don't quite have, but will need for the purpose of distinction - the quarterstaff. This is basically because now, the "staff.png" image ONLY looks appropriate in the hands of a mage. 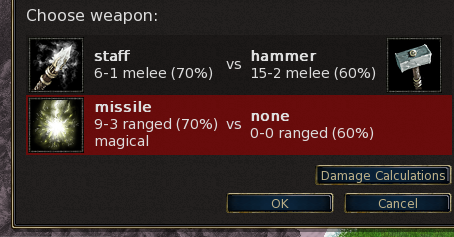 Leonhard wrote:I see the style you want, for me the last thing I've done is the hatchet, here with fabrication details. Maybe it is not WoW enough.

You are really close. REALLY close. The only thing we need to do now is rotate the hatchet about 15-20Ã‚Â°, azimuthally. That is to say, tilt it towards you.

This is unfortunately quite difficult, but this "dynamic" perspective is one of the biggest things that makes their icons look so good. I'd like all of our attack icons to no longer have the weapon in question parallel to the screen plane.

Thank you for continuing to work on these. When you make more, don't worry if the perspective doesn't quite look right, or the shading doesn't quite fit the WoW style. I can fix them, and having your work in hand to do that makes the task quite trivial.

Leonhard wrote:I work in 50x50 because it is faster than greater scales, but I'll see what I can do.

If this saves you time, then nevermind. Go ahead and keep working in 50x50.


Leonhard wrote:Your work is really impressive by the way

I presented here different options, tell me which you prefer.

Thanks for the compliment, your work is also quite good. Of the different options, I'd pick "bright not smoothed".


Leonhard wrote:EDIT: Is it all you have done? I'd rather not focus on something which has already been drawn real good

Besides these, I have a fireball, and a spear. In fact... here's the fireball, based on Zebulon's original (the spear is not ready).

FYI, I'm likely to tackle swords and daggers next.

Hi,
I made an axe and fist icons. I tried to draw the fist so that I could be used also with the zombies and trolls. Hope you like'em.

I also cut the handle of the sword from the new Konrad portrait and added the blade in it so it could be used as the sword icon. Yes, I know, cheap copy/paste artwork, but I think it works quite well here. Also defining the wesnothian sword design..

I've also zipped bigger versions of the icon weapons, if there was some use for them in the future. They aren't JUST the same ones in bigger size.

And the zip file..

Edited off of Pekka's axe.

Not exactly sure what caliber of axe this will get used for, since it does seem a bit on the small side.

Hello there, here is my new hatchet, in format 50x50 and 100x100. Perspective should be scientific, since I almost launched my computer by the window tryng to do some 3D modeling. What about colors?

Let's try how does this look: a kind of dwarvish battle axe. I drew the whole thing in school and I haven't seen it with my laptop yet. And wow, how fast and easy pixeling can get with a drawing tablet!? I want one too..


TÃƒÂºrin of the Black Sword wrote: Is the plan to not put these in-game until we have a complete set?


Here are some edits of the recent submissions - the Battle Axe by Pekka, the Tomahawk by Leonhard, and the Spear by Zebulon. Good job on that tomahawk, Leonhard - you've finally "gotten" the style. I'm looking forward to more work, and will of course be forging a good deal of my own.

I sometimes get in these situations where I'm compelled beyond my will to do something. This started out as a perfectly mundane elven bow, but no.. I just had to tart it up with sparklies.

Anyways, I think this would work for units like the wood/high elven marksman (and absolutely no one else). I'd also be making another elven bow to cater to the rest of the elves.

Here is my new mace. I think I'm really close from the desired style, but I don't know why I just can't reach it, so anybody feel free to edit it!

Boy, we're having a regular party in here:

Noyga: For reasons of iconification, I'd prefer if you didn't flip the images side-to-side. I personally think, based on the faint semblance of design instinct that I have, that it would look worse. If these were pictures of a character's face appearing on different sides of the screen, it might look good to mirror them, but for these I think it might detract from the images. I suppose part of my theory here is that these become visual symbols that people recognize, over time, and if we flip them, they essentially have twice the number of symbols to learn..

Leonhard: If you could make a "morning star" head, and possibly a chain, at something like 100x100, that would be grand. That mace is really good.

Pekka: I think we should stick to not showing the hands for the bow, since we can use the same image for many, many groups of creatures, then. The same "puny bow" can be used for orcs, trappers, human bowmen, and perhaps a number of unforseen UMC things. And I'm sorry about the engravings on the axe - I didn't actually touch them, it's just that the shading is different, now, and that part of the weapon is a whole lot darker than it was before.

In fact, for almost all weapons, unless they are part of the body (zombie fist, troll fist, fangs, claws) we should probably avoid drawing body parts at all cost.

Wayfarer: Pending an edit, yeah, that's pretty good. For guns like that, we'll want to zoom in on the muzzle.


And I got one thing done on my end, which took an unruly amount of time, but came out rather cool, I think. An icon for "faerie touch". The obligatory sparklies are present, as well as a consistent color scheme for elven magic, but I think what made this icon work is the motif of "crossing the threshold" between the real world and the faerie realm. Hopefully. If that isn't obvious to people, they can still look at it and go "ooh, shiny! - must be magic..", so we should be good in the intuition dept.

Getting the hand on this thing to look right, and then shading it consistently with the way everything else has been done was just a pain. At least I finally can manage such things.