So I ransacked some of the excellent artwork from Spacenoth and put together a space scenario.

Players must travel the galaxy, colonise planets, build a fleet and capture the enemy's homeworlds. It's kind of a cross between A New Land and High Seas, and partly inspired by Masters of Orion. When loading a GE map always remember to use the Galactic Empires Era!

I will post a full explanation of how it works when it is more developed. Right now I am still tweaking it a lot. Space itself is pretty uninteresting in terms of terrain. I guess space is like that, but it's not intentional - I couldn't get my head around how to make custom terrains work properly. Hopefully I'll add that later. Also, some of the high-level techs do not work yet, or work incorrectly. I am looking for suggestions on how to hone this scenario. Once I've got it working smoothly I will add some more maps. Oh, and give me your bugs!

This add-on has gone through many changes, but here's the official description: "Galactic Empires is a multiplayer sci-fi mod in which players are able to colonise planets, research futuristic technology and wage war both in space and on the ground. It includes an era with four factions, a terrain set and a series of maps. It's more or less a total conversion mod, but still uses Wesnoth's core gameplay mechanics."

And some screenshots to help explain how it works. 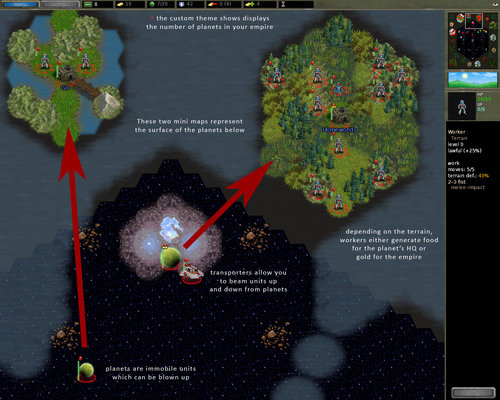 At game start, the Terrans are preparing their economy on their Green Giant homeworld. 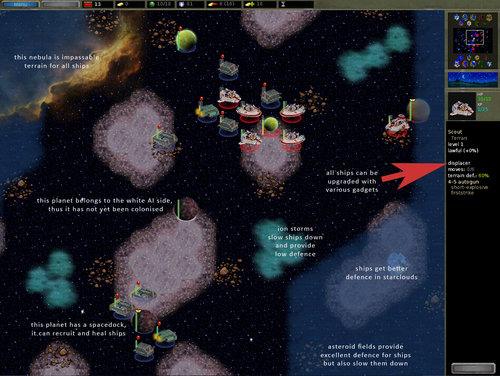 The Terrans have bested the Dwarthans in a scrappy dogfight around the green planet. Nearby a second Dwartha fleet is massing. 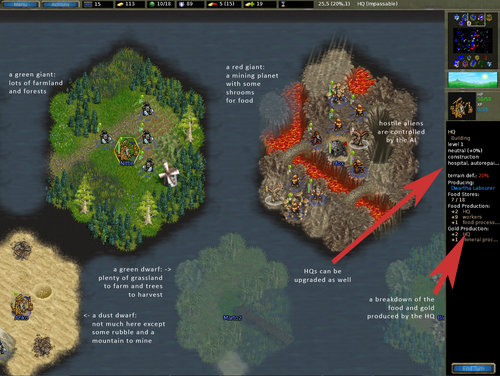 All is quiet on the Dwartha farm world of Nittle. Meanwhile an assault squad battles with some hostile braineaters on the mining planet of Ulox.

Klegg will join your side when killed which is annoying because you have to pay high upkeep and Klegg cannot be beamed.
Top

i have one thing so far:

for me it would be better/make more sense if the ships would be neutral, since there is no day/night shift in space anyway.

on planet surfaces it makes sense though, so keep the day/night sheme, but make only workers, soldiers and scientists and aliens and whatever is crawling out there lawful/chaotic.

also perhaps check that scrolling "bug". so when you scroll to a certain location of the map, your enmies wont scroll there

other than that its kinda great. well i can of course also live with lawful spaceships, but it just doesnt make sense for me

you may add some asteroid-fields in space, just like the ice-mountains in high seas which may provide +10defense for all ship, not many, and as said not high defnse bonus, really rare and just +10

but its really cool, great idea -
The best bet is your own, good Taste.
Top

hehe, btw we played together today - i had a different nick though -
and of course we played after that more game, improving our economic setup

whatever i see you made somehting about the balance which is great,
the 5 Movement make the fighters way better playable.

however, now i have the feeling that they are a bit overdone, i recognized that you gave em also 42 HP - ... now the fighters simply rule, getting scouts is now almost useless.

remember with their -20resist/50def they are already weaker then fighter with 0resist/40def
atm they are completey out of bound, imo

and another thing came to my mind after thinking:
while it is true that in standard wesnoth some units lvl2 units may have 12-3, the AVERAGE HP number is higher though. there are no traits like resilient, for example, therre is better terrain to hide. so after all 12-3 for intercepter may be a bit too high.

11-3 would be still high and pretty devastating,and would fit pretty much with the role of the interceptor. its just 3 damage les, but i guess it would be better.


and just another thing, while playing ...

so fighters rule now which is somehow intended and ok, (though 32 HP for scout wouldn harm, and i really vote for that), but the cruiser is now completely obsolet.

additionally it sucks if you can destroy plnates with fighters. really that is annyoing,after a won battle your 5 fighters also destroy the planet thats just silly.

i suggets tomake plantes basicall invulnerable to heat, explosion... whatever.

only antimatter has +50% versus planets, this would also give the cruiser a new and unique role and fits a lot more. by now you just need to get fighters and own everythign, scouts, planetes all.

with +2 HP for scouts and PLanetes immune to basically everyhting but antimatter, the fighter wont get weaker, but the scout maybe last a bit more and to destroy a planet you have to bring a cruiser or instead of destryoing you must invade it. but shooting it with fighters and scouts to a pulp dosent fit.

and also interceptor maybe better with 11-3

my tweaking suggestions
The best bet is your own, good Taste.
Top

Just a comment, I think that the +2hp for scouts with that -20% resist doesn't make any real difference imo.
At least, not against that lazer attack of fighters, which is 7-3 at night, and 10-3 during the day against scouts.

Also, a bug/exploit is how you can beam a unit up, then beam him down, and it'll have full hp again.
It makes hospitals absolutely useless, and it's really exploitable against aliens, and probably invading the enemy homeworld too.
Top

Really fighters should be better than scouts.

Bob shoots Mabuse in the face.

Everyone is happy.
Top

Kalis wrote:Just a comment, I think that the +2hp for scouts with that -20% resist doesn't make any real difference imo.
At least, not against that lazer attack of fighters, which is 7-3 at night, and 10-3 during the day against scouts.

umm, not that it would be important if it would make a difference against fighters, its just that the numbers dont fit.

so its always 4/5 hits that are required, and not 3.
the tech argument dont really apply here since you get them almost automatically, hence the 2 scientists at start.

also its a contradiction, you say "scout shouldn be able to compete with fighters" since they dont require any upgrade, but the solution you suggest makes the scout much stronger than my 2 HP

btw, scouts are not healable at docks ?


Kalis wrote: Also, a bug/exploit is how you can beam a unit up, then beam him down, and it'll have full hp again.
It makes hospitals absolutely useless, and it's really exploitable against aliens, and probably invading the enemy homeworld too.

for me its no "bug" exploit, its a game feature. leave the trasporter there for healing unless they dealt with the aliens or not ?

and yes, hospitals may be useless.
at least i never buy them and i also dont miss them.

that healing thing is also a good when you get a bit unlucky versus the creeps, and last but not least: leaving a transport beside a planet doing nothing but heal a soldier per round is quite a sacrifice.
Last edited by Mabuse on September 18th, 2008, 9:39 am, edited 1 time in total.
The best bet is your own, good Taste.
Top

i think it was funny^^
Top

This map rules too good bob

btw, did i mention that i can very well live with the sets as they actually are

the only thing i'd really suggest is to make planets way more resistant to all damage types but antimatter.
The best bet is your own, good Taste.
Top

they're healable.
It's just 4hp heals takes forever to heal, especially combined with the -20% resist thing.

As for transport healing...
So does that mean if you get hit with a poison bomb
you can teleport out, and then teleport right back in and have fully healed guys?

And finally... what are you talking about being forced to leave the transport there?
you move to the planet (previous turn), and drop
then you teleport up, teleport them back down, then move the transport away.

Or if you're invading the enemy planet with soldiers, you can keep teleporting weakened guys out and teleport them back in full health and ready to attack again?


And sorry, I meant 27hp for the scouts rather than 28

Bob, could you answer a few questions please?
1. Which file has the soldier rifle attack increase in it? I wasn't able to find it.
Is it just ballistics 2? Or is it ballistics2 and warp 2?
2. Are you able to make more than 1 new civilian each turn? I noticed your homeworld can get 40 food production if completely filled...
3. Does teleporter allow you to teleport to FRIENDLY cities, or all? I can't imagine it being all that balanaced if it's all since you could teleport to the enemy homeworlds...

In any case, some tech suggestions:
1. GM farms should probably be a 50% reduction rather than 25%. 15 food is still a pain to get. 10 food can be harvested from the 10 forest slots though (freeing up 5 workers). Getting genetics 3 really isn't easy. Also, cost should probably be at 15 or so (sure you free up 5 workers, but you need to transport them elsewhere to use).
2. Nanomines are far too expensive at 40 gold. Even if you have 15 workers in your homeworld, it takes 3 turns to pay off the cost. The cost should be 15 or so.
3. Self-repair should be nano-tech 1. Since you get repair ships at warp1 nano2, it makes them obsolete (25 gold repair ship vs 15 gold gadget?). Or severely reduce the cost of self-repair to like 6 or 7...
4. Cloak seems useless. ambush adds nothing right? just lets you be invisible. Unless it gives backstab as well or something, it's not worth that 20 gold at all...
5. Radar needs to give more than +2 sight, sine planets only have 1 sight... maybe +5 or +6, so it can see around it like a scout?
6. Gaiacology should probably be available at level 1 Genetics, for 20 gold, for that 10 healing...

Another interesting senario. I'd like to sugest, that you include some more interesting terrain for the space battles.

Also, not sure if anyone has mentioned this yet, but it seems that you would be able to auto repair your soldeirs by beaming them up, then down again. You may wish to fix this by making it so that a transport can only upload units or download units in one turn or something.
"There are two kinds of old men in the world. The kind who didn't go to war and who say that they should have lived fast died young and left a handsome corpse and the old men who did go to war and who say that there is no such thing as a handsome corpse."
Top
Post Reply
529 posts