Athena: Took some flesh off her smile, aligned her cheekbones, added some contrast to her eyes. I think I will call her finished.. 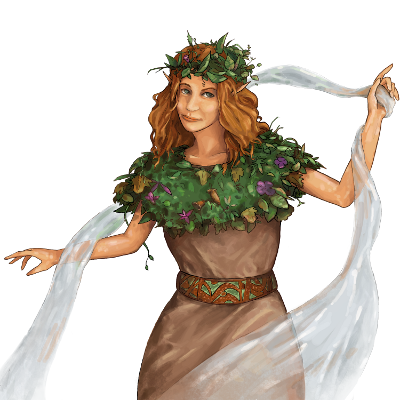 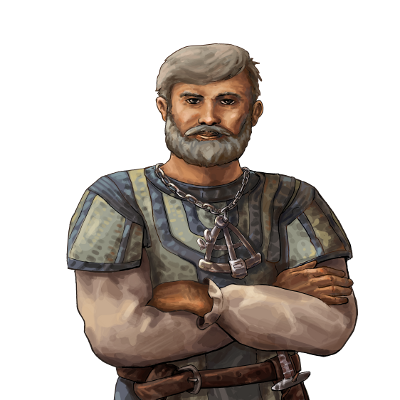 You truly have a gift.
My MP campaigns
Gobowars
The Altaz Mariners - with Bob the Mighty
Top

The portraits are nice and consistent!

But the way you paint materials is somehow sloppy, also the skin colour of everyone is too orange, I made a quick rough sketch on the head to show what I mean!
Top

It especially makes me notice how 'fake' a hair my version had, and I decided to give him some further revision for that (soon). For the color issue you mentioned however, if you look around at people enjoying a sunny day you will see human complexion do tend to shift to shades of orange (at the very least, here in California

Well, I have a WIP for Doctor Morteau. Main reason I'm posting it at this stage is, to have a go for the idea of a dissected frog he's holding. I like the idea myself, because if you think about it, modern medicine do stem from Necromancy to some extent (playing with cadevers part that is, which otherwise was a taboo). Anyway, so what do you guys think? 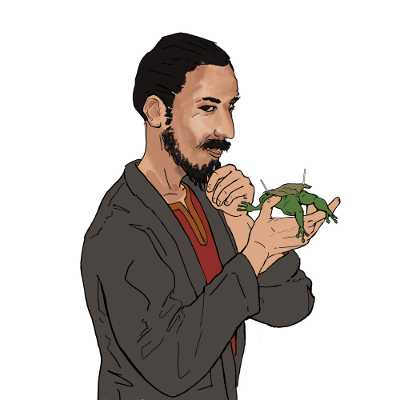 It's a neat idea, but I'm not sure about the frog. I'd feel a bit unnerved if someone was constantly prodding a dead frog while talking to me. Also, it's worth bearing in mind that Dr Morteau's is a Dark Sorcerer, so some concession should probably be made towards making the portrait fit the unit sprite a little bit. I know jb posted an image from Forbidden Planet, and you've captured some of what that had, but our guy needs to be stern with a hint of megalomania. Think evil scientist mixed with fascist occultist.

For the Morteau portrait, I have a couple of issues regarding what you said. Firstly, matching sprites has never been my concern for the campaign, since these are not generic unit portraits. Also, I wish you had put in those bit of information about him before I started the portrait. So... Instead of redoing him I tried to contend myself adding a touch of frown and packing all those additional characteristics you mentioned into his eyes!

For the frog: I understand what you say. However, portraits infer more than a visual effect to the dialog screens imo. They should also entail personality, traits etc of that character. I could just draw him with a piece of wizardly stave, but would that distinguish him as a meta-scientist? Well, it wouldn't - that's why I felt the necessity of a special artifact/object. I should admit, I didn't put too much of thought for what that could be, and I believe it'd be really great if designers would come up with such details (the necklace of the Alderot portrait, for example worked nicely in that respect). Anyway, I still like the frog idea myself. For me the only problem is at technical level, whether the player will manage to read it as frog or not. Unless you have some other item on mind that could be swapped with that poor froggie, or any other issues that I have missed, I will call this one finished too. 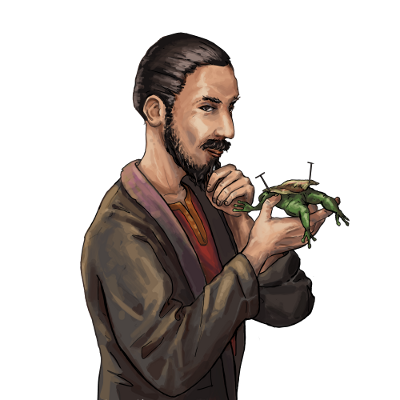 Point taken about the additional infomation. I'll make sure to give you all the facts up front next time!

Now that I've seen this version, I think I can forget about the unit sprite. It's really nice. That distracted, bemused smile says a lot.
My current projects:
MP pirate campaign: The Altaz Mariners
RPG sequel: Return to Trent
MP stealth campaign: Den of Thieves
Top

Some people may have faces like this, but I think his upper lip is pretty long. This is possibly caused by there being a space between his nose and his mustache (sorry to say this this late in the process...).

The frog is okay, but just in case, some other ideas of things that say "science" but could also say "magic": maybe an erlenmeyer or a "balloon"(not sure of the word) with some kind of mixture in it? A skull might also work, although it might be a bit too necromancy.
Jazz is not dead, it just smells funny - Frank Zappa
Current projects: Internet meme Era, The Settlers of Wesnoth
Top

As far as my perception goes, the frog was instantly recognizable as a frog, even before shading (btw aren't frogs red inside, not grayish brown?).
And a frog is imho good idea, because frogs are among those that can move after death, like when you poke it with something.

But, before I read the text, I thought the character would say: 'Delicious! Would you prefer it raw or cooked? Baked in butter perhaps?'
And that would make him a chef, I guess.

If you wanted a more scientist look, maybe the frog could be on a miniature dissection board to reduce the 'good appetite' feeling.

EDIT: Some more nitpicks, that were invisible at first (which might mean they are really extremely minor and no problem).
The ear looks a bit unusually small and round.
The neck looks way too thin, especially if compared to the thickness of the arms, and even more so, the palms of the hands that look quite strong.
The collar of the shirt under the jacket seems to hint that he is wearing the shirt more on his right side.
There should be some more skin between the thumb and the palm of the hand of his right hand.
campaign ruthless in your nearest 1.11 add-on server
some wesnoth-related drawings
Top

Well, so no frog then!

I guess... Being not much of an imaginative person all I could come up as an alternative was a piece of bone, oh and it glows! It could be executed in a better manner, choosing the bone as prime light source and making that more obvious, but I'm afraid that'd mean shading him all over again, which, I can not do. I have also did a few minor touches on Alderot&Athena portraits. In order not to clutter the forum, simply I edited my earlier post which shows them both. Oh and I'm pm'ed transparent version of Morteau (this one is not transparent, to show the glow).

As I have told you guys on mp lobby, I also wished to redo Largo and Hugo portraits to make them better fit their personalities. I lost my work files so can't retouch them, that's why. Let's follow a plan though: This time tell me exactly what you want, what manner of objects you wish them to carry, etc, that's - feed in as much information about them as you can, they're your kids after all. And when I have the time, I'll have a look. Till then sayonara. 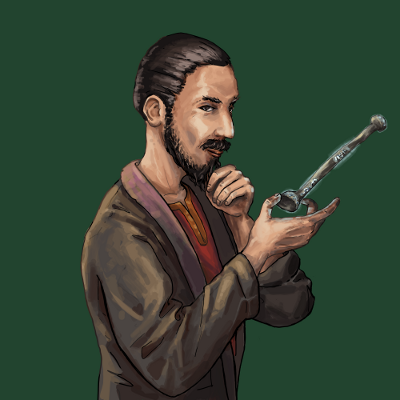 It's hard telling it's a bone - personnally, before reading your post, I thought it was some kind of weird scroll... The way he holds it is also a bit unusual, but I understand you don't want to redo the hand. I still think an erlenmeyer with some kind of liquid in might fit. Although I don't really know the character, so...
Jazz is not dead, it just smells funny - Frank Zappa
Current projects: Internet meme Era, The Settlers of Wesnoth
Top

Hi Bera. jb and I are working on another update to The Altaz Mariners and wondered if you were still around and interested in making a few new portraits for us?

Here's a few characters that could do with their own portrait:

Captain Athos (Duelist) A prosperous merchant sailor on Fort Bastille. He is a law abiding man with a suave charm, perhaps somewhat like Errol Flynn.

Solane (Arch Mage) An elderly and eccentric mage who lives alone. Although she might give the impression of being a senile old woman, her powers and wit are very much intact. I picture her as a cross between the current female silver mage portrait and a less glamorous Angela Lansbury.

Certainly... I need to think for a while though, and I am also currently busy on something else. I guess I can post something
for Athos sooner or later, feel free to provide any quirks equipment or whatever you'd like to see with him, till then. Same goes for
Solane as well.
comics, comics
Top

Got some time to work on the remainder of the portraits... Has been a while I know. Well, so here's a sketch for Captain Athos.
This is just the pencils, and not necessarily the final one - if there're certain accesories or important changes you'd like to see
let's better settle them at this point. I am considering to paint the whole figure but it'll be his upper body that will actually matter. 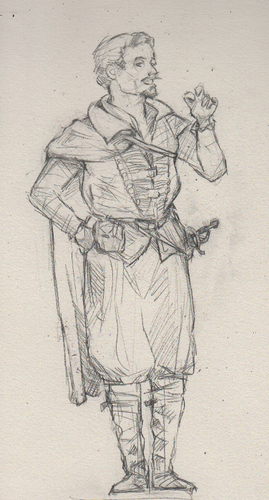 bera wrote:Athena: Took some flesh off her smile, aligned her cheekbones, added some contrast to her eyes. I think I will call her finished..

Athena:
Unless you deliberately wanted her to have semi-puckered lips (which is a nice expression), maybe moving her mouth a bit or shortening them might help. It looks like they go a bit too much to the left.
To get a more youthfull loo ply with the shading on the sheekbones and the nose. especialyl the lines that go from the nose to sides of the mouth.

Alderot:
Looks a tad stretched.
Light travels much faster than sound, that's why some people seem bright until you hear them speak.