You get to keep all surviving Peasants and Ruffians (or level 1 advancements) you recruited in scenario 1.
Normally they aren't worth recalling. Only if they got lots of XP feeded they make a nice unit variation.
But if you lose all recruits don't worry - the Ukian units are at least on par.

Usually I'm happy if I'm able to advance 1 unit. The last time I was lucky with a Ruffian (now Highwayman) and two Peasants (now Halberdier and Master Bowman).

In scenario 2 there is another Peasant. I was able to feed him enough kills to be worth recalling (now Royal Guard).
Top

Oh okay I see... I usually fed them as a screen for the more powerful units to get some kills... Having some loyal units fighting good during day time will help a great deal along the campaign....

Let's see how it will go on but for sure much better than the first trial.
-WAR- Wesnoth Allied Rebels
Top

Hmmm before assaulting fort Kuhle, I am not sure about the following statement:
The cavalry chasing the hero disappears? Is it normal? Now I can make 20 skirmish before attacking Fort Kuhle if I wish (I don't but still it's a possibility...)
-WAR- Wesnoth Allied Rebels
Top

I finally reached the last level. I found it very hard to beat - in fact, I never finished it. There is a problem with the number of newly generated units at every turn. After 33 turns, the AI becomes impossibly slow. It takes a lot to move the monsters and at least one new monster is generated every turn. After turn 56, when it became clear that the mission is not going to end, I stopped. I had played for more than 4 hours. It seems to me that Wesnoth engine just cannot handle too large number of units. -- It may be a problem on macs only, but I remember when I played v1.4 on windows, there was a similar problem with some missions, only not so terrible.

In a way I think the unlimited number of enemies is part of the beauty of the campaign, but I don't think the current Wesnoth engine is fine with that. Anyway, I think this is the most interesting campaign and it would be a shame to disappear as others (A New Order comes to mind) did. So I can't wait for version 1.0.
Top

The disappearing horse is a bug, but I don't believe it is a show stopper. It's not fixed because I need to redesign that part of the "world map" scenarios. The idea behind the cavalry was to make it more difficult to play skirmish scenario 20+ times, as you guessed, but for now it is possible (though probably boring).

Thanks. You are correct, the AI turns get way too slow. That scenario sort of runs out of steam anyway, I am revising it. There will be more monster and Primevalist variety. Moving the spawn points might also help. It didn't occur to me it would drag on for 4 hours, I'll get this updated soon.
Top

Downed by the Water:
Feels unpolished; units from recall list and fresh units are mixed.

Mount Tien:
The units of the Primeval Goddess had no chance to reach me before I made it to the western path.

Snowblind:
I have the two Orc units (Crossbowman and Warrior) from Mount Tien in my recall list.
Raenna (after transformation to a Dark Herald) has a red circle althoug she is in the green team now.

Heavens Gate:
The changing objectives are kind of tomato surprises: I won barely on my first play. But if you move Belleros (after recruiting) directly North and send the Orc (after recruiting) NW hiding in the mountains the scenario should be easy.

All Dreams Die:
This looks like an epic end to a very nice campaign: The humans involved in the clash of two godlike races.
Storywise it's a good thing that mere humans (Raenna, Belleros and me(!)) don't know how the scenario evolves.
But to play (and win) this scenario without knowing what will happen there is way to much room for errors:
- I spent all of Raennas gold recruiting level 2 units in the initial keep. Now I think I should have starting recruitment only after reaching the target keep (save money on upkeep). The recruitments should be only so much level 1 units to keep the Chimera busy till Belleros arrives. I should let Belleros reach the monolith despite Raennas objective.Then spend all money on recruitment and go in.
- I spent all of Belleros money in the initial keep for a nice strikeforce. Big mistake!
At first I moved most units into the target area. After touching the monolith I lost control over the units. Raenna didn't have a chance against my nice strike force.
Then I decided to leave most units outside. Big mistake. My strike force is now in a stalemate with Ares (although I think he should be able to defeat it ...) preventing him from reaching the mountain and therefore from recruiting.
Now the Khthon flood the mountain cave completely unhindered. Raenna doesn't have a chance. Her few units which went in too are already dead.
(see attached save game)
Should Belleros recruit only some units? This could be a big mistake too (much gold left for recruitment _in_ the cave after the AI takes control).
Does Belleros need to delay Ares a few turns? How much units are enough?
- IMHO the key to win this scenario is to know when to recruit/recall, where, which units and how much for both Raenna and Belleros to balance the power of the other factions. To gain this knowledge this looks like a painful process (starting over a long scenario).

Thanks for the feedback, Theron. The humans should be in the dark, but the last scenario should not be as confusing as that. I will try to clear it up in the next version.
Top

I just won "All Dreams Die".
The strategie I outlined in my last post worked quite well.
To help the player to find a winner strategy:
- think about removing Raennas initial keep and give her 1 or 2 additional level 1 units
- bring Belleros on an early turn into play so Raenna won't waste time on her way to the mountain keep
- think about removing Belleros initial keep and give him 4 to 6 recalls
- or think about limiting Belleros recruits/recalls to 1 turn (because he knows Ares is coming)
- Belleros should arrive at the mountain keep shortly after Raenna (having only a few units which should delay Ares)
Make it a real race to the mountain.
My game was rather easy after that - maybe too easy.

Item problem:
brown ring at 15,3 does not trigger

Dialog problem:
[message]
speaker=Raenna
message= _ "Carghanna told me. She has a plan to save us."
[/message]
Should be told by Belleros, shouldn't it? 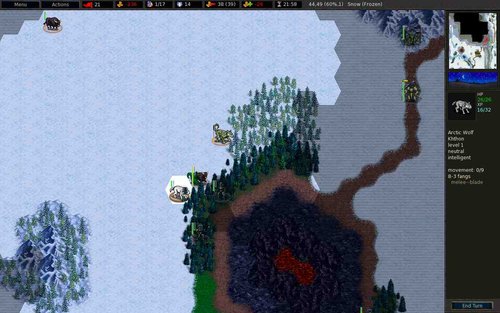 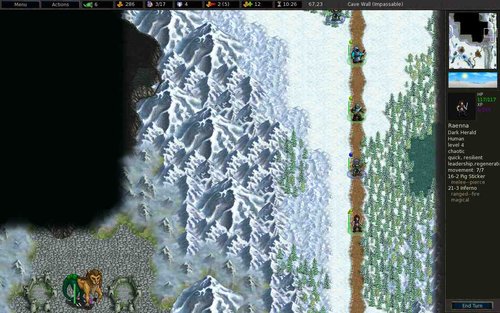 0.6.5 just went to the server. Not everything is fixed yet, but at least the final scenario should be better.
Raenna's side has two new unit types, the beasts have two new unit types. The AI has fewer units to shuffle around.


Theron wrote:My game was rather easy after that - maybe too easy.

I agree, it does sort of fall apart at the end. I hope to fix that soon.
Top

Just played the end scenario on 0.6.5 (hard) for the first time.

With the changes Theron suggested it seems pretty intuitive what to do when when i played. My only real problem now is how do I finish the game?

I'm holding the sphere, the mission states I should now go to the snow, even though I have the conflicting message that I need to go to lava in the dialogue. Standing on the snow dont make things progress further so do I need to go to some lava and exactly what pile of lava do I need to go to in that case?
Top

Standing next to any lava south of the cavern area should work. When I tested it, the small string of hexes running north-south out of the cave (in the mountains) successfully triggered it.

EDIT: I guess I forgot to update the objective. I'm still working on that ending.
Top

Scenario Royal Rumble, the second wave of cavalry coming from the South does not move.
-WAR- Wesnoth Allied Rebels
Top

doofus-01 wrote:Standing next to any lava south of the cavern area should work. When I tested it, the small string of hexes running north-south out of the cave (in the mountains) successfully triggered it.

Nothing happening here. Thats the way I reached the snow.

The lava at the left cave exit isn't far enough in the south (condition is y=37-70).
I had choosen this path too but was lucky to have a random lava spot appear in the snow.
Top

Theron wrote:The lava at the left cave exit isn't far enough in the south (condition is y=37-70).
I had choosen this path too but was lucky to have a random lava spot appear in the snow.

Thanks Theron, that was exactly the problem. Walking to the middle exit did the trick.