Longbow wrote:Only thing I dislike is the lack of ''green'' in favour of a mainly brown but my opinion doesn't matter, great work though

The scenario these are being made for takes place in the far future of Wesnoth, in which Wesnoth was destroyed and the world was baked by a pair of suns. These elves are desert dwellers, not forest dwellers. It make more sense for them to be dressed in more earthy tones than green.

exactly what scienceguy said.
galas starts out in one of the last green spots of the world but the rest of the story takes place in a harsh deserted environment and i wanted his clothes to reflect that. and he is part of an elvish people living thousands of years after the normal green wood elves we are used in wesnoth, thus i wanted his appearance to be different yet similar to them.
Top

Sorry, I assumed that as they used the wood elf sprites and were essentially living in a wooded valley, that they dressed the same. I guess you are right about the warmer desert climate and all...

amazing stuff
...please remember that "IT'S" ALWAYS MEANS "IT IS" and "ITS" IS WHAT YOU USE TO INDICATE POSSESSION BY "IT".--scott

Arr, a bit late to say this, and it's probably not going to change anything even if I do, but his pose looks very... posing. Like something that you don't really see in the real world, more like in a fashion magazine or some other clothing advertisement.

It's nothing serious really, but gives a certain gigolo feeling to it - something I myself am not especially fond of (revolting), and something that doesn't exactly fit in with the impression of someone with any training for combat.

I guess it kinda goes with the youthfulness, but personally I would suggest a less relaxed position for someone wielding an item meant for killing things.
For the dark gods!
Top

longbow: no need to blush, i'm sure a green wood elf would have worked, too, but doing something a bit different was just more interesting for me...

girgistan: late indeed... your right, of course: it's a posing pose. the idea behind it was to keep an element of the predecessor portrait which shows a young elf with a katana over his shoulder... and i kind of like it for a hero. i figure i'm getting problems with comming up with natural looking portrait poses which i haven't already used for wesnoth... on the other hand one could start thinking *when* these portraits are produced. are they kind of snapshots? or is it an appointed portrait painting session? both approaches would result in very different poses. however -i still wait what shadow master will say about him...

and a new wip - elynia.
if you are interested in detailed character descriptions go here. basically she kind of looks like an elvish maiden but is very, very old. powerful but melancholic - lots of contradictionary stuff... 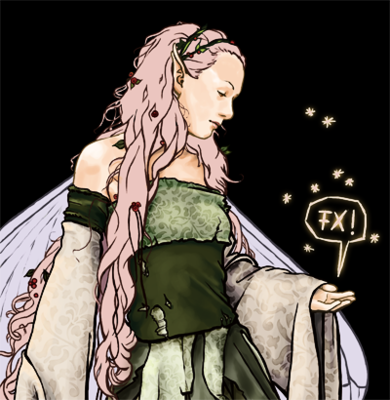 Galas... alas! The individual elements of the portrait are great but the pose, as Girgistan said... My first reaction was here you are trying to bend the gender stereotypes again because this is a very girlish posture and it doesn't fit his description in my humble opinion.
http://www.wesnoth.org/wiki/User:Sapient... "Looks like your skills saved us again. Uh, well at least, they saved Soarin's apple pie."
Top

(i still hope you will get to default factions portraits other than rebels & magi, some day... they'd really deserve your touch)
Top

update on elynia... (the wings and fx are transparent but don't work well on the lightblue forum, hence the black background)

sapient: thanks. and about galas - as i said, i don't really have a problem with his pose... he is the young hero. but i can understand where you come from.

syntax error: thank you! mainline will definitely be the next project after IftU - dunno which fraction but certainly not another campaign. i look forward do do something coherent next! 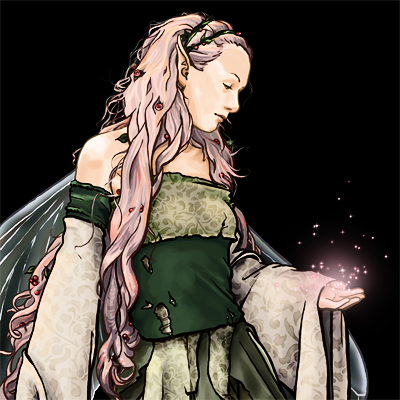 Any chance this campaign will go to mainline in the future? I hope this isn't already been answered somewhere obvious...
Top

Intriguing. You've certainly set up a real young vs old tension in this portrait - the smooth, unlined skin and upright posture suggest youth, while the grey hair and downcast wings and gaze suggest age. As usual, the shading and linework is excellent, though I find the borders between the solid green and patterned cream fabrics to be quite bold.

I must confess kitty, I'm curious - do you consciously map out the features you're going to use to suggest a character's nature and personality, or do you sketch without preconceived notions of how individual elements might tie in to the broader picture?
"Pure logic is the ruin of the spirit." - Antoine de Saint-Exupéry
Top

Sorry for my absence, but RL is really making it impossible for me to keep up to date

. I'll try to, though, make my way to the capital from time to time to check this thread.

Anyway, what can I say... Galas' portrait is really awesome. Just what I expected and wanted for him. Regarding Elynia, the portrait is excellent too; it conveys perfectly the profile and the background story which I'm still developing. The uncovered forehead bothers me a bit, but it's nothing serious, it is just that I don't see an ancient elvish maiden every day on the street

. It also leaves room for a few changes in the sprite department (more excercise for me, yays, and this time guided).

Longbow, the issue is that he is part of a patrol group; they go out of the valley to the surrounding desert from time to time, to clean any barbarians threatening their peace, help the unlucky wayfarers, and stop foreign raids. The members of such patrols must be adapted to fight in the desert (camouflage and stuff). I know that there was little emphasis on that in the dialogues; those details were stated in the story text screens which very few people read carefully.


kitty wrote:the skin looks so nice in phosho and here it looks like a peach.

Perhaps it is because you are using the default forum theme (the reddish hue one)? I am personally using the old blueish theme and they look great.

I need them on the old opaque 205x205 and the new transparent format(s?), since I don't quite manage to achieve the same results you do the times I've tried to do the scale-down + sharpening with the GIMP.

Also note, I'll be away for a time and I'll need someone else to do the commits once each portrait is ready. Anyway, I hope my loyal fans try to keep backups of this thread in case anything bad occurs to the forum again.

P.S. I'll personally stab anyone who comes up with the lack-of-greenishness argument again.
Last edited by Iris on October 30th, 2008, 3:51 pm, edited 1 time in total.
Reason: Removed comment about hair oversaturation - it doesn't matter anyway; changed other comments.
Author of the unofficial UtBS sequels Invasion from the Unknown and After the Storm (now available for Wesnoth 1.14).
Top

next wip - anlindë (can't keep her name in mind and always get the spelling wrong - i hate strange umlauts!).
she is kind of galas' stepmother, pretty old for an elf and has a dark secret in her past...


bad dog i don't know if it is answered anywhere obvious, but yes, we hope to get IftU mainlined. when that will be the case should shadow master know.

sangel thanks! perhaps i'll tone down some of the stronger lines, the fabric was originally darker and they worked better against it. concerning your question - i've got pretty detailed character descriptions by ignacio, i then try to bring them down to about three adjectives that describe the character and then try to find colours/accessoires/poses that could fit it - and then i hope that it works...

shadow master that's a pitty! i hope you'll find a way to get it fixed somehow - good luck! i had looked forward to get your feedback if my depictions fit the way you envisioned your characters... but anyways - i'll try to do my best and you'll have to live with what i come up.
oh, and concerning my colour on the forum problem - it was quite a banal one. generally the colours look fine but if i post pics too big the forum software shrinks them down. and by that the preview pic isn't only pixelated but also the colours get messed up.
and i'll post all required sizes then.

mica thank you! didn't know that you have commiting rights! 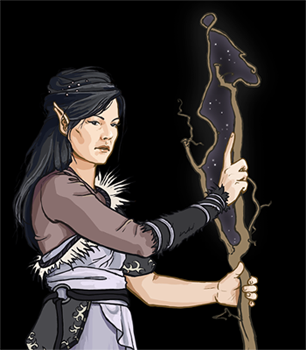 Yes, Wesnoth UMC Development is a separate SVN that UMC authors can commit to if they wish to keep their content up there.

And can we have 205x205 black background versions of all portraits, as well as the 400x400 [or whatever you work with] transparent versions?
Mica says one who cheats, cheats himself.

You are an Elvish Shyde - Beautiful, natural, and helpful, though sometimes under-appreciated.
Top
Post Reply
169 posts