Forum rules
Before posting critique in this forum, you must read the following thread:
Post Reply
123 posts

I'll post it in art contributions for now, because I'm awesome;

The current monsters are hardly sufficient to allow for a good variety of opponents as mudcrawlers are pretty much the only ones around that can be considered of "normal" strenght (and who made them?)

And ofcourse some excessively powerfull units that make the armageddon drake seem like a pansy are needed aswell; with nearly all dungeon-based scenarios comming with insane powerups;

imp: level 0 dungeon creep, rather fast with a pierce or blade claw melee attack and a relatively weak fire breath for ranged; should appear a lot

Skeletal Demon: I'd say a level 2 creep, it lacks a ranged attack but is resist to nearly everything but blunt and holy; and has a devestating drain-blade melee attack.

Satyr: a quick skirmisher with good evasion (60-70 I'd say); I'd say satyr are more special-based, so will come with evil status effects or something.


- Furthermore, I'd really like to hear everyone's suggestions for creep designs, keep in mind that there should be a great variety in resistances, damage types and other stats to keep it balanced;

currently you can't possibly get far in Dwarvish Treasure with a Dark Adept, due to the bats and walking corpses.

Every dungeon needs rats. I imagine they would be L0, low HP, good dodge, and perhaps a poisoned bite.
Feel free to PM me if you start a new terrain oriented thread. It's easy for me to miss them among all the other art threads.
-> What i might be working on
Attempting Lucidity
Top

also look at the cool comparison between my old skeletal dragon and the new skeletal demon, improvement or what?

I think blobs are important, rats and blobs both have a long history in gaming as being rubbish weak creatures that rubbish weak people kill.

That being said blobs are a bit stupid as well, but i'm such Neorice can design some cool one that can lurk around amoung mushrooms and slimey cave corners.

most awesome unit ever

There it's done, this is a good example of what to expect for the really "zomg unfair"-powerfull creeps, that are really only for use in those weird stat-boost scenarios. 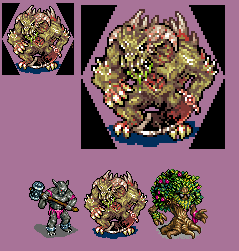 Looks zomg awesome. And this is intended to be a regulary spawning creep? Scary!
I was working on the proof of one of my poems all the morning, and took out a comma. In the afternoon I put it back again. -- Oscar Wilde
Top

Nah, this is obviously a guardian of somekind; having multiple of those moving around would be too insane

Looks awesome, though I'm tempted to denounce it as too big.

Can't quite tell what s going on with his left hand...
Top

They are so awesome that I had to make up a new euphemism for the f-word to describe their awesomidity.
Top

Pic wrote:I think blobs are important, rats and blobs both have a long history in gaming as being rubbish weak creatures that rubbish weak people kill.

That being said blobs are a bit stupid as well, but i'm such Neorice can design some cool one that can lurk around amoung mushrooms and slimey cave corners.

You mean like the gelatinous hex? http://www.wesnoth.org/forum/viewtopic.php?t=9617
Of course, I have faith that NR could actually do a good job on it unlike my comedic hack. But seriously, dungeon creeps are cool. Some things that could really be cool for dungeon type scenarios:

bat swarms. Yeah we already have giant bats, but a swarm of small bats would be cool. swarm + drain = nasty.

Giant worms. Think dune or tremors. Big enough to dig their own tunnels. Has mining ability. Heck, maybe has improved mining ability where it changes the cave wall into a cave without using up all of its movepoints.

Blobs/gelatinous hexes/etc... Slow + drain attack. If damaged (by anything but fire) blobs spawns a copy of itself in empty adjacent hex with hp = the amount of damage the blob took. Low xp required for a full heal
amla.

Lava dragon. Giant creature. In fact, you only see its head/neck and maybe claws sticking out of the lava except when it strikes. Only moves in lava and hence can only attack hexes adjacent to or in lava. Devestating damage, high hitpoints. Best bet is to avoid it at all costs. Useful in scenarios where you are expected NOT to be able to destroy all creatures but rather are fleeing/sneaking to some exitway.

Cave Maw. Think Empire Strikes Back asteroid creature. Enter at your own peril. Maybe more of a terrain feature than a creature, but heck...

How about some golem guards?
Gargoyles?
Imps and demons?
Mummies?
Will'o'the'wisps?
Top

No, no, no what you need it DEFEATED ZOMBIES!

From all those old zombie battles. Chopping a zombie in half dosn't quite kill it does it?
What about all of then zombie halfs dragging themselves along mindlessly, or all of them other lopped off bits and bobs that wern't put in the army stew pot?
Top

The Gazer should have ranged Backstab. Possibly both backstab and magical on the same attack.
It's all fun and games until someone loses a lawsuit. Oh, and by the way, sending me private messages won't work. :/ If you must contact me, there's an e-mail address listed on the website in my profile.
Top

however I'm not sure about all those other monster ideas, as they appear to require new abillities/heavy wml stuff, which doesn't make for happy neo.
Signature dropped due to use of img tag
Top
Post Reply
123 posts