Forum rules
Before posting critique in this forum, you must read the following thread:
Post Reply
6 posts • Page 1 of 1

Here i want to post arts by our artist PixelCharles. He made it 2 or 3 years ago. So, you can use it if you want.
For free ^__^ 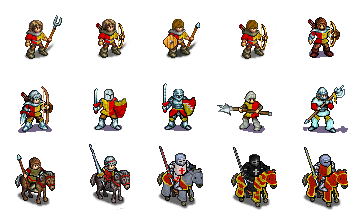 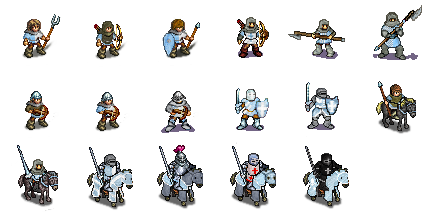 P.S. I don't know whym but he don't like them now. They are funny

Those are awesome! I wish I could make stuff like that.
Check out my new sprites!! http://forums.wesnoth.org/viewtopic.php?f=23&t=34347 ❤♪
And don't forget to look at my deviantart.
http://trubbol.deviantart.com/
Top

I'm just trying to realise what English Heavy Halberdiers (the second one) armor is made of.
Ey, BTW: It is theoretically possible to make custom faction having in fact TWO colors for their TC?
(Like, half of magenta range would be red colors, and half would be yellow ones etc.)
Just wondering.
Top

BTW: It is theoretically possible to make custom faction having in fact TWO colors for their TC?

AFAIK, this is not possible. What you could do, however, is use another palette destined to be recoloured by the engine. In the [unit_type]'s [modifications], you could insert an [object] containing a recoloring function [effect]. Note that I have never attempted this, so I'm not sure how you define palettes (do you just take the magenta one and its equivalents?), where they are defined in the code, and whether or not this could cause issues with some teams (for exemple, would red's units' magenta get turned red, then all the red (original and magenta) shifted to another palette?)

Or you could investigate this, although I have no further insight into it:

[unit_type] does not accept [modifications].

data/core/team-colors.cfg contains the mainline palette and color range definitions.
Author of the unofficial UtBS sequels Invasion from the Unknown and After the Storm (now available for Wesnoth 1.14.x and 1.15.4+).
Top

Ack, it's the single unit wml page that induced me into error! Well, I guess you'd have to proceed with a bunch of recruit, recall, advance et al events giving out objects...