Forum rules
Before posting critique in this forum, you must read the following thread:
Post Reply
36 posts

Any chance on doing a lavafall after this? The transition of the regular lava to the lava chasm transition right now doesn't look good, but recoloring this orange would work wonders. I'm just a humble mapper, but it would make an Underworld much prettier.

EDIT: Just checked in trunk. There's a bit of a lava drip in the lava chasm to plain chasm transition but not in the lava to lava chasm transition or lava to plain chasm. Still, nothing as good (or obvious) as this.
Aethaeryn (User Page)
Wiki Moderator (wiki)
Latin Translator [wiki=Latin Translation](wiki)[/wiki]
Maintainer of Thunderstone Era (wiki) and Aethaeryn's Maps [wiki=Aethaeryn's Maps](wiki)[/wiki]
Top

I'm not planning on lavafalls, but if you want one for something, you can probably make a reasonable hack using Gimp's Alpha to Logo: Glowing Hot filter. Use the level tool to reduce the input area to darken the dark parts and you can get something like this in a couple minutes from the files I posted earlier.

ancestral wrote:I still would like to see a waterfall spill into water…

I'd like to see this too, but I think my biggest question about it is "what would it be falling from/to?" afaik, it's not like there's a canyon water tile, nor with the wesnoth engine would it be easy to make one that made sense. Their is also not a higher water location.
So, doing a water-to-water fall would take significantly more than just the falls themselves it'd take sussing out an entire new way of doing those transitions and figuring out walkable-to-walkable cliffs in-game. There have been lots of attempts at this, at least one that was getting somewhere (the cliff transitions were in a tile rather than tile edges), but without something like that being in *first* trying to get water-to-water falls seems like a cart-before-horse effort.
Top

ancestral wrote:What does it look like having water spill into… water? (Most waterfalls I've seen don't spill into an abyss…)

that is a lava abyss with water instead of lava, basicaly the same liek the "star abyss" or several other abyss(es)

once the waterfalls are good, i can definatley inmagine to make a water abyss myself, you dont even need much work for it

its pretty easy to make
The best bet is your own, good Taste.
Top

so all you need to make water flow into water is to make a water chasm and the only gfx needed for this are some similiar to this:

ok, the lava and the volcanic abysss consist of 2 more tile (each), but only for diversity, all you need is a plain water hex, and the rest is done with wml and the existing abyss stuff

so not much work included, infact i would say this is the smallest problem
(ok, there may be some hassle with transitions, but i think someone can easily figure it out)
The best bet is your own, good Taste.
Top

let's focus on waterfall to abyss, please... deriving other types of waterfall would probably be way easier once we have something to copy ingame...
Fight key loggers: write some perl using vim
Top

ancestral wrote:I still would like to see a waterfall spill into water…

I'd like to see this too, but I think my biggest question about it is "what would it be falling from/to?" afaik, it's not like there's a canyon water tile, nor with the wesnoth engine would it be easy to make one that made sense. Their is also not a higher water location.

And that's exactly my point. I'm not really a fan of this since it just doesn't make sense to me.

5) Added more water to the right side so it appears to be falling right as well. I think it fills out the area nicely.

6) Completely redone. Wanted a fall instead of just a white line. Not really sure I succeeded. Consider this a very early draft. I know the edge around the horseshoe is too sharp, but what about the interior?

EDIT: I think I figured out what was bothering me about 6. Attached improved version.

But when that's done, I would love a set of lava falls. I have some dual-layer lava areas that currently look awkward.
Campaigns: Dead Water,
The Founding of Borstep,
Secrets of the Ancients,
and WML Guide
Top

7) The last one from before I started posting. Like 2, it's been changed to make the cliff edge more prominent on the right side. Because it overlaps with 2, 2 has also been changed slightly to prevent some artifacts where they overlap (2 not shown in this image).

9) An extension of 8 for when the cliff curves back north east.

10) This one seems too blurry to me. If someone has an idea on how to fix it, that would be great.

11) Not actually new, just the top part of 6 split off because the horseshoe part didn't fit here.

And a bonus: the Cliffs of Thoria reimagined. 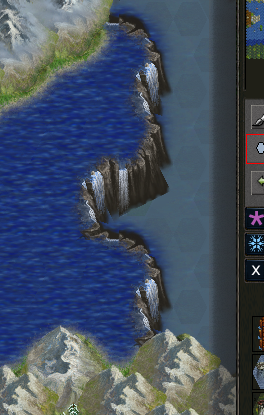 Yes, it's pretty rough. The misty chasm is just the fog terrain quickly copied, the deep water is bleeding into the chasm, the cliff edges have large chunks of black instead of fog on top and a waterfall transition is clearly missing. But it's fun, and, even like this, I think I prefer it to the current representation.
Top

As far as I can tell, I have 3-5 more base waterfall images to draw before the set is complete enough to be useful. I thought I would take a moment to test animating a waterfall and resolve some potential problems before I continue.

This is NOT final. At the very least, I have to continue the animation to the bottom of the fall and add a sense of spreading to the droplets at the bottom. This is just to see if I'm going in the right direction.

Second, the possible problems.
1. My file names are a mess. When this is done, I'm going to have created some 70+ pngs covering at least 14 animation sequences. I've attached the WML for the current falls at the end of this document and I would appreciate it if someone could send me back something containing a list of file name changes to make them more reasonable. Hopefully the maps for each one will help make it clear as to where each one goes. 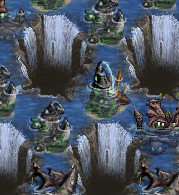 Once I am done, people will be able to create this. One waterfall is missing from the image but it's good enough for discussion. I remember reading someone posting that they got to 80% CPU usage with a map filled with windmills. Once all the water is animated on the above map, there will be 10 animations for the waterfalls in each chasm, 1 for the water, possibly some for the water waves at the cliff transitions (I hope not), 1 for the village flag and 1 for some of the villages. Almost all of the waterfall animations cover 4 tiles to fulfil image placement requirements. If any of the animations have different timings from each other, (and I think rhyging5 wanted 7 fps for the water while I am using 10 in the above example), then this could translate to huge numbers of updates of the entire screen each second (70 fps, each requiring some 20+ images to be drawn per tile). Can the engine handle this, or does there need to be a code change to go with this?

(For comparison with the windmills, it's about 3x the number of images required to draw per frame)

Comments on all of the above will be VERY useful.

as an (unrelated) comment, I will be away for some time, so don't expect much from me until the end of may...

as far as naming convention, my main requirement is that you have one... I have pretty good renaming tools I can use if I don't like your names, and I don't know what to recommand at this point

so as long as you respect a "strict" naming convention, whatever that convention is, we should be fine

as far as CPU is concerned, we'll have to assume people will do reasonable maps, I guess
Fight key loggers: write some perl using vim
Top

If the CPU gets too high, the player can always choose to turn off the map animations in the preferences. As far as I know, there has been little water/chasm maps created, mainly due to the poor transitions, I guess. Although that might change soon.

Alarantalara wrote:This is just to see if I'm going in the right direction.

It looks like the water's going down, so yeah, I'd say it's going in the right direction.

Nah, okay, kidding aside, this looks like it's going to be awesome. I know it's a WIP, but I thought I'd point out that there should be at least some changes in the width of the waterfall as it flows, because else it will look very stiff and unnatural.

This will really be a great addition to the game, great job thus far.

Sorry, i haven't commented before, i just noticed this thread...


Alarantalara wrote:As far as I can tell, I have 3-5 more base waterfall images to draw before the set is complete enough to be useful. I thought I would take a moment to test animating a waterfall and resolve some potential problems before I continue.

This is NOT final. At the very least, I have to continue the animation to the bottom of the fall and add a sense of spreading to the droplets at the bottom. This is just to see if I'm going in the right direction.

This isn't something that will necessarily need a bunch of frames. A steady, steep waterfall doesn't so much appear to move as "twinkle". You can't necessarily follow a bit of water down.

Though more to the point, i wouldn't worry about animating these until they are complete. I would not consider lack of animation in itself a reason to not add these to mainline. Animation can be added later, once it's certain that the basic framework is sound-- and it's easier to tweak and adjust things when you don't have to worry about animated frames.

Alarantalara wrote:2. Am I going to kill the game?

Probably not. A screen full of animated water adds 25% to one of my 2Ghz cores, vs a viewing part of the map without water. There's no noticeable effect on game performance. At the very least very little of the fault will be yours-- animated water will generally be much more common than animated waterfalls.


I'd like to see your current .PNGs even if you aren't finished-- i may be able to save you some trouble, since i've found a lot of things to avoid the hard way.

Looking at the files you posted on the first page, you've made at least one tactical error. Just before the lip of the waterfall you have a chunk of water that's mostly fully opaque. There's no reason these waterfalls can't work with all water and probably swamp tiles. You just need to leave the part before the edge mostly transparent, painting on your highlights semi-transparently, so that the same images can work for everything.
Feel free to PM me if you start a new terrain oriented thread. It's easy for me to miss them among all the other art threads.
-> What i might be working on
Attempting Lucidity
Top
Post Reply
36 posts