I just published the campaign The Underdog on the Wesnoth Add-on server (1.14).

This is supposed to be its forum thread.

All of my (three whole) custom units (frankensteined of course).

The scenarios are mostly finished. - suggestions/critique/ideas are welcome (of course).

This campaign is about inner strength and learning to accept losses. (In wesnoth combat not in real life.) - At least this is supposed to be.
It stars an orcish assassin, Prot and his ragtag band of orcish refugees (or something like that).

The campaign is yet to be balanced (but it should be fine on Medium difficulty) -> General difficulty is Intermediate.

If you have anything to comment about the campaign feel free to do it here (feedback article for this campaign doesn't exist right now).

Have fun!&Thanks for playing!
Designer of the campaign: The Underdog
Top

Intro text, first scenario
'He lacked strenght, but...and as time passed he bacame an assasin...' -> strength, became
'A approximately a week...with an other tribe.' -> Approximately..., another/some other
'Even for his surprise, he was...succesful...keen of Thud's rule.' -> Surprinsing even him/To his surprise...successful...on/of being under

The description of armswield is somewhat...clumsy/awkward. I can understand it, but it doesn't look like it's meant to be understood. xD

While the XP is blue, there was no advancement listed in the unit description (Orcish Worker), so I just tried to advance the unit. (You renamed the lvl 2 unit to 'Orcish Headsman', but didn't change it in the 'advance to' for the lvl 1 unit.) 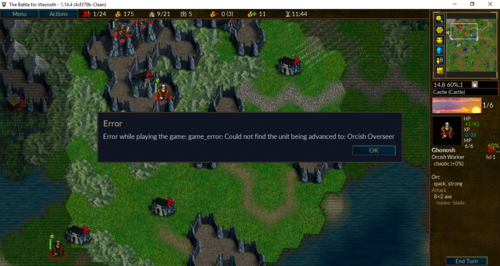 Thanks. I was in a hurry when I changed the names of the unit (and then I forgot about it

How is the armswield ability's description not meant to be understood?
(I corrected the grammatical mistakes and fixed the problem with the headsman - I made a small update.

)
Designer of the campaign: The Underdog
Top

Adjacent own units of level 2 and 3 will do more damage in battle. When a unit adjacent to, of level 2 or 3 and on the same side as a unit with Armswield engages in combat, its attacks do 25% more damage.

The armswield ability of this unit enables adjacent units of the same side to deal more damage in combat, though this only applies to units of level 2 and 3.

Both versions are messy. Reading them is like getting constantly tripped up while walking. ._.
UMC Replay Forum
List of all add-ons and (sort of) their status
Mainline campaign feedback
Top

Now I see it too (ouch). I will definitely change it.
Designer of the campaign: The Underdog
Top

Buzzards
(Mind you, I don't know if my corrections are right for sure, those things just felt wrong to me.)
'Still, losses were taken by the other side either.' -> 'as well' or maybe change the sentence to 'their side was not without losses either'
'Prot was desperate, for he thought that most of the goblins will run away' -> 'would'
'among the goblinfolk and that they are willing to fight for him.' -> 'were'
'knew how much commotion this battle caused' -> 'much of a commotion this battle had caused'
...err...can I just ask you to look over everything you wrote and check if you used a tense consistently? It doesn't feel like you did.

Bested but not Broken (Yeah, I'm cheating. Don't worry, I will play it for real at some point. xD)
'They arrived at Melmog with almost before the wolf-raiders wanted to strike down.'
Not only is this not really intelligble, that sentence is there twice (with some variation).
Last edited by Konrad2 on February 4th, 2019, 10:18 am, edited 2 times in total.
UMC Replay Forum
List of all add-ons and (sort of) their status
Mainline campaign feedback
Top

Buzzards
are to held them up -> hold

There is no 'explanation' or celebration when you kill Poar. And I actually do still stand to my question: Why Poar? Why not just any of them? The story doesn't single him out, that's for sure.

EDIT:
Editing instead of another new post as the author seems to haven't been active in a while.

Vegor and Grisk have no traits at all. (It's 'normal' for Grisk as a hero unit, but not so much for Vegor as a 'normal' loyal unit.)

EDIT 2:
The Three Dragons
Looky everyone. -> Look out everyone.

EDIT 3:
The Three Dragons
The Troll ambush was...anticlimatic. One of it's problems: you can move past it without triggering it. (You probably coded it to trigger when I end my move on some specific hexes, not when I move over them, which can lead to not triggering it if your units move fast enough.)
The other problem is, neither side mentions me at all, despite me standing in the middle of them. I don't even understand why I'm enemies with those orcs.

(The explanation felt 'late'.)
My suggestions regarding this: Make the ambush trigger when you are further away, or make their dialog depend on how close you are when you trigger it.
Last edited by Konrad2 on March 23rd, 2019, 12:19 am, edited 1 time in total.
UMC Replay Forum
List of all add-ons and (sort of) their status
Mainline campaign feedback
Top

Assassination
15 turns is very generous on hard, because the army of the victim gets destroyed in 6 turns (at least in my case (maybe +-1 turn?)) by the wolves.

EDIT:
The Hunt
Let none alive. -> Leave none alive.
You need to put in some precautions so I can't ambush the incoming leader. I just send some units there to kill him the turn he arrived.

EDIT 2:
Bested but not Broken
It's odd how the wolf riders (who are goblins) are surprised at being defeated by 'goblins'.

The Dead Hand
He just simply -> He simply


It's odd that Karun has just 'Karun' as name instead of 'Karun Black-Eye'.

EDIT 3:
The Dead Hand
Karun says in turn 2, that he will take command of the forces in the city. So why is Prot the one commanding them?
And why are you using a different map for Barag Gor than mainline? (The differences are rather drastic, so it's probably not explainable by 'some years later'.)
I haven't expected -> I hadn't expected
It would be cool if all surviving city forces would turn against me after I defeat the goon. That way the Karuns 'let's finished what we started' would make
more sense. Or change Karuns line?

The Grand Army
How does it make sense that Prot has all villages while Karun has none? It's Karuns city, not Prots.

EDIT 4:
I'll reupload my replays (including the 10th and last scenario) soon in the UMC replay forum and add here a link to it.

EDIT 5:
You refer to Karun as 'Black-Eye Karun', but in mainline he is called 'Karun Black-Eye'.
(I'll make a new post once I've created the replay topics.)
UMC Replay Forum
List of all add-ons and (sort of) their status
Mainline campaign feedback
Top

This is the link to the topic with the replay for the first scenario. It includes a link to the next topic.
UMC Replay Forum
List of all add-ons and (sort of) their status
Mainline campaign feedback
Top