Hi everyone! This time I will continue to translate igorbat's "Dirty strategies" first published in Russian on the Wesnothlife forums -- this time I publish a translation of an illustrated article. This piece will be dedicated to a single important topic: Loyalist horse rush.

Hi everyone, I'm continuing my article series about dirty strategies, i.e. non optimal ones that can give you a starting advantage or even a victory with little luck or if opponents are not prepared. This time it's a classical horse rush: 2 cavalrymen and 1 horse with a lance, others by your choice, with killing a scout and possible taking of opponent's village on Player1Turn3. 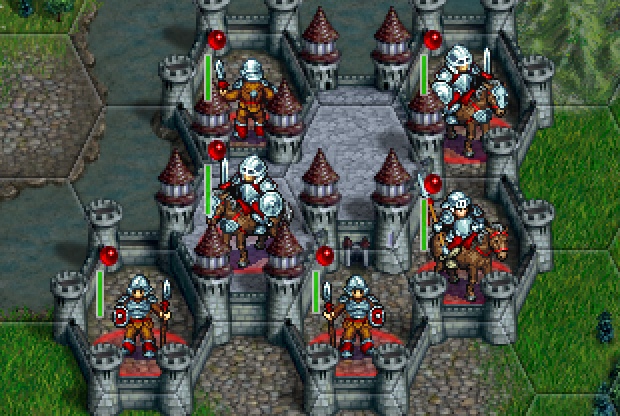 The key idea of this recruiting is the fact that units bought on cavalrymen's diagonal need to traverse 16 hexes to capture enemy's village. Putting it simply, if you buy cavs this way, they will reach. By the way, if you play on the "ladder version" of the map, your farthest village to the right can be taken by a 5 mp leader as well. That's cool how they rebalanced the map in advantage of cavalry rush, do you agree?))) 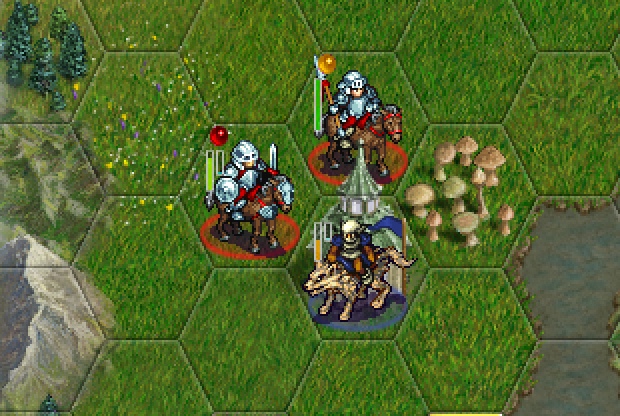 The opponent exposed a wolf, now we'll overrun him. 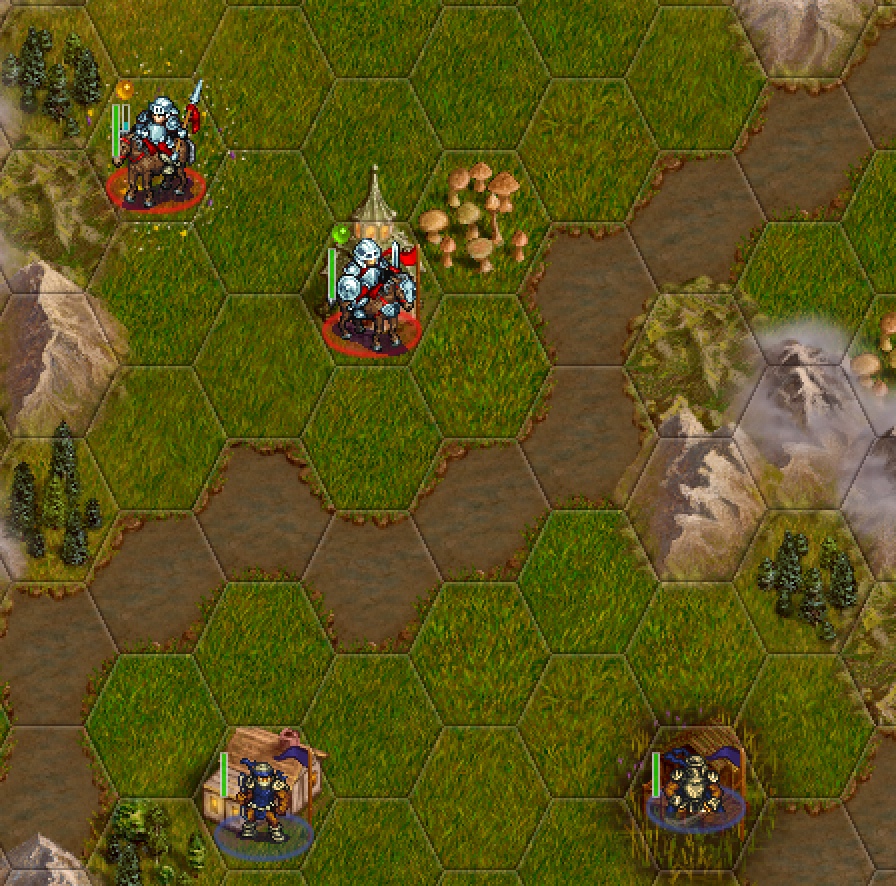 The 4th turn, that's how our troops look like: do not let encircle our horses + break opp's possibility of a night rush against us: we have taken the village!

Conclusions:
In the process we lose a bit of gold because we take some villages only on the 4th turn. But cancelling a night rush, borrowing enemy village and killing enemy scout return these sacrifices.

On the Caves of the Basilisk 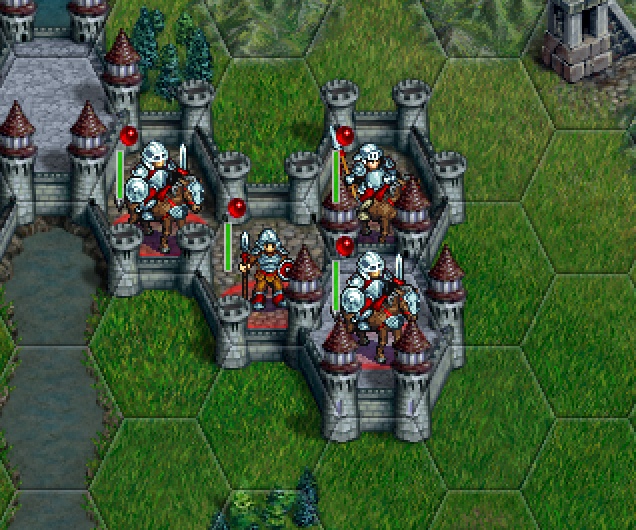 No 9 mp horses, okay, it will work anyway. 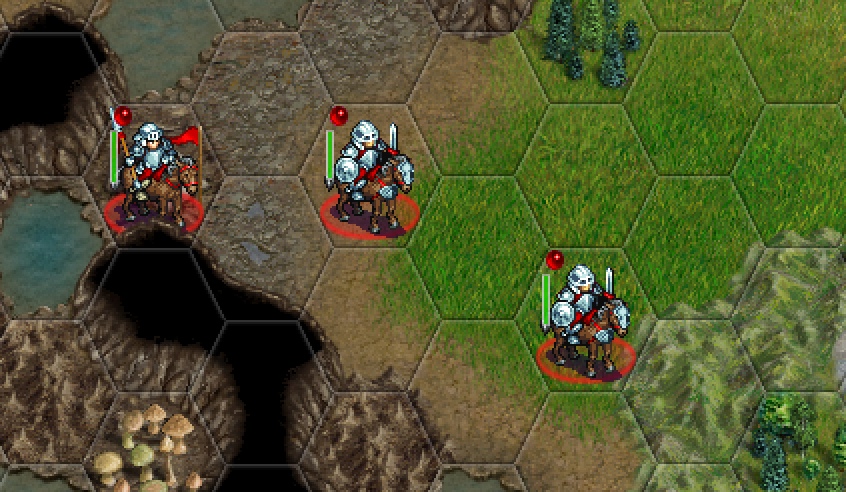 The horseman from the village reaches the enemy village. 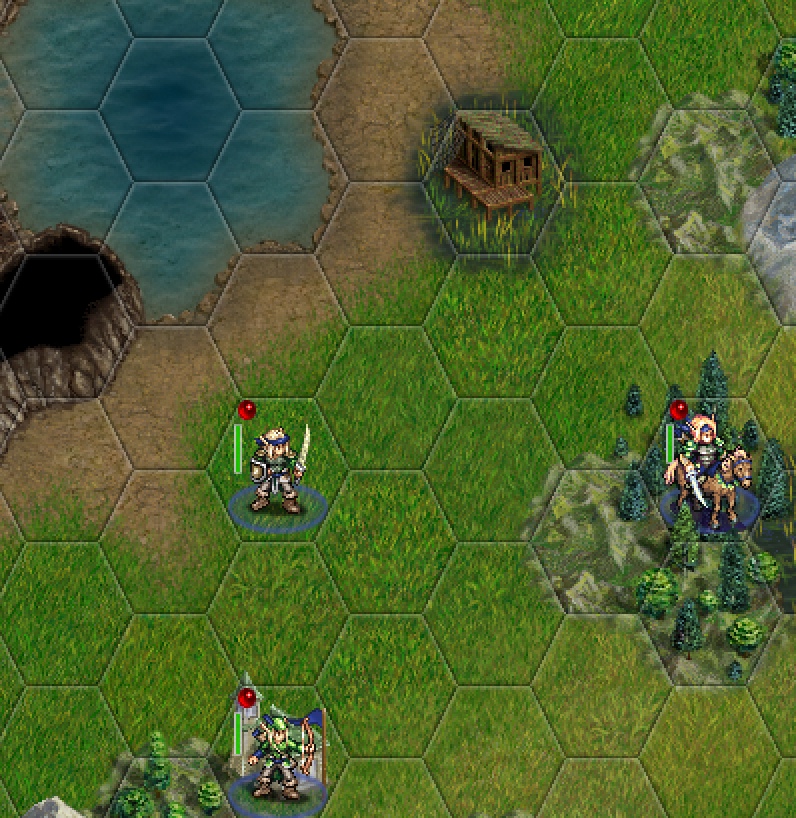 The elf has decided not to take the village, to save his horse-scout. 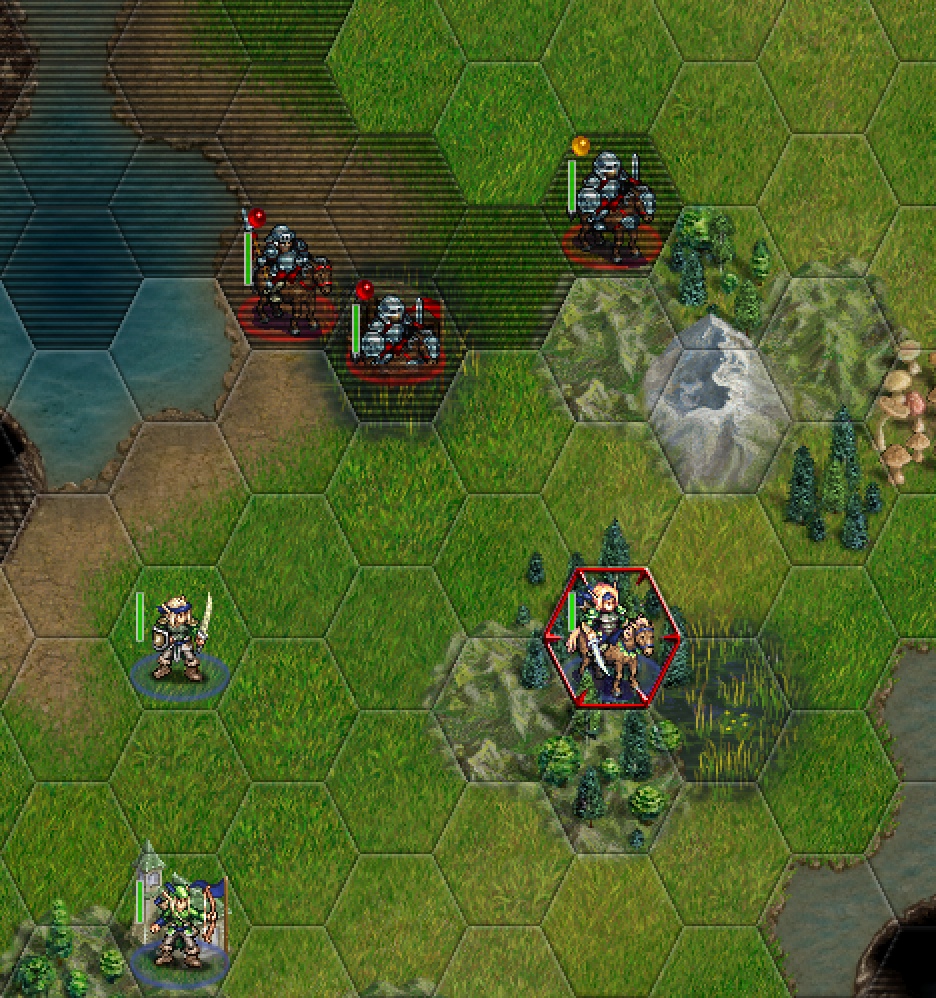 An example of positioning: elfs can't take the hill, moves of the scout highlighted -- no way to block, so the loyalist can either stay more or just retreat giving up no units on retreating.

What to do next?
Absolutely depends on the match-up. Most likely, to prepare somehow defend on the other side, or maybe prepare harassing further -- fencers/horses with lances/mages for knocking out -- in order not to give the enemy even a hypothetical chance to equalize the game.

How can I fend off?
0) begin your 2nd turn with a scout on the side where such a rush is possible: you understand where rush, take our main villages poorly but squeeze Loyalist well.
1) don't take the vil with a scout
2) prepare to squeeze horses / be able to fight them off -- recruiting 3 units or hard-to-kill units (bone bows, bones). Important that player1Turn4 is usually a dusk, Loyalist can still deal horrible amount of damage, so it may make sense to let Loyalist retreat at dusk without squeezing him.

In general, if Loyalist goes back at dusk, it's fairly possible the situation is played to your slight advantage: Loyalist has recruited units by 57 gold, they took 2 villages in 3 persons for their 2 turns. Remaining villages taken late, income lost not only by you but by Loyalist as well.

Faction features:
Dwarf: a gryphon in the village can be cut, even a strong resilient one, but you need to calculate here: do 2/3 hits of a cavalryman + 1 hit of a trololohorseman kill your gryph? If no, you can take it but it's dangerous. If yes, then surely don't take. The danger is that a horseman can attack just after two cavalrymen, in that case 1 hit will surely be enough damage, and a gryphon costs too much for your economy to lose it this way.

Orc: Orc has difficulties to fend off -- archers and goblins needed but they oftern require +2 turns to reach the battlefield, and Loyalist in this case can retreat even in his first night, which can't satisfy Orc -- because an early rush will be disrupted by this horse run. More to this, an archer probably has to be placed in the village because on flat horses easily overrun him and it might be very painful, if not possible because of zones of control, to kill those horses.

Elf: An archer recruited on the 2nd turn can help with knocking a horse out. But if you waste moves of 4 units (scout + 2 fighters + archer) on just beating a cavalryman in your village and stand on flat after this, then consequence might be very unfortunate: your archer is charged and you left with a nakes force, just melee, against Loyalist's melee (while Loyalist has both speed and resists).

Undead: If you took a starting ghost, you might have big problems -- during the day horses can kill the ghost but you notice them only after taking the village. For knocking out/fighting back you need bone archers, but they would reach not so soon, and Loyalist just retreats, but he surely retreats -- you need only 2 bows.

Drake: better not to take the village -- fast clashers will perfectly cut cavalrymen on the second day. Even if a horseman (large retaliation) is left in the village, I'd cut him anyway: even if clashers are weak and the horseman is beefy, horses have a bad time to hit clashers, especially considering their first strike.

Important:
Unlike the previous one, this strategy doesn't work at all on the second slot -- the opponent makes his third turn earlier, changing a scout in the village with an infantry, and it's very painful to bump into him + probability to hit is not 50-60% but 40%, so you can even miss two times + the opponent can reach with his leader in time with +1 unit, so you can be squeezed.
Co-founder and current maintainer of IsarFoundation, Afterlife Rated and overall Wesnoth Autohost Project
Top
Post Reply
1 post • Page 1 of 1