If you have a Faction or an era that you believe needs to be added in, or want criticisms in works that they have yet to publish, this is the thread. Throw up proposals for factions, eras, races, units, traits, special abilities, new damage and resistance types, effects of your add-on here. Be sure to try to balance them before hand and avoid overwhelming defense or damage traits. 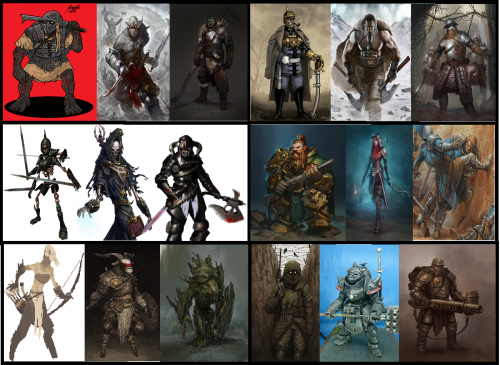 Art not by me, I have no skill. Hopefully none of this is copy righted

Factions and races from different worlds pouring forth voluntarily to invade this one. Not wesnoth or any fan-made era. Not sure if viable or non-violating of copyright but its not like I expect anyone would actually make it.


Ghazabor Horde
Collection of Orcish tribes from different worlds that have united in the name of conquest for resources and lands to sustain their people. The more they conquer the more they reproduce, leading to more demand. Every failed conquest leads to massive destabilization and infighting. Brown, Grey, and Green orcs have different strengths and weaknesses. Overall, melee focused and numerous but few in the way of special abilities or effects. Brown are fast but mostly frail, Grey are strong but slow, green are versatile but lack specialization.


Faustian Reich
Polytheistic human supremacist empire spanning multiple cultures and worlds with varying technology and skillset between their troops. The original members originate from a world of unceasing terror and conflict, they see themselves as heroes in their world due to sheer comparison with their opposition. They enact conquest and tyranny to gather resources and manpower for the purpose of fueling their wars against eldritch horrors from beyond reality and the various cultists and monsters dedicated to mindless destruction. Large and versatile unit roster consisting of almost entirely of humans with sparse dogman and dwarven auxiliaries. You cannot beat the enemy in their own game. They also lack units that can cross chasms and deep water.


Immortal Legion
A vast army of undead abominations who seek to extinguish all life in service to the Master of Darkness. Constructs are not animated by the souls of the dead but by magical intelligence crafted by the necrotects of the Legion. The constructs themselves range from immediately reanimated corpses to carefully augmented and remolded amalgamations of flesh and bone redesigned by dark powers to fit the roles of them. Swarm of cheap cannon fodder supported by frightening specialists.


Andertian Confederacy
An alliance of multiple races who seek to stabilize other worlds in order to bring forth a golden age for everyone. Optimistic, ambitious, and naive. Consists of strong and sturdy dwarves with their runes and tech (neutral), the swift and cunning lunar elves and their affinity for nature and night (chaotic, but not evil), and the versatile and valorous humans and their knights and priests of Light (lawful, but as you can see not often bright). Units are strong in their field but are vulnerable when caught in areas outside of their craft.


United Tribes
A large and populous nation of various beastmen ranging from dogs to goats and eagles who seek to halt the advancement of 'civilized' works from theother races in order to preserve the natural world. They range from chaotic to neutral, but are often fearless and have access to living constructs of wood and stone to aid them as well as plentiful underhanded tactics to compliment brute force. For the most part they rely on terrain and stealth for staying power, they have few durable/strong units outside of higher levels but are cheap and have support.


Zethanian Alliance
An alliance of technologically advanced nations who banded together in order to fend off an even greater foe. They seek to aquire resources, technology, and allies who can aid them in their plight and hopefully stop their enemies from spreading. Defence and ranged oriented faction whose costly units favor digging in and bracing against their foes. Vehicles and mechs are strong but expensive to purchase and upkeep. Completely lacking in defence against arcane damage with no magical attacks or effects of their own whatsoever.
Top

Why would people use this thread instead of making their own in correct forum section?
Justice is what happens when someone with a sword kills someone without a sword.

Ravana wrote: ↑July 29th, 2019, 3:05 pm Why would people use this thread instead of making their own in correct forum section?

Threads for add-ons already in the game such as 'Ageless Era' and 'Era of Magic' have their own dedicated threads. This thread is primarily for era and faction ideas that have yet to be worked on and submitted, primarily to give constructive feedback and help people who are unsure about their own works. It would be annoying to see a thread of a faction or era you made, plan to make, or desire to see just get pushed back due to the creation of new ones. I acknoledge that the same threat of having your proposals overlooked will still exist here but I'll still try to give attention to them. If this thread won't work, it'll be overlooked and forgotten so there's no harm in it right?
Top
Post Reply
3 posts • Page 1 of 1