Forum rules
Before posting a new idea, you must read the following:
Post Reply
1 post • Page 1 of 1

Just posting to share a patch that I've been using for a while. It changes the tooltip on the HP, like this: 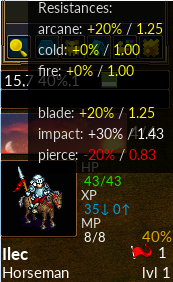 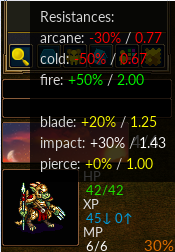 There are two differences here to regular wesnoth. 1) The damage types are grouped by physical/non-physical, normal Wesnoth sorts them alphabetically in your language. 2) Instead of just showing the resistance as a percentage, it also shows how many more/fewer hits you would need to receive to incur a given amount of HP loss, relative to how many hits it would have needed if you'd had 0% resistance. For example, a Red Mage would inflict 8HP upon an orc in one hit and would inflict the same amount of HP upon a Drake Clasher in two hits, so it says "2.00" next to "+50%".

I don't plan to mainline these changes because I don't think they'll be popular, but anyone wants the patches for either of these changes, let me know and I'll split them from my local branch and post them.
Top
Post Reply
1 post • Page 1 of 1