Forum rules
Before posting critique in this forum, you must read the following thread:
Post Reply
45 posts

Hi everybody, I'm a newcomer in Wesnoth community, and had the will to contribute for a long time!
So do I with this (not completed yet) portrait of a skeletal archer.
I just wanted to make him look dumb and a bit dislocated.
I'm waiting for your feedback, please don't be gentle 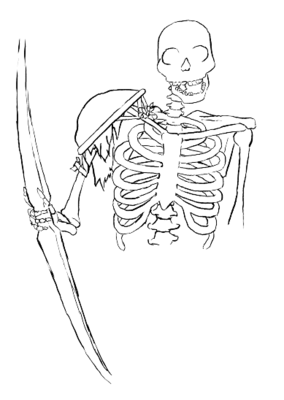 Not bad.
His head might be just a tad small, but otherwise, not bad.

looks like a nice start for the skeleton archer! not much to say at this stage, basically full frontal views are a bit boring, but will get in nevertheless if done well. apart from that, the collar bones look a bit too massive and the forehead too low. but i like how much attitude you give him with that dislocated jaw!
and if you want to give him a bit more detail you could add the quiver or several more remainders of his armour and cloth.

i look forward to see how you'll shade him!
Top

Great work! I love those armbones. Though, I'm not sure about the shoulder-pad tied onto the collarbone. Up to you, though

I believe that Boucman usually gives this little forum-intro speech, but he hasn't posted here yet, so I might as well.
People whose names are in light blue (Like thespaceinvader and Girgistian) are art contributors--People who have shown artistic talent. If one of them gives you critique, you can be confident that they know what they're talking about--That said, it's up to you whether or not you follow the advice. It's your picture

People whose names are in olive-green are art directors--The only two I know of are Jetryl and Kitty. If one of them critiques your work, you can be sure that they know what they're talking about, and if you want your piece to get committed, you probably have to follow said advice.
People whose names are in green (Like Thrawn and Irrevenant) are forum moderators. They don't necessarily know much about art, but if they say something in green, it's something relating to forum usage that should be listened to.
People whose names are in red (Like Sapient and Boucman) are coders. Not really sure how that relates to their status in the art forums, but I believe that most/all of them have commit access--That is, say on what goes into the game.
People whose names are in black (Like yours truly) probably don't know a damn thing about anything, and anything they say should be taken with a large grain of salt

Many folks have a title under their names, too, saying what they are--Most are self explanatory ("art contributor", "developer") but there are people with special titles, too, like Turin (His is "lord of the east"). Not sure what the significance of that is.
Anyway, welcome to the forums! Don't worry about your English, it's great--You're more understandable than many native speakers on here

Edit:
Forgot to mention because you don't see them around here too often, but people whose names are in pink (Like Viliam) are translators. Self explanatory.
Top

Welcome aboard I guess, despite the fact I just got on too!

As to the art, I like the general design, perhaps a few perspective size tweaks as above mentioned, but its not noticeable at first glance, so you're definitely headed in the right direction.
The Rauthar: era + campaign in development
http://www.wesnoth.org/forum/viewtopic.php?f=19&t=28424
Top

Hello, thank you all for the replies and comments.

I made some corrections on the skeleton archer :
- thank to TrashMan, the head is now of decent size, and a bit repositioned on the left.
- I also followed the advices from kitty and gave some bone material from the left clavicle to the skull bone (yep, surgically amazing)
- The bow is now in the correct hand!!!

Then drafted some new details :
- the quiver will be in the skeleton's back, attached to his backbone or hips, I don't know yet.
- the right hand should carry an arrow, but I still haven't found a nice composition of the whole character

And not drawn yet, some armor parts on the hips, skeletal art on the bow and the shoulder armor. 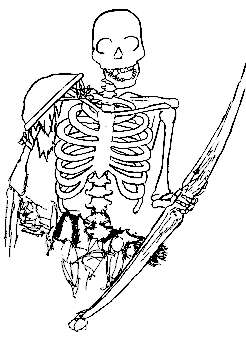 @kitty : Thanks for your nice comment!
On shading, I've actually never had done seriously this part on any of my work, except I-draw-what-I-see sketches. So I'm currently training to apply light and dark as well as colors.
At this time, I'm struggling on a more friendly shape : Pac-Man skull bone!
There I am :

It's fairly difficult to choose colors that can be recognized as "bone", and since it's my very first shading and coloring I truly need some advice!

Thank you all again!
Kao
Top

that bone pacman is great! i recognized him immediately!

regarding shading bone, be daring! you can take a whole lot of greyish and yellow-ish colours as a base and add reflected colours from around ontop. if the pacmans are meant as a shading exercise you still have a few things to learn - think about it as a simple sphere. i guess your lightsource is somewhere left-top.

(i only found spheres with top-right light as a quick and simplified example, but i trust you can imagine it the other way round!)

- decide upon the direction of your lightsource.
- then determine your form shadow, which will speak largely about the direction of your lightsource. determine your cast shadow.
- choose appropriate flat values for each of these areas: full light, shadow-side of the sphere, cast shadow, and background.
- add ambient light into the shadow side of the sphere.
- depending on the surface quality of your sphere the highlight may be rather intense and concentrated or perhaps dull and spread out.

of course you don't have to think that hard about every single sphere - but it's good to keep those factors in mind!
and if you are not sure - just get some ref! ref-using is not cheating - it is smart and necessary.

otherwise the skeleton sketch still looks nice - watch out the quiver gets confusing with the arm.
Top

Got bored trying to get dynamism, slipped view angle to the left and redrafted from scratch: 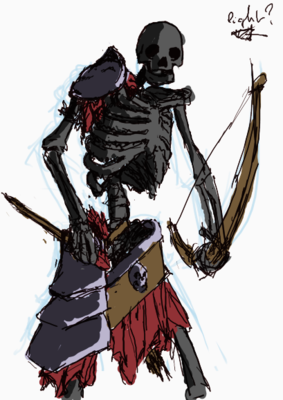 fixed arm gigantism and miniature head, definitely have a problem with small heads

I personally prefer this one, but I may have exaggerated arms and hands perspective quite a lot. Is it bothering?
UPDATED : fixed arm, was really too big
Also put light source and base colors on.

Furthermore, I'm still training on light and colors, and I am quite bad at this

This might help with avoiding small heads: http://www.portrait-artist.org/misc/proportion.html
Top

Just a quick comment from a newb, so take it with a chunk of salt.
The arrow in his hand seems kinda thick and short. The pose is definitely an improvement from the first, but one thing I miss was the jaw. It made it look like a mindless, well, zombie, and this one seems a too focused for that.
Top

I like your second attempt much more. And if I may so, it's pretty dynamic in my eyes.

What I wanted to ask - if allowed: Why did you try to make the skeleton look "dumb" in the first place? As far as I can see, especially thanks to Kitty's works, the game becomes much more "realistic" in some kind of way, more mature, more adult - whatever...

Personally I would prefer the Undead stick to this development and give them a more creepy, dark kind of aura. Even if skeleton warriors and archers are not very bright in terms of intelligence, they are some kind of dangerous opponents. Imagine to encounter non-living creatures...

As I stated someplace else, I think Wesnoth could do with a bit more darkness. Where would this fit better as with the Undead?

However, these are personal opinions only.
I am no member of the development team and they may have a different approach.
ThanatoNoth | Necromanteion | Undead Rights Protection Society
"The gods can demand nothing of me. Even gods answer to me, eventually. [...] I cannot be bidden, I cannot be forced. I will do only that which I know to be right." (Death in Pratchett's "Mort")
Top

@ pharo212 : I've reshaped the jaw, so I hope my next attempt will fit more the original attitude, noticed the arrow, I'll fix that too

@ Thanatos : "dumb" may be not what I really tried to tell about, as pharo212 said, brainless or mindless would probably fit more.
As I imagine undeads, especially skeletal ones, they look pretty pathetic when not screaming and charging at you, mainly because they have no muscles, no flesh and approximatively nothing that living people use in body or facial expressions, so they are just like puppets. Moreover, the lack of flesh and muscles forces them to attach their equipment to... what they can! So in the end, they really look like the animated stack of bones they are, and this is my very purpose.
But don't worry, I love them rotten too, may you have a look at my current work : this is the incomplete line art, but some creepy details show up. 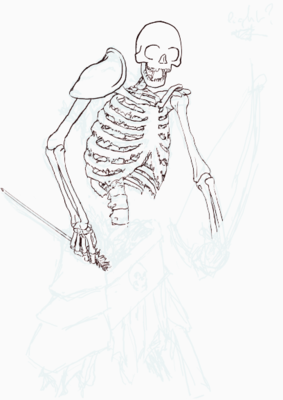 Not complete yet, to be updated.

Head and chest have been redrawn with ref this time, looks anatomically OK, please tell me if there's something odd.

If you're going for the creepy skeleton (I, too, am in favor of it, by the way), try changing the shape of the eye sockets just a little bit--Closing them down a little bit towards the nose.
Anyway, good work! I look forward to seeing where you take this.
Top

As noted already by yourself, the skeletons are often just an assembled stack of bones, and as such, they tend to look like puppets.

By the same token, you have attached everything rather anatomically correct (which is fine), but you can add a bit of detail by having a bone missing here or there, or possibly bones broken or damaged (violent deaths). If the skeleton lacks the musculature to move his bones anyway and is animated by dark magic, a missing bit of bone in a spot would not stop the skeleton from functioning.
Mainline Maintainer: AOI, DM, NR, TB and THoT.
UMC Maintainer: Forward They Cried, A Few Logs, A Few More Logs, Start of the War, and Battle Against Time
Top

Your in-progress lineart looks fine and I like the pose. Anatomy of the skeleton is accurate, which makes a lot for your drawing.
Nevertheless, I'm still bothered by the head : while the "facial" features are ok, the back of the skull looks a little small.

Also, I really like the way armour and cloth are hanging directy from the bones. Do not hesitate to increase this "repaired" aspect, for instance by adding straps of leather that tie armour directly to the bone (I'm thinking of the pauldron, for instance).

Keep up the good work !
Want to see more of my art ? Visit my portfolio !
Top
Post Reply
45 posts