As some one who has worked with tiles and paving, I can inform you that the joint color is dependent on the grout/sand color, and is some what arbitrary. In your pictures the "gap" is the same, but only noticeable on the fist one as the gaps in the second pic are filled with a grout of the same color as the tiles.
As for the irregularities, that normally comes down to the skill, speed, and perfectionism of the person laying them.
Top

I talso comes down the the skill, speed and methods of the tiles' manufacture. Modern tiles and bricks can easily be made in perfect, shiny rectangles. Older ones are more likely to have irregularities and changes in colour and form.
http://thespaceinvader.co.uk | http://thespaceinvader.deviantart.com
Back to work. Current projects: Catching up on commits. Picking Meridia back up. Sprite animations, many and varied.
Top

This will be going slightly off-topic, but there were many civilizations (Egyptians for one, but some in Mesoamerica too, I think) who learned to craft really regular and tightly-fitting stone slabs, so I wouldn't exactly say that industrial era is a prerequisite...
ride on shooting star
Top

LordBob wrote:..I cannot speak for Eleazar but if he didn't say something is right and tried to explain why and how it isn't, then you can most likely assume assume that it indeed isn't.

Well, that wasn't my take on it. Enough on that though.

I don't see what other take on it there could be. LordBob is right. If i was just expressing a personal preference that wasn't necessary to make the terrain commit-worthy, i would make it obvious, like the next paragraph.-->


Re: width of joints:
I'm not greatly concerned about it. A little thinner might be better, but i'll leave that up to the artist.

LordBob wrote:Which is why, even with a pattern, small recurring itrregularities might feel better than smooth perfection

I'm not seeing it, but I accept that better artists than me feel that way. I think the whole issue would go away with variants, but I don't have them.

I'll try to be clearer.
Any tile that contains only identical repeated elements is unacceptable for mainline. There needs to be variety within each tile. It doesn't have to be as wonky as the dark cave flagstones, but it does have to be noticeable. The second picture doofus links to is approximately the minimum of acceptable variation.

I grant that some ancient civs could construct things with great precision, (though in most cases hand-made stuff would have looked hand-made) but that's not the main point. It just looks fake and boring to have a tile full of identical stone slabs-- or whatever.
Feel free to PM me if you start a new terrain oriented thread. It's easy for me to miss them among all the other art threads.
-> What i might be working on
Attempting Lucidity
Top

I wasn't trying to somehow overrule you on this. I get the message. Thanks.
BfW 1.12 supported, but active development only for BfW 1.13/1.14: Bad Moon Rising | Trinity | Archaic Era |
| Abandoned: Tales of the Setting Sun
GitHub link for these projects
Top

Could you attach files for your most recent version? It was close to being a base for something I was planning to do eventually...
ride on shooting star
Top

em3 wrote:Could you attach files for your most recent version? It was close to being a base for something I was planning to do eventually...

If you put the light and dark tiles as different terrains and on different layers in the terrain-graphics WML, you can get a sort of mosaic. It might have worked better with one of them as an overlay though, I didn't get too far with it.
BfW 1.12 supported, but active development only for BfW 1.13/1.14: Bad Moon Rising | Trinity | Archaic Era |
| Abandoned: Tales of the Setting Sun
GitHub link for these projects
Top

Back to the "troll encampment" (needs a better name):

It's not ready for prime-time, some transitions still need work. The "keep" overlays (analogous to the tent in the human encampment) also need work, I'm open to suggestions for that.[1]

It doesn't interact with the animated water, but I don't think it looks horrible because of that. The sunken human ruin castle doesn't interact either. If it is a big issue, then we have a problem.

[1] This was discussed a bit earlier, for the dry-land version, but not for the water version. I'm not making this a 2-level castle, not just because I'm lazy, but because as someone who has written campaign scenarios, I found I was forced to use the human encampment too often. A 2-level troll castle would be nice, but it would be a different thing - just like the human castles and encampments are different things. 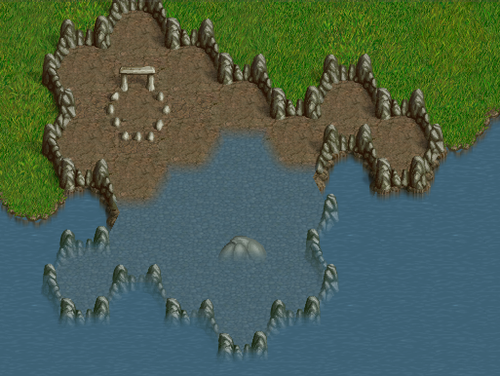 Agh, as I believe you yourself said in an earlier post, that tiny stone circle has shades of Spinal Tap about it. Personally I'd rather see three trilithons at 12 o'clock, 4 o'clock and 8 o'clock and mostly or entirely ditch the Dinky Stones.

OTOH, the Dinky Stones would make pretty good milestones or boundary markers; can you split them out for use as such? Similarly, the taller stone pillars would be handy, and so would the slab, especially if it can be made in a 'lying flat on the ground' version.

The stone circle is good, but it just doesn't seem to match the outside. It's made of different stone, and it's more refined in its construction and architecture. It fits, but not with that particular castle, IMO.
http://thespaceinvader.co.uk | http://thespaceinvader.deviantart.com
Back to work. Current projects: Catching up on commits. Picking Meridia back up. Sprite animations, many and varied.
Top

The... structure... in the water looks weird to me. I'm not sure what it's supposed to be or how it's supposed to be standing. Assuming it's meant to be stones, they're also a different colour from the walls and less craggy.
Age of Trials MP Era - Map pack
Top

Here is a version with a bigger stone structure. The swamp version has no extra art, it is just WML difference. The water version has some problems in that it only works with "dirty" shallow water, not the "bright" shallow water or the deep waters. Sunken ruin castle has the same problem, but at least it has sharp edged walls, so it is not as noticeable. 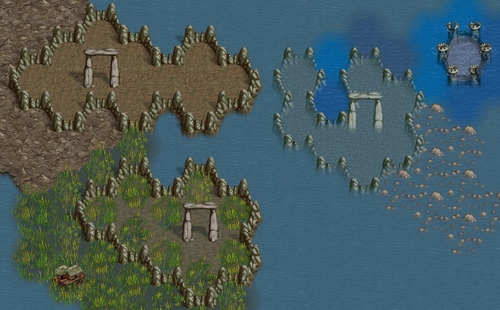 Simons Mith wrote:Similarly, the taller stone pillars would be handy, and so would the slab, especially if it can be made in a 'lying flat on the ground' version.
[I'm not misremembering who made those items originally, am I?] 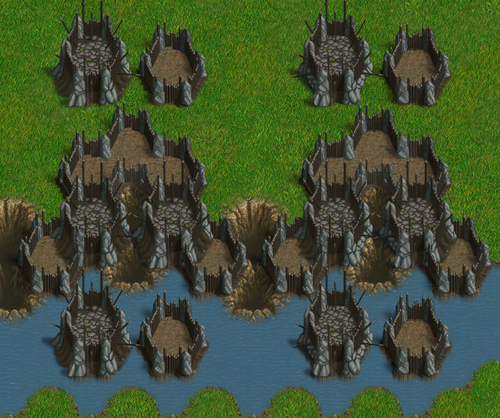 doofus-01 wrote:I fixed a few small things in the orcish castles. If anyone with the power thinks it is worth updating, here it is. 1.9.1 version is on the left, new version on the right.

Commited
Feel free to PM me if you start a new terrain oriented thread. It's easy for me to miss them among all the other art threads.
-> What i might be working on
Attempting Lucidity
Top
Post Reply
848 posts