I do think codpieces and pantaloons look good. Not 'good' in a way that I'd want to wear them, but in a way that they fit well with the late medieval Western European style that the loyalists are already modelled after.

Fashion sense is highly relative, subject to change and if you're older than 25, chances are that you've happily worn something that you'd consider completely ridiculous today. People around the world routinely wear things that we westerners think look silly, and they probably think the same about our styles. If you are creating a fictional culture that is different from your own, it is practically given that its fashion includes something that is laughabale, impractical or obscene by your own standards. If not, you're not using enough imagination.

But here's more complete version of the new duelist. The doublet is modelled after actual fencing doublet, though I'm going to make it light blue to match the sprite colour. 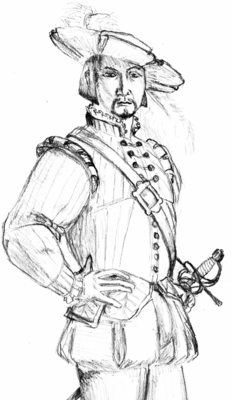 the codpiece is only half visible which avoids dragging the eyes of modern viewers too much, and if you avoid coloring it in bright red, it will probably look "original" instead of "vulgar" to our modern eye

so I say this one is worth coloring... go for it
Fight key loggers: write some perl using vim
Top

some pointers before you jump into coloring:

- the facial placements are off slightly, they seem to sit on a plane not a 3d object. eyes smaller, eyes and eybrows lower, mouth higher, ear more from the side, bigger, lower.
- the figures right arm and shoulder are seen nearly from the side (like in your (beautiful) ref) but the rest of the body is rotated more towards the viewer. bring the left shoulder/bodyhalf back and down.
- the firgure is off-balance, rotate him a bit clockwise.
- the overall size of the hand is ok, but you need to give it more plam, less fingers.

i'm not interested in a long discussion about those suggestions, just take care that you improve your drawing. i don't care what's historically or anatomically correct, it just has to feel right for the viewer. you won't stand next to your creation with a ruler in the hand, telling everybody that it may look wong/strange but is right.


i look forward to see your next version!

I agree with some of your criticism, and with some I agree that it needs work, but not exactly the way you said. What I don't agree with is that "it has to feel right for the viewer" is a valid form or criticism. Which viewer, for starters? While it's true that being factually correct doesn't always make things look right, there is always a reason why it still looks bad. As long as such reasons are not stated, I'm going to take the "doesn't feel right" comments as personal opinions, not as criticism.
Tiedäthän kuinka pelataan.
Tiedäthän, vihtahousua vastaan.
Tiedäthän, solmu kravatin, se kantaa niin synnit
kuin syntien tekijätkin.
Top

the viewer is the one who looks at the drawing apart from the creator... you know, the person you do this for, the one who plays wesnoth. and those people aren't valid ciriticizers (validated by whom?). they are just recipients. they won't acitively think why something is wrong, that's not their problem and not what interests them. they will just "feel" that something is strange. and behind that is hidden a mistake by the drawer pretty surely. they don't have to give you reasons - it is your job to find and correct them and produce a picture that is right and feels right (and i believe it is far more important that the general impression you evoke is right).
thus all what i wanted to say is: don't dismiss critique so easily and feel sure in the position that you are right. if i look at the first pages of this thread i see a couple of persons telling you they are "unconfortable" with the pose or with the hand - and i see you answering in long verbose posts that you did it on purpose...

and i hope you can distinguish between the anatomical/perspective problems i see in your sketch and this general discussion about critique. so i would be interested with which of my points you do not agree.

don't dismiss critique so easily and feel sure in the position that you are right. if i look at the first pages of this thread i see a couple of persons telling you they are "unconfortable" with the pose or with the hand - and i see you answering in long verbose posts that you did it on purpose...

And cranking out new versions, even trying out whole different approaches, when the response isn't what I expected, so saying I'm deaf to audience feedback is quite a stretch. I lay out the rationale for my decisions in the hope that it will trigger discussion that brings light to why people are unconfortable with something. If I just change things without understanding why they need to change I learn nothing.
Tiedäthän kuinka pelataan.
Tiedäthän, vihtahousua vastaan.
Tiedäthän, solmu kravatin, se kantaa niin synnit
kuin syntien tekijätkin.
Top 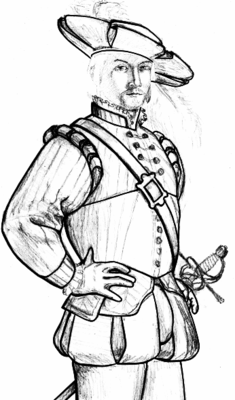 the face is *much* better now!

but his rear hand needs another revision.
Top

What rear hand? You can see hardly any of it

sorry, i thought you'd see it:
it's not clear what he is doing with this hand - is it just hanging there, is it resting on his hip or is it resting on the rapier's hilt? the tips should taper more. and the fold of the thumb's joint goes too far in.
Top

Usually, when there is need for criticism, it's safe to assume that the other person doesn't know what's wrong -- otherwise they wouldn't have drawn it that way to begin with, would they?

The hand is supposed to rest on the sword, so that the sword passes between thumb and the palm. I hope it becomes more apparent once the sword is properly drawn. If not, I'll have to move the hand up a bit.
Tiedäthän kuinka pelataan.
Tiedäthän, vihtahousua vastaan.
Tiedäthän, solmu kravatin, se kantaa niin synnit
kuin syntien tekijätkin.
Top

[Debatable personal opinion]
I *love* the new facial design ! But the whole character attitude looks a bit artificial and inexpressive to me. Don't forget that campaigns take place on battlefields : classical artists are sure an excellent reference to work with, but keep in mind that characters are posing! They intend to get a work that highlights their noble stature rather than their fighting skills or their attitude facing opponents.
However, it's just my opinion, drop it if you don't care, your work remains very good !