Internet Meme Era
Or the Pirates vs Ninjas etc. era!
**Post is continually edited to be kept up-to-date**

Do you think the constant internet debates about who would win a fight between a pirate and a ninja, or any other stereotyped character, are hilarious? Well rejoice, for these are about to take place on Wesnoth's battlefields!

For your convenience, here is the most recent version of IME for the 1.8 BfW branch.

Follow us all over the BfW forums!
Factions details and unit trees (just two posts below)
Art Thread
WML Thread (sorta, it got mixed up with other stuff)

There is a ninja faction in Mercenaries Era that you could steal the artwork from.

Re: Inquiring about some pirate vs ninja vs others era/facti

These are the unit trees for IME. Please note that they are not exactly definitive (yet). A lot of unit images are not shown: it's because the sprites are not done yet. In the faction, they are represented by various place holders. 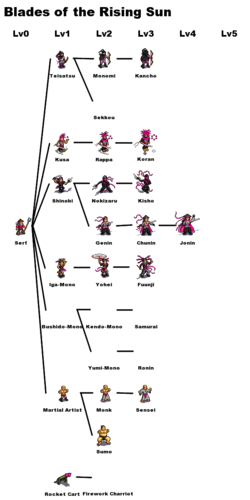 the mercenary faction of the mercanaries era has a sailor unit that lvls up into a pirate unit. Just thought you'd like to know.
Top

Thank you, Wesfreak. I did find them, and scourred the eras some to find some sweet ninjas (the cult or something) in Ageless Era.

I am starting work on scripting the ninjas today (although I prefer the pirates and have interesting ideas for cowboys, these will be a good practice. Plus, I've got the units more or less ready. I can try to fully animate them and modify them a bit later on) I however feel a bit bad about just taking art in other factions, even though everyone seems to do so and the Wesnoth content is supposedly free of use.

By the way, I'm actually looking for the movetypes. Wehere can I get some info on that, and alternatively, how do I create new ones? I'm gonna look at the wikis and other eras some more.

Thanks for your concern, people!
Jazz is not dead, it just smells funny - Frank Zappa
Current projects: Internet meme Era, The Settlers of Wesnoth
Top

I used to have some cowboys that I was using for my SilverFist era but I threw them out..... However I think I will remake them eventually and when i do you can have them
- Dipsey
Top

That would be really great, thanks! I might also have spotted some units suited to become cowboys in the Gunpowder and the Hammers eras.

Also, from a quick glimpse at my ninja unit tree, I might lack lv1 units, and maybe some other branches along the way for variety. I might have to rethink it and scavenge some more sprites. Eventually (I'd like to test it out first, though).

On that subject: I have done some scripting with the ninja sprites I had and wanted to test them, but I can't seem to set up the era properly so it is detected by Wesnoth. I have read the wiki and compared with other working eras like EoMa and EoM, but to no avail. Do note I am trying to set it up for 1.7. Any help on this matter would be greatly appreciated.

Here are the copies of the files I have in my directory (Internet_Meme_Era):

(by the way, since we're at it: how am I gonna have the era uploaded on the main server once it's about ready to be distributed for beta test?)
Jazz is not dead, it just smells funny - Frank Zappa
Current projects: Internet meme Era, The Settlers of Wesnoth
Top

Before saying anything else, my last evening's problem about era/faction creting still stands. If anyone can help me, he can look at the previous post for the files, it would be greatly appreciated.

Aside from that, I was just gonna say I scavenged some more units and was maybe going to go the frankensteiner's way. I'll give it go, at least. I've also rethought my unit trees a bit, but I have no time to really rework it today.

Oh, and I'm editing my first post to reflect the actual tangent this project is going, give some info and all.

If it was me, I wouldn't name all the units all things like you have. Since the era is mostly a fun era, I would go with fun units and ditch all pretense of historical resemblence. A robot faction like you said would be a nice idea, as would zombies (if you use the mainline walking corpses and souless graphics, thats lots of zombie types already, and the ghoul looks rather zombie like). A Spartan 300-type faction is another idea.

I might be able to help with unit graphics later.
Conquest of the Fallen Art
Top

Dixie wrote:That would be really great, thanks! I might also have spotted some units suited to become cowboys in the Gunpowder and the Hammers eras.

I think this era will be surprisingly fun.
- Dipsey
Top

Maaan, has a more than a month already gone by?! Time flies by so fast!...

I still couldn't get around the recruiting problem, so I let the era on the side for a while. Sadly, I had to make some place to install Logic Studio 8, and I think I erased my wesnoth 1.7 addon folder, in which the era was. Meaning I lost all my units and the various art I had scavenged. Darn. I'll just have to start over.

Btw, I am a really poor artist, and even though I pretty well know the various user-made wesnoth sprites are free of use, I really feel bad stealing others' art. But I can't draw anything really decent by myself. I noticeably had quite a few EoMa sprites in my ninja faction... I'll just ask the EoMa artist for permission this time around, I guess. And the other Eras, too.

And there won't be much work for the two next weeks, since I'm pretty busy with my end session at the university.(is it how you say it? I can't figure it. I'm a non-native english speaker, sorry)

Btw, I've continued gathering ideas, so I'll post 'em in the first post to define the three main factions more. I'll come up with the unit trees sometime this month.

Oh, and before I go, I'm still looking for a decent name for the era

Hey there. Ideas were going through my head, so I've postponed my homeworks for tonight and worked some on rebuilding what I had. So far, I gathered the sprites and updated my ideas on the first post. You will also notice that I put up unit trees for the ninja faction on there.

Also, I know i've borrowed absolutely all the unit sprites. And I didn't even ask like I said I would. Shame on me. I hope this is jsut temporary, however, since I would someday like to have distinct art for this era. But I tried frankensteining some units and the result was awful, really. And I've got no time or energy to put on this at the moment. I might try to work something out this summer... Anyone's help is appreciated, btw.


Aura wrote:If it was me, I wouldn't name all the units all things like you have. Since the era is mostly a fun era, I would go with fun units and ditch all pretense of historical resemblence.

Well, I tried finding some other names which would look funnier. It went something like "badass ninja", "stealthy ninja" and so on and so forth, but I kinda thought it sucked. Feel free to suggest better names if you have any ideas, though!

Once again, guys, thanks for reading and all. More news later on.
Jazz is not dead, it just smells funny - Frank Zappa
Current projects: Internet meme Era, The Settlers of Wesnoth
Top

I've downed some ideas and finalised my unit trees. I've found sprites for every unit. I know, they're all burrowed. I know, they don't all fit exactly as I'd like ('specially the pirates, ugh!), but, well, life's life. I'm a poor pixel artist and I don,t have the time right now. I just wanted to have somewhat fitting frames just to do the codes and starting working on the overall balance. Which I should be able to start about next week! Yay!

Hey, here is a cowboy... Like I said i'd make. It's only the beginning. But, it should work until I get time to finish it.... If you need spaceship art just check out my era.

EDIT: You can find the era by clicking the link in my quote below.

Hey thanks a lot!

The unit's not bad. It's doesn't really fit the wesnoth style, but he has a kinda nice cartoonish look, which I don't hate. It could be nice if the whole era fitted it. I don't want to put too much of a burden on you, though. We can eventually discuss how I imagine every line of unit, if you want to go through with this, and you can add you grain of salt too (is this saying valid in english?). I'm open to suggestions, and I don't even have that much criterias or ideas to begin with. Just some vague guidelines.

Anyhow, at the moment, I am gonna code the main part of the units and try to balance that out a bit. I realise it will be a tremendous job, even more so if I want to balance it with mainline. So far, I threw some stats on an excel sheet and did about half of the ninjas' faction. I might link a pdf or something when I'm finished. I might need your help on this, guys, if any of you are interested!

Appart from that, I'll look more closely at the art when I'm halfway satisfied with the codes and stats. That time will also be the time I'll start thinking of additionnal factions, such as the aforementionned robots. Your spaceship art might enter there, Dipsey, I dunno. I haven't looked at it yet, it ain't really in my priorities for now.