I tried to upgrade the old castle gfxs. Here you go. As you can see the keep ain't ready yet. Should I continue this work? 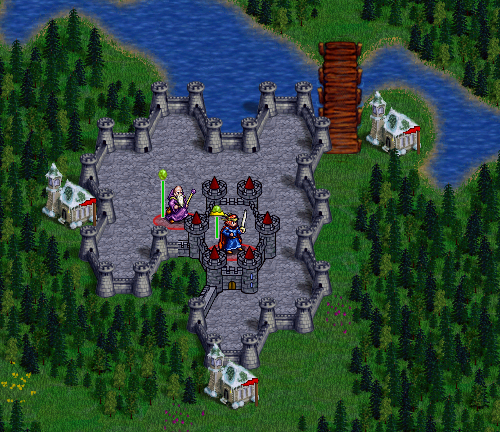 Wow Pekka, this could be the beginning of a beautifull friendship.
Signature dropped due to use of img tag
Top

Replacing the current ones are on the todo, so great initative. They are very in-line with the direction we want to move (more advanced shading instead of sharp outlines etc).

We've started on a status page for terrain here:
http://www.wesnoth.org/wiki/Tiles_Status

Maybe im Odd One, but i dont like it, and i dont know why...

They look like the same height as the old ones.

I guess they could be made a bit higher, a "row" or two of stones together with slightly higher towers.

You don't want to cover to much of the units inside either.
Top

I know they aren't done, but that one sticking out onto the bridge looks a little off. The floor of the castle hexes could use a slight recoloring to make it fit with the new walls, as well. Very nice work though, the towers look "elvish" without being too fancy.
Top

Loki wrote:I know they aren't done, but that one sticking out onto the bridge looks a little off.

That has to do with how the tiles are layered. Some of the structures are just a bit to big to not overlap somewhat when placed next to each other. Pekka shouldn't worry about it, it's not spesific to the castle gfx.
Top

These castle is really nice even the shadows are right.
This girl, this boy, They were part of the land. What happens to the places we used to tend?
She's a hard one to trust, And he's a roving ghost. Will you come back, will you come back, Or leave me alone?

Looks good but I would suggest two things; first, the arches/doors are irregular sized on the different towers. The NE tower arch/door is significant smaller; I would also like them less square. Second, the towers are rather plain and unadorned, arrow slits would make them more interesting and authentic.
Top

Wow! These make the current castle graphics look like the trash they are in comparison with these! Wait a minute, that doesn't mean anything.... well they're great anyway.

It's all fun and games until someone loses a lawsuit. Oh, and by the way, sending me private messages won't work. :/ If you must contact me, there's an e-mail address listed on the website in my profile.
Top

Welcome to the team!

It's impressive for a first contribution.
My only quibble would be: it seems odd IMHO for towers to narrow so rapidly all the way up. Often the base of a tower was more angled, but then came closer to vertical for most of the tower's height.
Feel free to PM me if you start a new terrain oriented thread. It's easy for me to miss them among all the other art threads.
-> What i might be working on
Attempting Lucidity
Top

What struck me immediately about these images is they look like rooks, in chess. Rooks are intentionally stylized, and don't really look like real castle towers. So, artistically these are very good, but they just don't make sense from a design point of view.

Don't get discouraged by this, though. I think they would be great if you would just fix that one minor flaw.

For I am Turin Turambar - Master of Doom, by doom mastered. On permanent Wesbreak. Will not respond to private messages. Sorry!
And I hate stupid people.
The World of Orbivm
Top
Post Reply
206 posts