The Era Default Magical Noob is an add-on made to give players more advancement options, with a number of new units added to the default factions. Each new unit is made with a consistent art style to ensure that they blend in with the existing units of the default factions. Additionally, two new factions were added; the Empire (note: the structure of this new faction is quite different from the others) and more recently; Zombai (note: zombie AI faction made to be usable by computer player to effectively turn any multiplayer scenario into a zombie survival, scroll down for more info).

Here is a screenshot of some of the units: 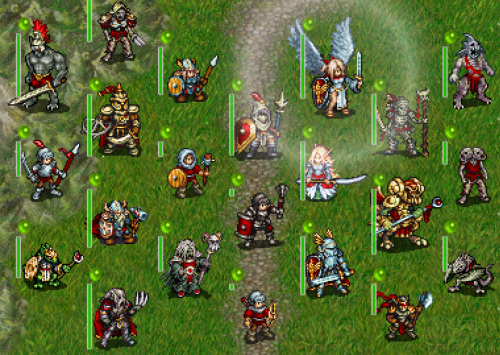 Note I: Although not mentioned on this list, all other default advancements options are still available, e.g. Red mage can still advance to Arch Mage or Silver Mage as normal.
Note II: the arrows below ">" represents advancement into the other unit. "(New)" are units added in this Era.
Note III: The screenshot above only shows some of the units, not all. Are you able to guess which is which?

Empire overview:
They are relatively cheap, with exceptional attack and resistance for their level, which is level 0… and they also have very low hit points. Not all of the units can advance, only conscript units have the capability to do so. All empire units are available in both genders.

In game description:
The Empire is a faction of Humans with technological prowess unmatched amongst all the human nations, no other can manufacture armours as strong and light as them, and their firearm advancements rivals even that of the dwarfs, or shall I say rifles... Although their standard issue armament is top tier, but their training on the other hand… is somewhat lack luster to say the least… This earned them the nickname The Noob Empire, coincidently the empire itself was founded by a mysterious yet magical noob many centuries ago.

Zombai overview:
The Zombai faction (Zombie AI) was made for AI use to turn any multiplayer scenario into a zombie survive game, although designed for computer use, but human players are free to use it to take on multiple other players if they so wish. As mentioned, this faction can easily take on more than one opponent, thus it is strongly advised to bring a few allies along if you intend to fight it. Do note, this faction will progressively unlock stronger units as more turns went on.

Add-on has been published. Feel free to try it out and provide feedbacks. Thanks.
Last edited by Magical_Noob on April 27th, 2022, 2:55 pm, edited 24 times in total.
Top

'War Priest', can recruit 'Zealots' anywhere on the map next to itself, but have additional costs compared to recruiting from keep.

'Zealot' units are level 0 with no advancement, but can convert defeated enemies into zealots. Players can choose to pay gold to promote them into 'War Acolytes' (level 2s).

Empire faction Auxilia, 'Empire Exalted Chaplain' and 'Empire Exalted Officer' can now convert non Empire units in their army next to them into 'Empire Elite Auxilia' by paying gold, normally this option would not appear as they can only recruit empire units on normal maps without mods, but will be usable in maps like work conquest, etc.