I am currently playing an add-on campaign, called Campaign: The Ravagers.

All fine, nice story, artwork, and very interesting concepts. The weakness-idea is a nice one; not sure if it works that well,
but it is unique. Anyway, this is not what I want to talk about - instead, two things, more general.

(1) It would be nice if we could somehow determine/set the font size easily, in particular of the text in the narration
e. g. when the story unfolds (and is described). I'd like a larger font here, so perhaps this could be controlled via
the preferences. (If that already exists, please disregard.)

(2) The other, more important part is ... right now emotes typically are shown via * such as:

*sips from her tea as her eyes turn dark again*

Or something like this. I find it hard to read, even more so as regular text appears describing something,
and also sentences said by the actors.

I would thus like to propose colours, e. g. different colours that could be used.

And, perhaps, to also style them in a special way, so that they each appear on a new line or something
like that. This may also require that the narration could be less restricted than merely on the bottom
part of the interface. So perhaps the lower 40% or so, so that it may flow a bit into the middle. During
these takls/events, no in-game action typically happens anyway, so the available space could be
used more efficiently.

The reasoning for the above is mostly one of convenience, I think, in the sense that we can more
easily focus/read what is going on. For young folks this may not be so important, but we older
folks may not have the best eyesight anymore; so user interface improvements in this regard
would be really great.

The above may not require a lot of changes, I assume, as colours are already available; and the
font size can probably also be controlled somehow (not sure how; I am not an expert in SDL).
Top

There used to be a font scaling preference in version 1.13 - unfortunately it was somewhat buggy and was removed before 1.14 was released. 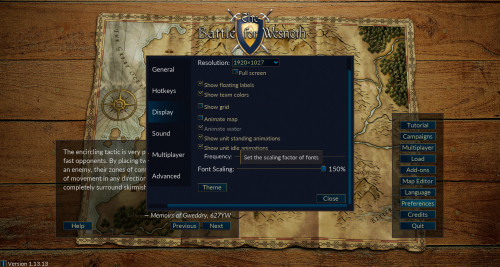