We are three friends that are used to play the Battle for Wesnoth together since quite long time now, we have often talked about how cool it would be to create our own mod, so we recently made the first step and started to work on a modest mod ininspired by the Lord of the Rings' universe.

Here is the first release of the LotRBattle for the Rings era with this v0.5.
What's in this v0.5?

Why releasing it now?

We are willing to improve this version before calling it v1 but we also want some feedbacks to help us fixing bugs that we may have missed and balancing units and factions.

-Last bugs and typos fixed (finger crossed).
-Units and factions more balanced (if needed).
-Two more factions regrouping the Isengard and the MordorEvil Forces into one and the rest into another.

There is a lot we want to do, but as new moders we know we have limits, so we advance step by step, here is a non exhaustive list of what we have in mind for this mod, or a related seperate mod but are not sure when we will implement (or even if we will) :


Where can you contact us and what is the link to the project's github?

This is our email : videogame.ate@gmail.com
and here is the GitHub : https://gitlab.com/videogame.ate/BftR

In order to respect Intellectual Properties for the Lord of the Rings we modified the add-on's name as well as any copyrighted symbol or character/place's name .
As we assume our inspiration comes directly from Tolkien's work, for some names we searched the ethymology of the original names and created new names assembling indo-eureopean roots.

We also took benefit of the fact we had to re-work the add-on to improve the graphics of units, portraits and faction icons.
If you want a look :
Spoiler:
-the units
Spoiler: 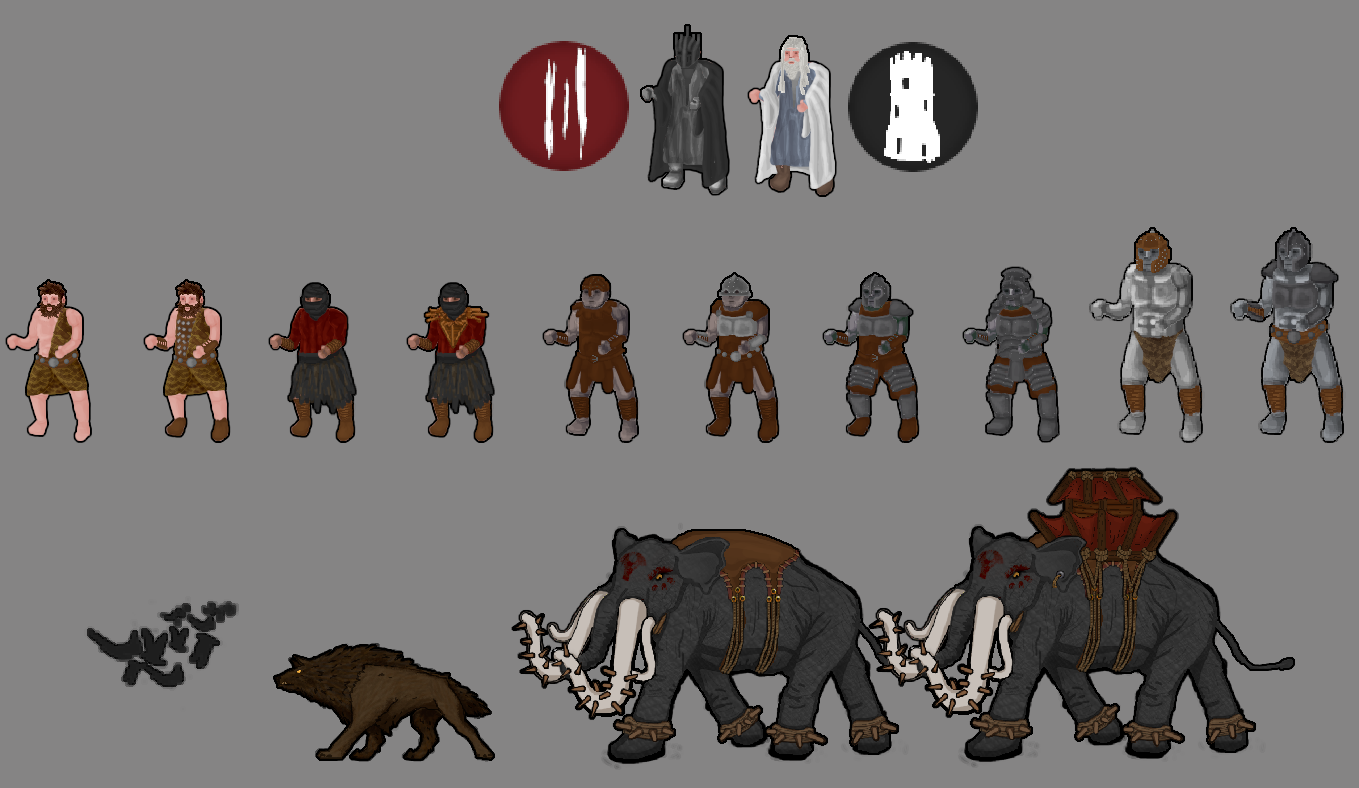 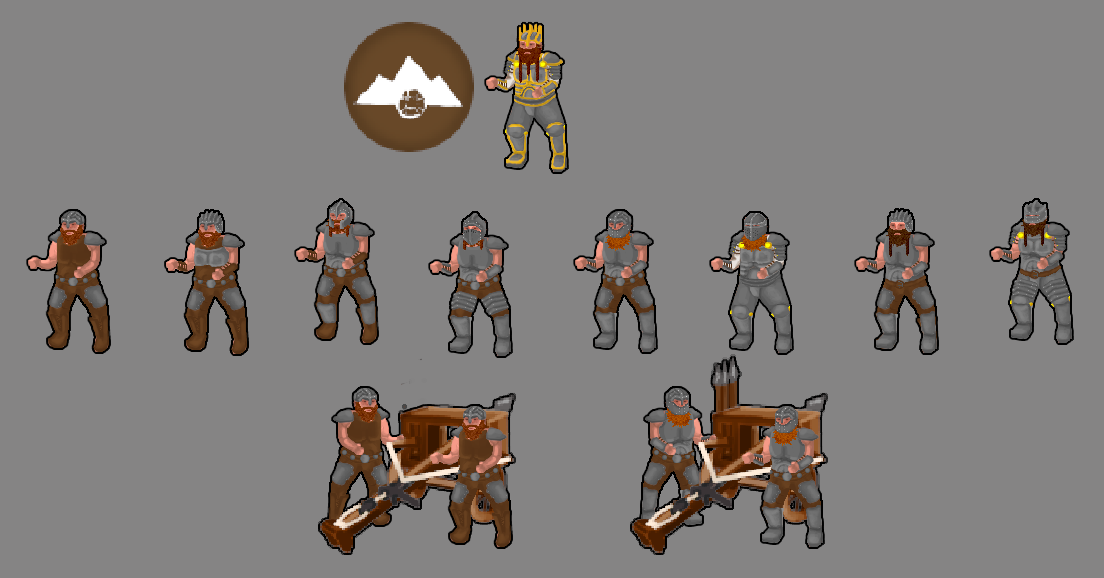 For the moment we only kept one map as we are reworking the others, partly for the IP violation issue, but we will add them soon.

After three monthes of inactivity we're glad to tell you that we updated Battle for the Rings to v0.6.8.
We hadnt brought major enhancements so we are not in v0.7 yet (but this will come sooner or later

) anyway here is a list of what has been added since 0.6.6 :
-Graphism : -new portraits for every elves units (in units' description) ; faction flags (in factions' description)
Spoiler:

Im sorry to say this, but note that our addon server does not allow this by rule 2 in viewtopic.php?f=8&t=24320

(this doest not mean that we disallow you drom writing/playing this just that is cannot be uploaded to the official wesnoth addon server)
Scenario with Robots SP scenario (1.11/1.12), allows you to build your units with components, PYR No preperation turn 1.12 mp-mod that allows you to select your units immideately after the game begins.
Top

Dang!! We tough it would be ok after seeing LotR mods have been made in video games such as Total War and knowing that we don't seek any money from any sort. We should have checked the rules, anyway, if that cause problems we will modify our mod in order to fit better to the rules.
Edit: if you have any other advices or feedback to give us we would be thankful as it is our first mod.
Top

Price (or lack thereof) does not enter into the determination of a violation of Intellectual Property law. But it can effect the penalty imposed.

Lack of enforcement does not imply consent. It may be that the owners of the IP don't know about some violations, or have decided it's not work proceeding against everyone, right now, and are concentrating on bigger fish. And it might be that the sites where you saw violations don't have rules of their own, or have not had the violation pointed out to them. You can be sure, however, that someone paid for the right to use the name of likeness of Gandalf in all those movies, games and Lego kits.

There is nothing wrong with honoring someone else's work by lifting concepts. What you have to avoid is using identifiers (trademarks, names, etc.) and expressions of ideas (art work, music, prose, etc.).

I didn't do a deep dive into the GitLab tree, but the work might be salvaged by renaming key elements. Probably need some work on dialog as well. Didn't look to see if some artwork or maps might need modification.
I forked real life and now I'm getting merge conflicts.
Top

ATE wrote: ↑February 20th, 2019, 10:33 pm Dang!! We tough it would be ok after seeing LotR mods have been made in video games such as Total War and knowing that we don't seek any money from any sort. We should have checked the rules, anyway, if that cause problems we will modify our mod in order to fit better to the rules.
Edit: if you have any other advices or feedback to give us we would be thankful as it is our first mod.

This seems like a really great add-on! One option could be to rename all the copyrighted areas.


Pentarctagon wrote: ↑February 21st, 2019, 12:50 am The add-on has been removed from the add-ons server in the mean time. Feel free to re-upload it once the issues others mentioned have been addressed though.

@dev's - If the add-on and content is renamed to not violate copyright would that be sufficient?
Creator of: The Reign of The Lords Era,The Gnats Franken Dungeon
Co-designer of the (not-wesnoth) space combat video game Planet Bounce.
Top

First we wish to thanks you for your kind answers, especially Tad_Carlucci for his enlightening post on a subject we don't handle (legislation stuffs) and The_Gnat for his heartening post.

We just have put ourselves back to work to modify our mod, which mostly consist of giving more generic names to places and characters and to rename the add-on as we dont use any music atm (maybe we will add some if we find free-licensed ones) and all the artworks is ours.

We will release it and post a new thread under the new name soon, we also spotted 1 or 2 minor bugs we are fixing.
Once again thank to everyone for having a look on our work and see you very soon

ATE wrote: ↑February 22nd, 2019, 7:08 pm We will release it and post a new thread under the new name soon, we also spotted 1 or 2 minor bugs we are fixing.
Once again thank to everyone for having a look on our work and see you very soon

Lord of the Ring Era is dead, long live to Battle for the Rings Era

After few days of work, we are glad to announce that Battle for the Rings is now avalaible in the add-on server's list.
We've updated the topic's name and edited original post to tell you what's new in this v0.6
Top

Awesome I will definitely take a look at it!
Creator of: The Reign of The Lords Era,The Gnats Franken Dungeon
Co-designer of the (not-wesnoth) space combat video game Planet Bounce.
Top

Weird, we made lot of tests yesterday on Isard's cross, and we found some graphic bugs which didnt make the game crash and that we should have corrected. We updated the addon to v0.6.3, was that the version you had while having your errors? If you were using previous version that may explain the out of synchronisation trouble for the server didnt have the same version as you. To solve this you can create a local game, but we would advise you to update the addon from the server list as we corrected some minor stuff.

Edit: We are going to make some further tests, anyway if you had the last version when having your troubles please tell us.
Top

It causes oos errors just when installed, even without playing it, i was just observing an isar game with no mods, and traced the error to this addon, have v0.6.3
Ports: Velensk's tower defense, dov's deep shrine, Scrolling survival, Scrolling survival Co-op, Temples of the nagas.
Addons: Tower defense maps , some ANL scenarios like: ANL 3p "A New Land" survival type, and ANL Co-operative map for 2p
Top
Post Reply
21 posts