I'm trying to make routes for my campaign, but I'm not sure how to identify the pixel numbers of the map. I looked into a campaign template, and here's an example of what I mean:

I don't know how I'm supposed to know which pixel is where I want the dot to go to. Is there software you guys use? For example, if I wanted to find the location of Estmark hills in the attached map, how would I go about that? 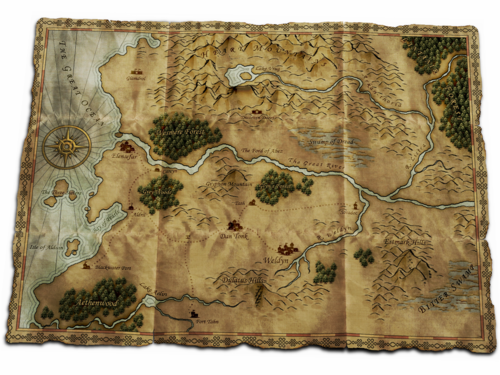 There is a trackplacer tool written in python which is available in the wesnoth\data\tools directory.

You can read more about it here: https://wiki.wesnoth.org/Authoring_tools
http://www.wesnoth.org/wiki/User:Sapient... "Looks like your skills saved us again. Uh, well at least, they saved Soarin's apple pie."
Top

If I recall correctly, when I made my maps I just used GIMP or similar software to figure out the coordinates of the target location. That can certainly get tedious when plotting out a long track, mind you.
Author of The Black Cross of Aleron campaign and Default++ era.
Maintainer of Steelhive.
Top

Yes, any image editing software will do, such as GIMP or Paint. They'll all show you the pixel coordinates of where the cursor is, somewhere.
Top

Sapient wrote: ↑
July 16th, 2018, 1:26 pm
There is a trackplacer tool written in python which is available in the wesnoth\data\tools directory.

The problem is that trackplacer is outdated (it requires the obsolete PyGTK toolkit, which doesn't run on Python 3) and terribly bugged (it doesn't run at all on Windows, for example). I originally planned to rewrite it with Tkinter/ttk, but I never found the time to do so and now there's even the problem with HiDPI screens; because from October/November I'll be busy again, I might just wait for Qt for Python (formerly PySide2) to be officially released without the Tech Preview flag before attempting again to work on it.
For these reasons, I suggest that you don't even bother trying trackplacer; do what Celtic_Minstrel and zookeeper said, instead.
Current maintainer of these add-ons:
1.14: The Sojournings of Grog, A Rough Life, The White Troll (co-author), Wesnoth Lua Pack
1.12: Children of Dragons
Top

Elvish_Hunter wrote: ↑
July 17th, 2018, 8:50 pm
The problem is that trackplacer is outdated (it requires the obsolete PyGTK toolkit, which doesn't run on Python 3) and terribly bugged (it doesn't run at all on Windows, for example).

That is great information, thanks. I have updated the wiki, so that others who find that page will know it as well.
http://www.wesnoth.org/wiki/User:Sapient... "Looks like your skills saved us again. Uh, well at least, they saved Soarin's apple pie."
Top

I once wrote a little GIMP script that I've used for plotting a lot of journey markers. However, I've never bothered to properly finalize it, so it's kind of hacky, clumsy and undocumented and I don't promise to provide any kind of support for it, should one choose to try and use it.

I think this is how it works:

1. Open up a map.
2. Draw paths on a single path layer called "journey", wherever you want the journey paths to be. You can make only one stroke per path!
3. Make a new non-background layer and select it.
4. Run the script (Filters->Wesnoth->Journey Helper).
5. Each path should now have a text layer next to it with the coordinates of each dot on that path; copy-paste the contents and use as you wish.

The black dots get drawn using the current pencil/brush size, so you may want to adjust that before (re)running the script.

wesnoth-journey-helper.zip
Unpack to wherever your GIMP scripts are; works on GIMP 2.8, haven't tried it on newer versions.
(1.24 KiB) Downloaded 145 times