This mod transforms castles and villages on any map to the faction's style that controls it.

Aditionally there is a checkbox under the custom options menu - allow redesigning.
On conquering an enemy castle, it can either be ruined or redesigned after your faction's fashion.
On reconquering an allied castle or your own, it will be either repaired or restored to its original design.
The exception is the Undead, who will generally just ruin castles, because their own castles are ruins in the first place. Additionally, Knalgan and Northerner castles can't be ruined because of the lack of mainline sprites.

Note: The mod introduces a gameplay change. When you mouse over a castle, there will be info about which faction
it belongs to, so players who select random no longer have an advantage over those who pick a faction in multiplayer.

Be aware you can see enemy castles even through the fog of war, so you can tell what faction they have outright. Mouse over their castle if you are unsure which faction it belongs to. <- This message is displayed every time you start/load a game that uses the add-on.

Since 1.3, the mod is partially Ageless Era/Other Eras compatible. The factions that don't have a special style can still capture castles, but
only the labels will change. The mod will try to detect the correct style based on the custom faction's name.
It's compatible with mostly any language that uses whitespaces. 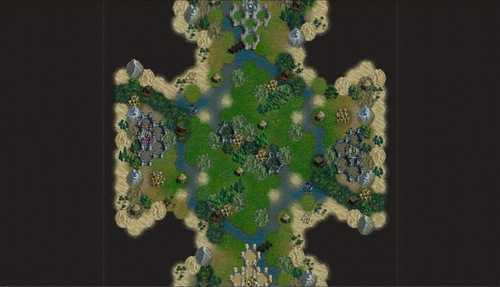 1.1 -
Now when you mouse over a castle, the description for the terrain tile will say to which faction it belongs to, so there can be no doubt.
The mod still doesn't need to be downloaded for others to play (this is accomplished using a lua theme_items hax)
Note: Yes, this changes gameplay. Players who select random no longer have an advantage over those who pick a faction in mp with this mod.
Top

1.3 - A heckload of changes
-Fixed the mod not working for castles that aren't claimed at the start (that's castles that have more than 1 castle/keep tile and don't have a unit on the keep tile at start). It would spam lua errors any time a user moused over one of those castles.
-Fixed another lua error causing bug that happened for the Undead faction when they tried to capture an unclaimed castle.
-Added the option to not transform castles with flooded/swamp tiles (off by default).
-Made partially compatible with Ageless Era/Other Eras. The factions that don't have a special style can still capture castles, but only the labels will change. The mod will try to detect the correct style based on the custom faction's name. Previously trying to use the mod with other Eras just created a ton of lua errors.
-Added ownership status labels to castles, like I'd done with villages. So you can see if a castle is under enemy/allied or your own control. (This controls the capture/raze mechanism).
-Made compatible with other languages. (A big one). I didn't realise the mod didn't show faction labels for castles or villages in other languages (potentially putting people using those languages at a disadvantage...) Works nicely for the languages with noun_adjective order such as French, as well. Doesn't work for Japanese and Chinese.
-Improved the code in a lot of places.
That's all I can remember at the moment.
Top

1.4 -
-Add-on is now fully Ageless Era Compatible. Every faction defaults to one of the existing styles, in addition there are 3 new styles that only work outside of the mainline era -Snow, Tribal, Aquatic.
-The mod is still potentially compatible with other eras, as it uses a set of keywords to query the custom faction and find a vanilla style match.
-Removed the fanfare sound on village capture.
-Removed the botched translations. We now offer grammatically correct and neat translations in these jolly languages:
Spoiler:
-Aafrikans
-Catalan
-Czech
-Danish
-Dutch
-Esperanto
-Estonian
-Finnish
-French
-Galician
-German
-Greek
-Hungarian
-Icelandic
-Indonesian
-Irish Gaelic
-Italian
-Japanese
-Polish
-Portuguese
-Brazilian Portuguese
-Romanian
-Russian
-Simplified Chinese
-Slovak
-Spanish
-Swedish
-Turkish
-Ukrainian
(Sadly not the startup message though, but I'm open to contributions from people who actually speak those languages)
Top

1.4b makes this compatible with the Randomizer.
Top
Post Reply
6 posts • Page 1 of 1