Nice campaign u made here. Its short, simple and fun. just finished it on Hard on BfW 1.13.11. The story and dialogue is well written. My feedback-

Scenario 1- Nothing to say. Textbook 1v1 scenario
Scenario 2- Took out the orcs first and then cleaned up the undead. allies completely useless.
Scenario 3- This one gave me some trouble. had to restart several times because of poor play and the ambush. Won by Defending near starting area
Scenario 4 - Easier than it looked. Recalled all veterans. Sent main force north to deal with dwarves, and a small detachment east to grab villages and distract humans.
Good job. I will play your other campaign soon enough.

Thank you for your feedback! It's so hard for me to tune the 'Hard' difficulty because I always play on easy.

I have to warn you, the Drake campaign seems to be too easy on Hard difficulty. I have a few suggestions from players on how to improve it, but it may be some time before it's an actual challenge.
Top

I played it a few days ago in (on Wesnoth 1.12), it was simple but really enjoyable and smooth, both in the game-play and in the writing. I think it's a great introductory campaign for the dunefolk, allowing to gradually getting acquainted to the various units. I also loved the decadent/apocalyptic atmosphere throughout the story.

First of all I want to report a bug: in the third scenario all elves tend to wander around randomly after turn 5, leader included (see replay). This is because the filter for the lurker micro_ai uses type_adv_tree, which is not recognized in 1.12, so it's basically an invalid filter and all units are selected. You have to use just 'type' with the full list.

I played on hard and found the levels relatively easy, but that's fine for the goal of the campaign. Only in the last one I had to bank a bit because I felt low on gold, but luckily there are many nearby villages on favourable terrain (I still sloppily lost lots of units, including an expandable hero). My favourite was the second scenario, mainly because the enemies coming from two opposite directions put me in front of more decisions to take. My least favourite was probably the third, perhaps because it was just about waiting for elves to attack me from flat terrain and after the bug triggered it looked just too random.

Probably once you fix it is fine as is, but, if you like, consider this option: transform this into a 'move-to' scenario. It makes sense storywise, the priority here is run away from the forest, and it would make it more interesting as the player will be forced to move into bad terrain (forest/flat). Lurkers will be more dangerous, and you may add some reinforcements after some turn, to motivate the player to move faster. Also, all scenarios are 'kill the leader' now, so it would add some variety, which I think is always good.

Thanks for the campaign and keep it up!

Culprit of Hunters of the East, Return from the Abyss, Children of the Dust and The Wolves' Last Path
Top

Thank you; theses are very helpful suggestions, and I appreciate you sending replays! I'll incorporate this feedback into the next version.
Top

I've released the campaign onto the 1.14/1.13.12 server with an update in Scenario 3 that hopefully improves the enemy Ai significantly. I also redesigned the map to make it more favorable for the enemy.
Top

In version 1.1.0, the first four lines of _main.cfg say that it should use translations from the campaign A Tale of Two Brothers.

A trivial bug (with no effect on the game AFAICS), and a good campaign.
Top

Thank you for the heads-up! I had no idea what I was doing with text domains, and still don’t. I’ll try to piece it together, thanks!
Top

It is one example, but renew main.cfg in this way

I add #textdomain wesnoth-Sand_In_The_Wind to the first line of other .cfg files
Multilingualization is enabled by making .pot file afterward in wmlxgettext 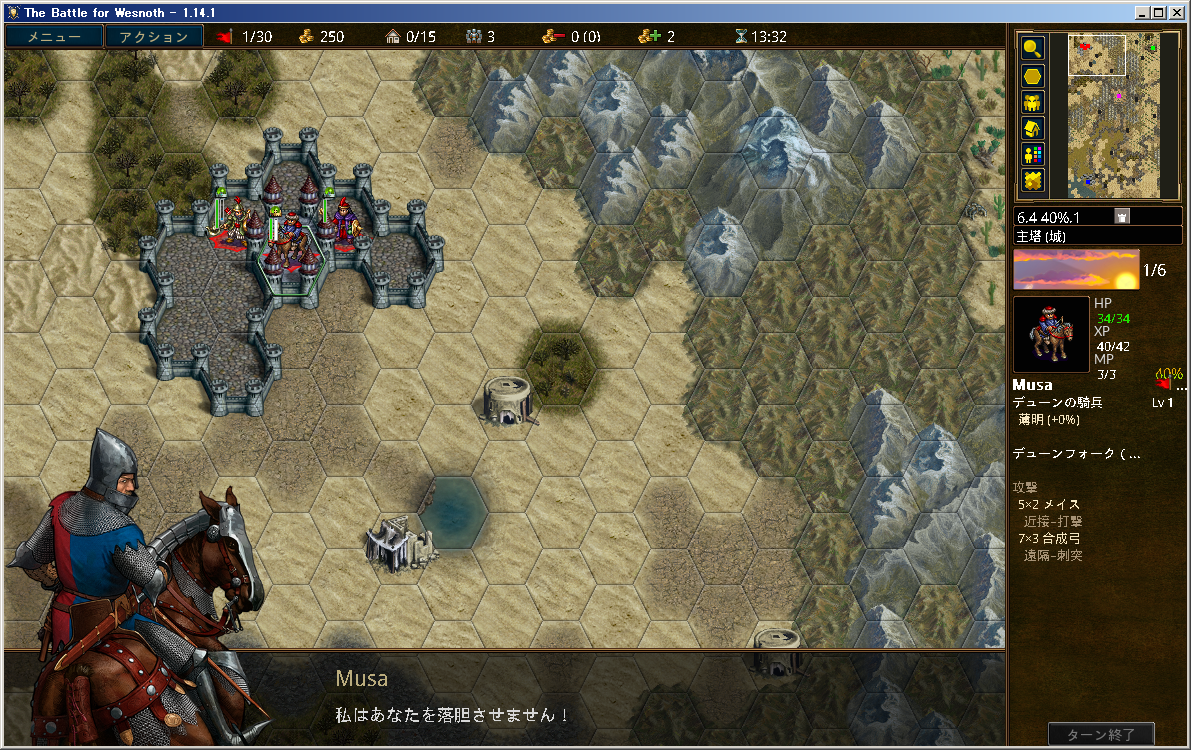 I just downloaded your campaign and I hope to play it within the near future. I did get a good look at the WML, however, and I bet it will be good. It's great to see a dunefolk campaign aimed at beginners. Good luck as you continue to refine and balance it!

The dialogue is very good, and it creates a very nice post-civilizational-collapse theme. There are a few English errors, however. They don't detract from the quality of the dialogue much, but I'm putting them up anyway so you can polish them out.

"We will never stop coming...you days are numbered, Dunefolk!" should have 'you' replaced with 'your' ('you' is a noun, and cannot modify 'days'; 'your' is the possessive form which can be used like an adjective).

"These invaders grow numerous every day." should have 'more' inserted between 'grow' and 'numerous.' This is a style error, going against the traditional idiom of including a comparison word (some other words use suffixes, but 'numerous' is not such a word). For example:
'Konrad grows taller every day.'
'Ravanal becomes more menacing the more I play 'Eastern Invasion'.'

"My kinsman Hareef has been gathering as many of the Dunefolk as are willing to join them." The mistake here is extremely minor, and doesn't create any confusion. That said, 'Hareef' should have commas both before and after it, because it is so-called 'extra information' (a noun identifying the same thing as the noun before it).

Again, I look forward to doing a full playthrough of this campaign. Thank you for creating it!
Top

Hello. I just played this campaign (normal difficulty, I'm no expert) and found it pretty good. The story/dialogue was great. The battles 1, 2, 4 were not too hard, using the sand in 1 & 4 (as hinted in 1) is the key. 2 was the most interesting as one has to deal with 2 foes and an ally. The south foe beat us badly but after beating the other foe I was just able to save my almost dead ally with a few hps to spare and turn the tide. 3 was a bummer, your guys being killed before the battle starts and then having to find a way to beat the enemy in their ideal terrain took several tries of course.
--
Any typos are the fault of my laptop keyboard!
Top

Hi,
just finished the campaign on hard difficulty on wesnoth 14. Thus I had to manage scenario 3 without the lovely patch of open ground in the middle which made me curse a lot in the beginning. But it can be done (i didn't believe at first), only to leave me with minimum gold in the final scenario. Cursing again. Could solve it by saving up gold - patience is power... And of course I needed several approaches (and curses) for the second battle as well.
So, very nice campaign, gave me a lot to think on (and curse at) in just 4 scenarios. And I always like playing dunefolk.
Good work, thanks for this fine campaign!

Thanks for everyone's feedback! I hadn't seen this topic in a long time, and it's really helpful to see what you thought worked and didn't. I'll take it into consideration, especially as we move into 1.15 (and eventually 1.16) and the Dunefolk rework
Top
Post Reply
27 posts