IIIO_Test_field is an addon that gathered ideas of gimmicks and props I thought for the campaign.
There are a few scenarios for experiencing gimmicks.
Some ideas are an improved version of those used in Mountain_Witch, and then a gimmick under development for the campaign I am currently working on.
And, some thoughts.
In addition, this campaign also functions as a resource, so please use it if you are interested.

Please tell us your suggestions and impressions to make these gimmicks better.
This add-on can be downloaded from add-ons server of wesnoth 1.12.6.

Examples of props: A unit to be used as background actor.
Spoiler:

The dancing girl looks like the singer of "Babymetal" (a band from Japan).
I like beavers.
Top

I modeled on them and made graphics of this unit.
I am glad that someone knows BABYMETAL.
Creator of "Mountain Witch" & "Castle of evil spirit"
Top

IIIO_METAL wrote:I modeled on them and made graphics of this unit.

Is that true? How nice. First i thought that was coincidence. Cool.


IIIO_METAL wrote:I am glad that someone knows BABYMETAL.

I've been watching some stuff of them on youtube a few days ago. I live in Europe, and the did some concerts here (but i didn't see those).
They are cool.

Just in case, someone doesn't know what we're talking about, a link to BABYMETAL on utube:
https://www.youtube.com/watch?v=zTEYUFgLveY
I like beavers.
Top

Thank you, Zap-Zarap.
They seem to have more activities in Europe than Japan, so I think you have a chance to see the live.

By the way, this thread is a place for campaigns and scenarios, so it may be better to move this topic to another place.
I think that Off-Topic is the best place, Shall I make a new topic there?
Creator of "Mountain Witch" & "Castle of evil spirit"
Top

I upgraded a little bit.
You can now use Mountain Witch 's male version unit, Alchemist.
His ability is to create items and create golems. Also his weapon has changed a bit, the shock gun he uses will be unusable if the bullet is used up.
You can make two types of golem, but this unit is still not useful.
Creator of "Mountain Witch" & "Castle of evil spirit"
Top

I made a stick to turn my opponent into a "pumpkin", but it was powerful enough to break the game balance.
Therefore, I will try to limit the calling condition.
1, It is easy to fail when the other's level is high.
2, the state of the pumpkin is rotated several times and it returns to the original state. (The period is random.)
3, Pumpkin state unit can not do anything, but it is almost invincible.
It seems that the success rate is still too high. 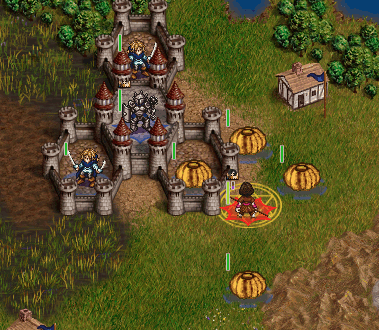 I released a new version.
The building event is about 80% complete. 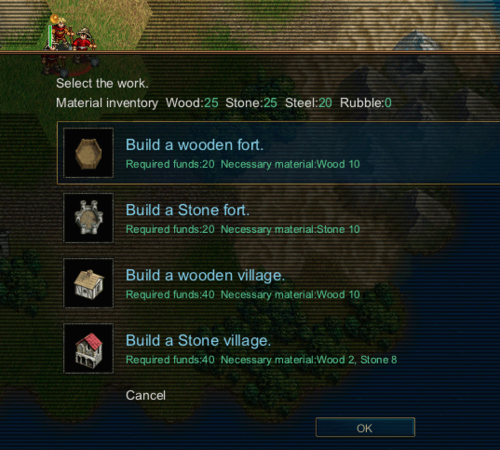 I uploaded a new version.

Version 0.5.5:
Curse stone event: Equipped with scenario where multiple enemy side and victim side appeared.
Civil engineering work: Equipped with strength reduction event due to battle of buildings.
Item Event: Partially corrected display of store.
I attached a change log from this version.

Event summary:
If the condition is satisfied, the construction menu is displayed on the menu item, so construction can be started by selecting it.
Construction is completed and the terrain is changed when the necessary construction period is passed with the walker stopped on the spot.

Degradation of durability by battle: Durability is set for buildings, and its numerical value gradually decreases by battle.
When it becomes 0 the building collapses.

Appendix Event:
In and out of the fort: If you move a unit to a fort (designated coordinates only), you can return it to recall list.
In the case of a leader unit, it ends the scenario and moves to the next scenario.

Relocate units in prestart: Place units in the coordinates that were placed at the end of the previous scenario.
Recall event is used for placement.

Selling and purchasing of materials: We carry shop events so that we can buy and sell materials. (Unimplemented)

{ABILITY_SPIRIT_TRAP}
Change the unit on the enemy side where the unit with the capability contacted, to the unit on the same side. This effect will appear before the battle begins so battle itself will not occur.

{ABILITY_SPIRIT_CAPTURED}
This is the marking added to the unit with the side changed. The unit to which this is added revives as undead after dying.
The first death will be instantly resurrected, and in the second and subsequent deaths it will revive after a few turns (turn designation possible).

{ABILITY_AMULET}
This invalidates the effect of SPIRIT_TRAP. A unit with this attached can fight the SPIRIT_TRAP unit.

Also, several races, such as undead and mechanical type tribes, are excluded from the SPIRIT_TRAP effect.