Forum rules
Before posting critique in this forum, you must read the following thread:
Locked
4 posts • Page 1 of 1

Nikita_Sadkov wrote:Fixed a little that funny anatomy with armadillo's paws growing out of its ass

The "zombie dragon" also has arse-legs. Is that a recurring Wesnoth gimmick?

So, you're saying that its all your work? I don't think so. 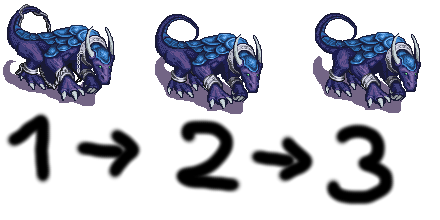 2. Is done by me from doofus-01 sprite (you can see no more chains between legs and on tail, also improved shadow of this beast)

ChaosRider wrote:So, you're saying that its all your work? I don't think so.

He didn't say that. He said he fixed the sprite a little where the back legs met the body. And he did. Like he said, they were attached too far back. They look more anatomically correct in Nikita's version.
Campaigns: Dead Water,
The Founding of Borstep,
Secrets of the Ancients,
and WML Guide
Top

ChaosRider wrote:So, you're saying that its all your work? I don't think so.

I have no idea where do you see him imply this.

All he said is that he fixed the anathomy of the unit's paws, which is true. And you, on another side, left it untouched in your version of the sprite.

Also, looking at your art thread you don't seem to have a problem with taking credit from others' work.

Just a reminder that if you want to start an off-topic, personal conversation, remember to use the PM feature, not a public thread.

I'll be deleting this thread as soon as I know that the parties involved in the conversation know what's happened to it
...please remember that "IT'S" ALWAYS MEANS "IT IS" and "ITS" IS WHAT YOU USE TO INDICATE POSSESSION BY "IT".--scott