My other three campaigns so far are Stranger in Wesnoth; The Elf, the Dwarf and the Mage; and Add's Army.

1. For those who have played all four campaigns, which did you like most, and why? Which did you like least, and why?
2. For any or all of the campaigns, how were the difficulty levels? Did they fit with your expectations?
3. Related to this, how did the campaigns work on Hard difficulty? I freely admit that I'm better at coding than playing, so I don't test on Hard.
4. Are there any characters who you would particularly like to see again in future campaigns? Any you wouldn't?
5. Is there anything in particular that I do too much of/don't do enough of?

I'm not going to request any comments on the art, because it is improving, I assure you. "Stranger in Wesnoth" was my first serious attempt at drawing (at the age of fifty-mumble), and I've got a great deal better since, to the point where next time I update SIW it will include redraws of the worst of the art. (Vlachen. And the scene with the mermaid. I was pleased with them at the time, but they make me cringe now.)

Many thanks!
Stranger in Wesnoth - The Elf, the Dwarf and the Mage - Add's Army - Sleuth Sisters - Return of Sir Charles - Comrades in Arms - Thrugbad the Good
Top

This campaign has been great so far, but on the scenario mysterious mansion, there is no way to win. I have captured and searched everything and replayed multiple times. I cannot find "the evidence necessary to continue." Is this a bug, or am I missing something?
Top

Ah... you're missing something. When you go into the housekeeper's room, the message tells you there is a small hole in the wall. Note exactly where it tells you this hole is.

Thank you! I beat it now.

Great Scott! I thought that one was quite hard. (As I've said before, I'm better at coding than playing.) What level were you playing on?

However, the random element may have something to do with it. Every turn, each windmill has a certain chance of generating a new nightgaunt, the precise chance depending on the difficulty level. After the sixth turn, a windmill with none of its nightgaunts remaining in the game becomes inactive. It could be that the number of nightgaunts generated was below average. Do you have a rough idea how many of them there were, over how many turns?
Stranger in Wesnoth - The Elf, the Dwarf and the Mage - Add's Army - Sleuth Sisters - Return of Sir Charles - Comrades in Arms - Thrugbad the Good
Top

H'mm, right - in that case I suspect you got lucky. Or unlucky, depending on how you like to view it.

Clearer objectives would be appreciated. First scenario rat killing seems all clear, but how am I supposed to distinguish between rats from different nests? In fact I frantically ran around trying to find the ominous nests (bad reading skills) and not doing enough killing during that time made it impossible to finish later on.

I managed to lose the first scenario a few times more often by now (highest difficulty), not knowing the tribes of the rat combined with the spawning mechanism made this pretty impossible to me. Story is good, but damn rats, you could probably just add a maximum number of rats able to spawn in this scenario so it is guaranteed to be possible.
I am a Saurian Skirmisher: I'm a real pest, especially at night.
Top

I played this a short while ago, so the experience is not entirely fresh.

I liked the idea of the story, also the option to receive hints which I left on mostly out of curiosity.

The most notable problem for me was balance: I had to retry the first scenario a couple of times, either ending up killed by the rats (

, eh, not that the scorpions didn't have anything to do with that) or being unable to finish it in time. I was so prepared for something ridiculously hard. Instead I found all the rest rather easy.

The campaign doesn't mention it, but it seemed like the elvish shaman line could be just as useful like ordinary mages (and they are neutral which might also be an advantage in some cases), with a little hindrance that the druid has pierce magical attack (less useful against bones, although often the alternative to ensnare is even better against a just too strong revenant before driving a dwarvish hammer through it).
Top

There is a WML error in the last level (see attached).
Was able to complete the level though. 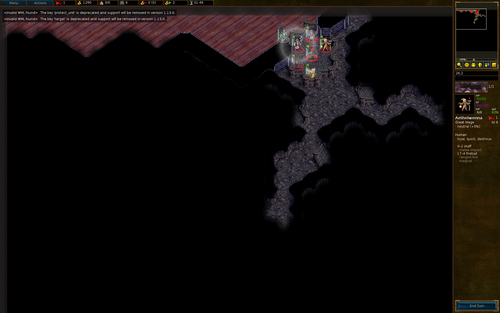 S5
There is a mistake in this scenario, you are supposed to have 30 turns, but for some reason you only get 2 turns (which is not enough).
Maybe a typo, and it's supposed to be 20?