Forum rules
Before posting critique in this forum, you must read the following thread:
Post Reply
48 posts

If you want to use the new Saurian units, download the "Saurian Pack" addon. You can find the latest version of the graphics and scripts in this repository.

As you might guess, saurians are my favorite race in Wesnoth by far. I'm surprised that there are no additional saurian sprites of similar quality to the mainline ones - or, at least, I haven't seen such sprites. That's why I decided to make a few, expanding the original unit trees and creating my own. This is actually my third attempt at pixel art (the first being a small skull for my UI and the second - scaven sprite for Wesnoth, which... was not so good), so it is pretty obvious I need some advice. I'm a programmer myself, but I find pushing pixels a quite useful skill and if I can learn it by creating something which might actually be used in a game, I'm fine with that. Yeah, enough introductions.

I want to start out with a "Saurian Enforcer" (or whatever) - a lv1 unit, wielding Aztec-inspired mace. As both augur and skirmisher have the same base, I also decided to use it - I took a little bit of both and changed the armor and weapon. Still, the hand holding the weapon doesn't seem right. I'd appreciate some some tips (on anatomy and palette) before I start animating - lesson learned after I had to delete a whole bunch of idle images after I realized that the colors need more contrast and armor needs tweaking. I attached what I have so far. 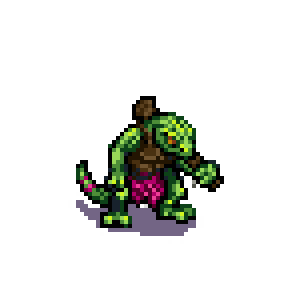 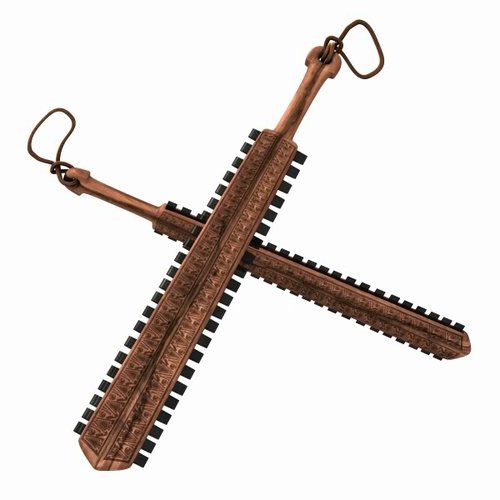 I would say the EOS - Free Saurians have quite good quality too They use mainline style. Additionally there is dark blood alliance with some saurians, but they look even better.
Justice is what happens when someone with a sword kills someone without a sword.

Well, the nicest of EOS saurian sprites are just the old skirmisher and augur trees. Dark blood alliance looks nice, but doesn't exactly fit the mainline style and misses many animations. I plan on creating all animations for my sprites, including idle frames (which I find great, personally). Anyway, for now I'd just appreciate some tips on anatomy (etc) - don't plan on creating a faction/era just yet, so I don't need other sprites. ; )
Top

I have done some Saurians for an era + campaign I wanted to create (they changed the WML while I was working on it and I was too lazy to learn the new WML, this was some years ago)

I have some old Saurian sprites which don't look much like the mainline, but you won't really want to use them. They suffer from blurry pixels, bad franking and wierd size issues since sprites have grown bigger and I used sprites from various versions of Wesnoth as my basis.
If you still want them I can send them but you'll need to do quite a bit of work on them to make them usable and I'll want the finished product too

I'll probably never finish my campain and my era, but I like the idea of my stuff developing beyond me and changing in ways I didn't envisage.

PS: agree 100% with you on Saurians.
...apparenly we can't go with it or something.
Top

Midnight_Carnival wrote: PS: agree 100% with you on Saurians.

I'd say that Aztec mace is perfect for the race, but it's not so easily identifiable in your sprite. I think that's because it's covered for the grand part by the head of the Saurian; perhaps the position of the mace could be changed to rectify that. Just my 2 cents, I once tried to learn how to draw pixel art but I failed horribly (so my opinion is light-weight, do what you want with it).

Yeah, I already noticed that. Revamped the weapon and decided to start animations - front idle is ready:

...and now I'm working on the defense (still tweaking it):

The spikes are kind of hard to get right at this weapon angle, but I've already checked and it looks pretty well in game. Still, suggestions are welcome.

Edit: as for the unit stats - I think that a saurian version of ulfserker with impact attack and slightly lower damage&health + higher speed might be a nice addition. The upgrade would be a sacred warrior, with a warpaint similar to the oracle (and maybe a weak ranged attack, to make up for the lower stats and make it a little different from the berserker). I also thought about an alternative upgrade with a lv3 tree that would drop the berserk ability - for desperate times - but I think I might expand the original trees before creating it.

I don't mind if someone wants to prepare icons/portraits for my unit(s). No pressure though. ; )
Top

I would try a lighter palette for the wood, may help the obsidian to stand out better.

I would look at your sprites in front of normal in-game background, personally I wouldn't dare working black-ish details along the outline. Or I would try to hint it by patterns in the outline, but I believe it is hard to make them stand out in game (as opposed to white background).

What are the 2 stray grey pixels near the left hand?
I am a Saurian Skirmisher: I'm a real pest, especially at night.
Top

Your attack icon is really dark. It's hard to tell what I'm looking at. I didn't know it had spikes until I zoomed in on it.
Campaigns: Dead Water,
The Founding of Borstep,
Secrets of the Ancients,
and WML Guide
Top

taptap wrote:I would look at your sprites in front of normal in-game background, personally I wouldn't dare working black-ish details along the outline. Or I would try to hint it by patterns in the outline, but I believe it is hard to make them stand out in game (as opposed to white background).

That's the kind of advice I was looking for, thanks. I've checked the sprites in game and it seemed OK at first, but after placing it on a few extreme terrains... You are right - the weapon needs tweaking, I'll change the palette. 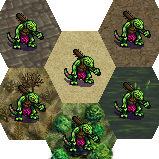 taptap wrote:What are the 2 stray grey pixels near the left hand?

A mistake I fixed along the way, some time after I showed you the sprites. They were kind of hard to see on the grayish "transparent" Gimp background.


beetlenaut wrote:Your attack icon is really dark. It's hard to tell what I'm looking at. I didn't know it had spikes until I zoomed in on it.

It was meant to be a placeholder, but now that you mention it - I made it again, a bit lighter this time:

Edit: I decided to make the spikes a little thicker and more vivid. On lighter backgrounds, dark brown (originally black) spikes are visible; on darker - their beige "outline" stands out (ignore the non-transparent sprite shadow): 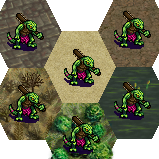 This changes the way the weapon looks on some terrains, but for now I think it's worth it. I've also tried gray, but it blends with pretty much EVERY background, so I gave up. Looking forward to reading your opinions.

Also, another take on the weapon icon:

The outline is somehow off, but 2D art is just not my cup of tea. (Yes, this is just a part of the image I posted in the first post.) I'll probably just leave it for now.
Top

Awesome! I'm not sure if it's common for the saurian bob-animations to have static head but for the enforcer I would put bit movement on the head. Or other way would be to have the weapon to change angle a bit. I think the head movement would be much more easier to implement. Currently there's a huge block in the upper part of the sprite that has no animation and it looks bit bad/lazy.
segmentation fault
EBfW, GtR, Art, Old art
Top

The macuahuitl is more of a sword than a mace. Saying that obsidian chips are razor sharp would be unfair, as obsidian can be actually far sharper than any steel razor. Giving it a damage type of impact would be crazy.

johndh wrote:The macuahuitl is more of a sword than a mace. Saying that obsidian chips are razor sharp would be unfair, as obsidian can be actually far sharper than any steel razor. Giving it a damage type of impact would be crazy.

In the same article is stated that the blunt part could be used to incapacitate a person (before the sacrifice, but it's not too strange to think that it could have been done even in battle - since quite often enemies were captured and not killed).

I don't know if it's the appropriate time and topic for the stats, but the OP could choose to give both the blade and the impact attacks to the unit, or consider it simply a club with some metal (?) parts attached which don't interfere too much with the impact damage (like the spikes in a morning mace or nails on a club).
Top

johndh wrote:The macuahuitl is more of a sword than a mace. Saying that obsidian chips are razor sharp would be unfair, as obsidian can be actually far sharper than any steel razor. Giving it a damage type of impact would be crazy.

European maces of the morningstar variety had sharp spikes, should these have piercing attacks?

I think the guy who draws the sprite gets to tell us what type of attack the unit has provided it is the same guy who writes the code.

Actually there were a number of early swords produced in scanadnavian countries which were made of hard wood with obsidian edges. Personally I like the idea of a glass sword provided the glass is strong enough.
...apparenly we can't go with it or something.
Top

Midnight_Carnival wrote: European maces of the morningstar variety had sharp spikes, should these have piercing attacks?

Those still act like clubs, working with blunt force trauma -- breaking, crushing, rupturing -- by mass and brute force, rather than by poking the target to death like a spear or an arrow.

A macuahuitl works by being extremely sharp and slicing through flesh, like a machete. Another reason why impact damage wouldn't make sense for a macuahuitl is from a gameplay perspective: impact damage is good against armor, whereas obsidian blades shatter on impact with hard surfaces.

Regarding the saurian sprite, impact damage makes sense if it's a spiked club, but a spiked club is a very different weapon from a macuahuitl.
It's spelled "definitely", not "definately". "Defiantly" is a different word entirely.
Top

Love this hope to see more. You mentioned skaven, look at warhammer fantasy's skinks? Or even just the lizardmen for more ideas. Would love to see/help if you wanted. O.o just looked up the WHF Lizardmen and found this!
http://www.llamaserver.net/globu/Dom3_M ... ns_MA.html
its a fairly old bunch of sprites but could probably be reworked
mid way down you see a few nice ones
Top
Post Reply
48 posts