I am announcing another small scenario called "Lazersquad" featuring futuristic ranged weapons, this is based on the old 1980s games by Julian Gollop such as Rebelstar, XCOM and Laser Squad, this follows on from my other mini scenario "Chaoz battle of the wizards" based on another 80s series of games, the Chaos series. This scenario also has some features seen in my other maintained scenario Conquest+ Space (e.g. the Space Marine style units).

* The map consists of enclosed rooms as seen in the early Rebelstar and similar games, adding an element of close quarters combat and tactics.

* You can capture villages for +gold, if you place a unit on a village and right-click you can buy upgrades (Outpost Store) such as instant healing or weapon upgrades

* You can right click any village you own to recruit "Mercenaries", weaker units resembling the squad but with less weaponry, these can also be upgraded using the Outpost Store

* Victory conditions are to defeat other squad members, you lose if all your squad members die, regardless if you have mercenaries still on the battlefield

I'll post updates to this thread, initial tests in the lobby generated a fair bit of interest so I hope folks enjoy this scenario. I'll be looking to make some more mini scenarios soon based on old 80s games. 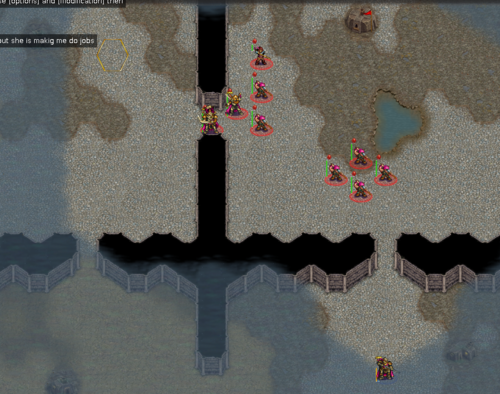 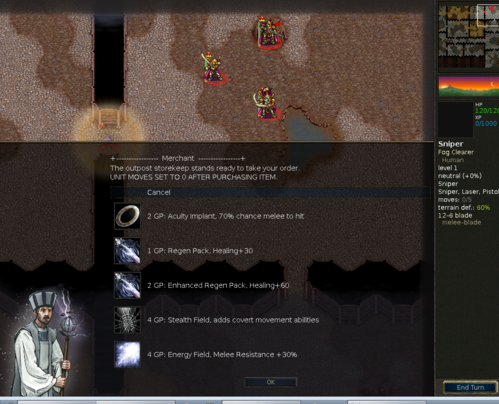 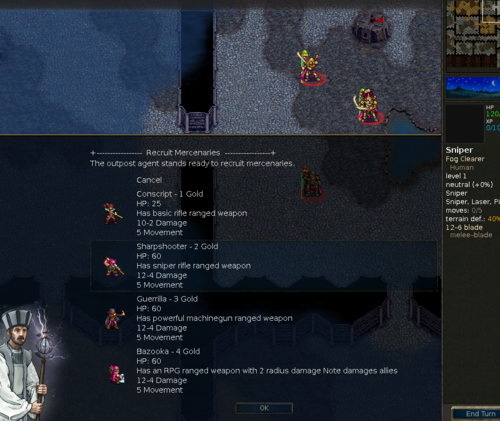 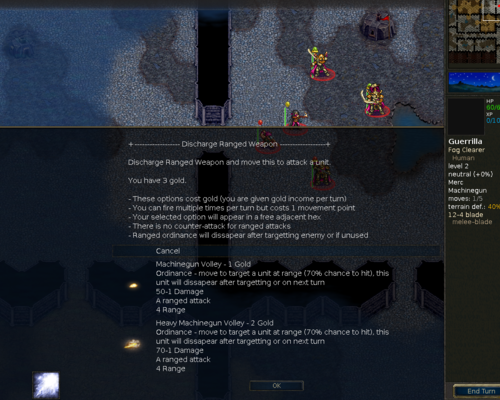 Some of bugs i found and my suggestions:

At the moment ammo spawn automatically at left-top hex, this gives bonus range to south/east units while giving less range north/west units.
Ammo can also spawn in walls this way.

100% hit chance for pistol is too strong early, i would suggest to nerf its range and hit chance to 90%.

Ammo have FOV, i don't think players should be able to scout map with ammo.

Grunt/Commander medium ammo is too weak, 2$ is too much for mere 40dmg compared to "weak" mercenaries being able to instakill other mercs with 60dmg bullets.

Acully implant(Meele "magic") is useless except for Commander and sometimes Grunt, price for mercs could be 1$ and would give 5/10hp boost(This way Guirella mercenaries will have reason to use Heavy machinegun volley, same for Heavy laser used by Troops).

Fixed a missing entry way in the Dark Fortress map
Added 3 random cave maps, 6, 4, and 2 player, they all use the same random cave wml so to make the 4 & 2 player maps smaller I will need to configure these in a lot of detail in the future but for now they are a proof of concept that it's possible to use such random maps in a scenario, there are similar land-based random maps in my "Chaoz battle of the wizards" pack.
Maintainer of Conquest (Original Gameplay), Conquest+, Conquest+ Space/Ranged, Chaoz Battle of the Wizards, Lazersquad (squad game), WesCraft (building MP game)
Top

Added a fix so projectiles don't appear on walls, neither will the projectile (ranged weapon) menu show up when there is only 1 free hex which is an impassable terrain hex, neither will projectiles flip across walls to a free hex, this is done by removing normal checks for passability and using a custom approach where on right clicking intro a projectile menu fake fog clearer units appear adjacent to the firing unit but only on impassable hexes, these are killed when the menu is cancelled or shot is fired

increased auto income from 0 to 5, I felt the income was too crippling and noone could use ranged weapons properly

Added some new maps, "annexe" a smaller version of "fortress" for 4 players and a jungle map with a mountain cave complex "Mountain of the Ancients

Laughing mercenaries cause insanity among some players.
Top

Engineer - can build structures, based on conquest+ builder, such as forcefield and "radar" dish style unit (beacon) and machinegun turret, structures can't move or attack but have high HP and can defend if attacked in melee combat with reasobly high attack/dam for their cost

The "Demolition Man" does x6 melee dam vs structures, based on the siege units from Conquest+

A medic which does +15 hp healing for adjacent units

Zooks deal 100dmg instead of 80 to structures as well.

Alternate scenarios with -2 base income and 2$/villa would be nice.
Top

Fixed defeat_condition=no_leader_left, now hopefully a side is removed when last squad member is killed

Stubborn mercs still refuse to go home if the battle is lost.
Top

Just add die event when you want to get rid of them.
Justice is what happens when someone with a sword kills someone without a sword.

thebadman wrote:Zooks deal 100dmg instead of 80 to structures as well.

Alternate scenarios with -2 base income and 2$/villa would be nice.

Looks like the code dealing with the radius damage is out of sync with the damage reported in the unit/ recruit list I'll have a look at this later today.

I can certainly unlock the income setting so the host/joining players can decide their income level to play.

I'm tempted to raise the turret's HP slightly, bear in mind it already has mich higher hp than the average unit, it is after all a defensive structure like a fortification, as well as being able to "fire" the machine gun.

I am tempted also to remove % failure from all ranged weapons in this mod, as this makes some units less worth bothering with, I for example tended to just buy sharpshooters as I know their shot always works, making the geurillla and others redundant. If I make all ranged 100% I'll need to tweak all shots to compensate so they are still balanced for the cost, so an increase from 70 to 100 might be a loss of 15 damage, an increase of 80-100 might be a loss of 10 damage, an increase from 90-100 might be a decrease of 5 damage.

I also want to add at least one more coop map and tweak this mode a little at the moment its almost completely untested for difficulty etc. In another version, I might add a dreadnaught style AI with much less units which are a lot harder to kill like x2 the stats of a commander, something like 600Hp and 88-8 melee damage.

I'm really not sure why the mercs are not dying when all leaders are killed, I will put in a backup event which runs on end of turn or something & see if this fixes it, if it's still broken I'll post the WML to the WML forum thread to see if anyone like Ravana has any ideas.

Another job I want to sort is to change the icons for lazers which I think look like fireballs, they should look more futuristic. I also think the laser shots need to be cheaper.

I also think it might be possible to make a separate pack which can be played in single player mode with missions, this was the gameplay of the original Rebelstar game, I would need to do some work to see if I can automate a squad AI and their ranged weapons though, this would then replace the mutliplayer only version. This project might have to wait because I also want to make some other new mods.
Last edited by Gwledig on September 1st, 2014, 2:18 pm, edited 1 time in total.
Maintainer of Conquest (Original Gameplay), Conquest+, Conquest+ Space/Ranged, Chaoz Battle of the Wizards, Lazersquad (squad game), WesCraft (building MP game)
Top
Post Reply
39 posts