Hi, I like strategy games and programming and I am also a member of the "Imperialism remake project" (obviously there isn't a good name for it yet).
I would like to introduce you to it with a few words:

Imperialism 1 and 2 were turn based strategic games with tactical combat from the late 90s produced by SSI/Frog City which are now defunct. The player was leading a European nation (or fantasy nation) and had to win the struggle of about seven "major powers" and gain world dominance ultimately. For this military, diplomacy but above all industry had to be developed with ever colliding priorities. But using these things all wisely together would give a path to imperialistic victory. Both games were quite well known at their time but become kind of forgotten, also because the rights are scattered and they can't be bought anymore and no successor came out.

So we started an open source remake with basically the same structure as BfW bringing artists, supporters and programmers together. We want to develop our own vision of what Imperialism should have been.
Of course we are searching for interested volunteers, whether they just discuss the game or contribute more substantial things. Doesn't matter.

We have already a very simple, first version out for download featuring a simple terrain editor. The center of the community is the forum.

Also I can answer any question here.
Top

Original is no longer abandonware

Above I said that the rights were scattered but it seems I was wrong because surprisingly it has been re-published today by GOG.com/Ubisoft. It is supposed to include the soundtrack as extra download and able to connect for Multiplayer-games over TCP/IP. This is a bit unexpected for me but really good news. People can play it again and I hope the remake also gets more fans.

If you play it again, there is a nice wiki about it. Link
Top

Grown up quite a bit

Now it is four months since the first release and our team has grown and we have a new version of the Imperialism remake. We also have some terrain tiles artwork that we distribute. You can find it all at the download page.

Mainly the map is improved with borders, provinces, nations and rivers. Now we will focus on network and gameplay. I attached a screenshot so people can see how it looks like. 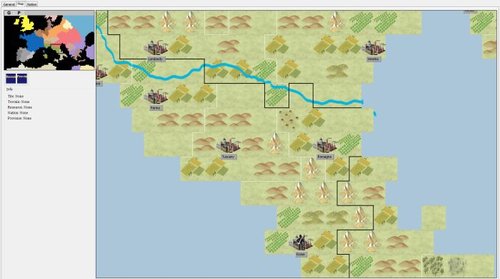 Naming of the project

Although I am kind of the lonely spammer of this topic I hope I may allowed to continue updates from time to time. This time it's about the naming process. If you want you can propose a name in this thread. We want something that is more than just "remake" and captures the spirit of the era.

Also we started an intense discussion on game mechanics because we realized that strategy are so complex - you should have a good idea how they work before actually starting.
Top

This sounds great! I loved that game back in the day.
Wyrmsun (RTS Game)
Top

Hey is this still active? This is awesome! Imperialism 1 and 2 were both fantastic games, and any remake that is half as good would be worth playing.
Top

The last GitHub commit was 3 years ago... so apparently the project has gone bust

@HonzaCZ: Well, you know, the people of the world will only stand for imperialism for so long! Down with the evil empires etc.
Top
Post Reply
9 posts • Page 1 of 1