Drums of War Campaign Thread
The Drums of War is a short 6 scenario campaign for beginner to intermediate level players.
Feel free to leave comments, feedback, or debug info below. 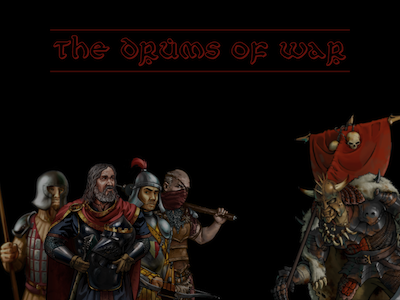 Description: For five years the kingdom of Anduria has been at war. The orc warlord, Sreng, has pushed the realm to its limits. King Ethylin-Mor gathers the heroes of Anduria for one last effort to rid the land of this plague once and for all. If Anduria is to survive, Sreng must die.

Blarglog
Version 2.0.3 Uploaded 2.7.18
+ Streamlined campaign so it is a much smaller upload.
+ Changed maps so its easier for human units to navigate.
+ Fixed Ethynwy's portrait so it stays the same when she levels up.
+ Minor dialogue adjustments which hopefully won't mess up the Russian language translation.

Version 1.9.1 Uploaded 5/25/13
+ Made changes to scenarios 3 & 4 to smooth the flow of action
+ Lessened difficulty of scenario 4 on Hard
+ Fixed Ethynwy's winged portrait, which wasn't manifesting

Version 1.1.0 Uploaded 1/30/13
+ Debugged so campaign will load once more
+ All scenarios play tested
+ There is one final scenario planned, but campaign is completely playable as-is

On the 2nd scenario after the goblins turns I'm getting a lot of delay switching back to my turn. Possible bug?
Top

Are you playing on Hard?
Wesnoth stole my summer . . . again.
Top

* New scenario
* Units rebalanced
* Advancement trees expanded
* Story expanded to feature the elves more prominently
* Maps enhanced
* Added some nice UMC music
* Added some interesting UMC terrains
* And a bunch of back-end stuff that isn't really of interest to anyone but that makes the campaign funner and more intersting.

This will likely be the last expansion of this campaign as I have other projects that I've been putting off to complete this. Hope those who play it like it.

Admins: I will be checking in here periodically. Please do not put my campaign into the abandoned bin without attempting to contact me.

Thanks to everyone who helped me on this.

+ Made changes to scenarios 3 & 4 to smooth the flow of action
+ Lessened difficulty of scenario 4 on Hard
+ Fixed Ethynwy's winged portrait, which wasn't manifesting

This really is the last version
I mean it
Seriously

Just a quick note: I am currently working on another Wesnoth campaign, so the Drums of War sequel is being delayed until probably sometime this Spring.
Wesnoth stole my summer . . . again.
Top

Although it seems almost superfluous on the eve of 1.12, here's the new version. Changes made across the board to pretty much every scenario. Scenario 4, Summer Isle has been completely redesigned. Fixed bugs that were likely preventing the campaign from loading.

Beware the goblins. They suck.

When we have a 1.12 actual, I'll review the changes and create a version for that.
Wesnoth stole my summer . . . again.
Top

Scenario 2: for me there was a lot of delay between each enemy move (I'm playing the latest version of the campaign - maybe it's my Wesnoth version)

Scenario 3: This scenario was extremely easy since I guess I got lucky and the trolls and spiders basically wiped each other out. This applies to the whole campaign, but it would be really nice if the elvish leader who joins you had the Quick trait, otherwise he lags behind in the cave/final scenario.

I really liked scenario 4 (Summer Isle) - very challenging and tense, like the siege of the Kalian from Legend of Wesmere. Woses are really good here for their regeneration.

Last scenario - I didn't like how almost the entire map is frozen and you have to travel a very large distance to get to the northern keep. A lot of your units have 5 movement points so moving them two hexes at a time all the way north is tedious. Which makes gryphons extremely useful on this map, but you can't recruit them anymore (is this intentional?), only recall (and I only had one). I also felt like the large map/bad terrain made this scenario very easy since the enemy troops reach you only a couple units a time and you can just pick them off.

i really liked how you modified the human units to include new specials like poison and nightstalk. It was fun to try and use all the different types of units to see what they leveled into.

Thanks for you hard work on this campaign. Looking forward to the sequel! -Inky
Screenshot playthroughs: Let's Play Dead Water, Let's Play Invasion from the Unknown and Let's Play After the Storm
Top

Thanks Inky. Your comments have given me a lot of things to look at for improvement when I get to the 1.12 version. You know, that delay in scenario 2 has been noticed by myself and others who've played the campaign. I reviewed the code pretty rigorously for the latest version and I cannot see what is causing it.
Wesnoth stole my summer . . . again.
Top