Since this era has been changed so extensively I'm going to post a new overview.

Firstly, the point of this era is to give the player choices. In some RPGs the only decision you get to make in your turn is whether to attack or not.

In this era, players can choose their character's class, race, traits, portrait and gender - as well as boosting their stats with a bunch of custom abilities and perks. You also can adopt various stances to temporarily tweak your unit. In addition, there is an inventory system allowing you use or give items, drink potions and equip weapons. Meanwhile, talents allow you to make medicinal balms, sharpen weapons, concoct potions, conjure creatures, tame animals, set traps or pickpocket gold from your team-mates. You can even send in-character dialogue messages to other players - perhaps to brag about your latest theft.

Of course, not all these options are available at once. Character advancement partially mimics the mainline unit tree, and stats never get to SX levels, so no character ever gets complacent about charging a pack of Yetis.

Here is some more detailed info:

Despite this initial choice, a character can progress, at a cost, in other classes - giving players the option of specialising or being a jack of all trades.

Your choice of race tweaks some stats, as well as determining resistances and movetype.

Each character must choose a talent and a defect. These are also related to class.
Defects are passive and come into play automatically; whereas talents are interactive and give the player special right-click options.

Warrior Talents
Weaponcraft - allows you to use raw materials to improve melee weapons.
Rouser - allows you to give a move bonus to an ally.
Rider - gives you a free horse unit which you can mount and dismount at will.

Naïve - You start with -5 character points.
Selfish - You cannot give or be given items.
Clubfoot - You have -1 movement and cannot use the run stance.
Liminal - You only fight at full strength at dawn and dusk.
Cowardly - You fight worse in melee combat when wounded.
Gambler - You start with -100 gold and negative income.
Diseased - Every turn there is a 15% chance you'll be poisoned.
Stupid - Your max XP is increased by 15%.
Psycho - When you attack there's a 10% chance you'll go bezerk.
Unlucky - You are 20% more likely to be dealt critical hits.

Each player starts with 10 Character Points to spend on improving their character - and they get 10 more when they AMLA. These are used to gain perks, abilities, weapon specials and stances. They can also be spent to advance to the next level of any class. Advancing a class doesn't boost any stats, it simply allows a new set of options.

Stances apply temporary bonuses and penalties which are reversed when the stance is changed. They basically allow you to change your stats to suit the situation: do you sacrifice defence for more attacks? Or do lose speed in favour of more damage? Hopefully there will not always be a correct way - it's up to the player's style. In addition, the run stance is handy for quickly crossing parts of a map with not many enemies.

Players can access their inventory by right-clicking on their unit. Certain items in the inventory have one use (click on a potion, for instance, and you drink it), others have on/off options (lantern, snow shoes, etc). Many of the items are raw materials (clay, leaves, rocks, slime, etc). These can be put to various uses by characters' talents.

The inventory screen also allows you to equip different weapons. There are currently 25 possible weapons, though in an average game you'll probably only ever own one or two. For the sake of remaining faithful to the unit sprites I have made it so that characters can only equip variations of their starting weapon. For example, a character that begins the game with a sword can only equip other types of swords (Salamander Blade, Holy Sword, etc.)

Likewise, a unit can only wear certain types of armour. For instance, a magician can only wear cloaks and tabards, while warriors can wear either plate armour or chainmail.

All maps will have various items scattered around it, which players can pick up by simply moving on to the hex. Other items can be bought in shops or must be placed by the scenario designer. In addition, some items will be placed on the map when certain creatures are killed (for instance, slay a wolf and you can pick up a fang).

- Characters start with a small selection of random items (based on their race, class and talent)
- You can also give items and gold to adjacent players by right-clicking on them.
- When a character dies, all their stuff gets dumped on the ground allowing other players to pick it up.

EDIT: This post has been edited with the details of the latest version.

Hmm, that's it for now. Best you just jump in and play it. It's not quite as confusing as it seems - I only really put all this here for reference.

Thanks to all the artists, especially Jetryl, for their fabulous icons - and thanks again to sapient for his wml help.

Go forth and play your role.

Thank you a lot Bob!
Top

I love the stance idea, but I must say "Experienced Vagabond" is the funniest class name I ever heard of.

"I am a just a vagabond named Jubei Kibagami"

I personally really like the conceptual idea of having to choose a negative trait. Stupid seems over(under)powered and I foresee myself taking that negative ability every time. Its not a significant penalty when compared to the others.

Psycho is really evil though

I like this era, even though I don't play RPGs much, it would be nice to have some class other than warrior that dwarves could be.

EDIT: When trying this out I had trouble because I could not exit the help menu. I clicked OK while done was selected, and it did not exit, I was forced to force quit.
"There are two kinds of old men in the world. The kind who didn't go to war and who say that they should have lived fast died young and left a handsome corpse and the old men who did go to war and who say that there is no such thing as a handsome corpse."
Top

Bug: If you open the help context window, you cannot leave it.
Request: Add a tab for concoction/herbalism recipies already discovered. It would be helpful for longer games so that somone can remember what does what.
Top

Bug: Dwarf's do not gain an option for a ranged attack when taking a level of ranger.

Bug: The "loaner" special breaks the attack animation of a ranger. (at least for the elven ranger). This breaking of the animation only occurs when the special is active. (I.E. Normal shots when next to allies, broken graphics when attacking alone.)
Top

Jami wrote:Bug: If you open the help context window, you cannot leave it.

Yes, I experienced this when I was an observer.

Jami wrote:Bug: Dwarf's do not gain an option for a ranged attack when taking a level of ranger.

Bug: The "loaner" special breaks the attack animation of a ranger. (at least for the elven ranger). This breaking of the animation only occurs when the special is active. (I.E. Normal shots when next to allies, broken graphics when attacking alone.)

What do you mean by the animation being broken? What happens exactly?

p.s. The dwarf steelclad gets a secondary melee weapon option instead of a ranged weapon. think it should be changed?
My current projects:
MP pirate campaign: The Altaz Mariners
RPG sequel: Return to Trent
MP stealth campaign: Den of Thieves
Top

I believe the dwarvish lord has a weak ranged (throwing hammers or something?). You could also go the thunderer route...
Top

This era is really cool, however it would be really nice if you fixed that bad help-menu-bug (you can access it but never leave it again; must exit Wesnoth to escape).
Top

I'm not sure what the cause of this was, but the last time I tried this era solitare with 5 characters after I ended a persons turn there was about a 10 second lag between turns. This made it annoying because you were olny moving one unit per turn and having to wait about 10 seconds for the next turn quickly got annoying. If you know the cause of this I'd greatly appriciate if you could fix it.
"There are two kinds of old men in the world. The kind who didn't go to war and who say that they should have lived fast died young and left a handsome corpse and the old men who did go to war and who say that there is no such thing as a handsome corpse."
Top

Velensk wrote:I'm not sure what the cause of this was, but the last time I tried this era solitare with 5 characters after I ended a persons turn there was about a 10 second lag between turns. This made it annoying because you were olny moving one unit per turn and having to wait about 10 seconds for the next turn quickly got annoying. If you know the cause of this I'd greatly appriciate if you could fix it.

This is really well done!

It's much more accessible than FoT RPG era - pretty much self-explanatory, well laid-out menues, and so on.

I think the traits are unnecessary - it's a lot to read in the beginning when making the choice, and has so far-ranging consequences that I could imagine a player to ponder for 5 minutes before making his choice (if he doesn't know the era). That's a lot in an MP that's just starting, and you can't get other's advice while in the dialogue or revert your choice later on. Also they are very anti-heroic.

It's really hard to play with these characters, though. I think it should be easier to get a basic melee attack for rangers or magicians - it's tough to survive with the DA effect of not having a weak melee attack. A magician must buy a warrior level and the weapon skill for 10 points total just to get a weak melee attack...

One more thing I find slightly confusing is that all the damage is standardized - I mean all weapons seem to deal similar damage - it only depends on the class. I would like to see weapon-based damage and attacks that are modified by the skills. Also I think it would be good if one could recreate characters with attacks similar to the existing units - they tend to lean to have less damage per attack but a high number of attacks at the moment.

All in all I feel that improving your character should modify either the total damage, or the way it splits up into number of attacks, so that multiplicative synergies are eliminated. Many custom scenarios with unit improvement have this min-maxing aspect as a feature (and I bet many players like it in the same way that people shop for bargains IRL), but I don't think it's a hallmark of a good design.

That makes me think that you don't plan to have players gain new attacks by finding a magic weapon, for instance?

How can a ranger increase bow damage without becoming a mage? That seemed odd.

There's still a lot I haven't tried out yet - but this closely resembles my ideas of an ideal RPG era.

EDIT: oh, one of my vagabonds had this icon on top of him - what does it mean? 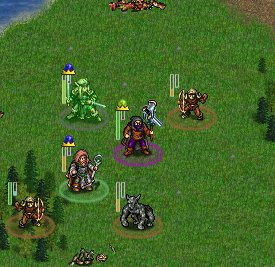