Hi. Glad to see this mod is still in active development. I really enjoyed playing both the era and the campaign. Got this error while playing Runemasters on the most recent steam version of the game and the mod. If I recall it right, it was the T1 berserker unit triggering it, but I might well be mistaking. 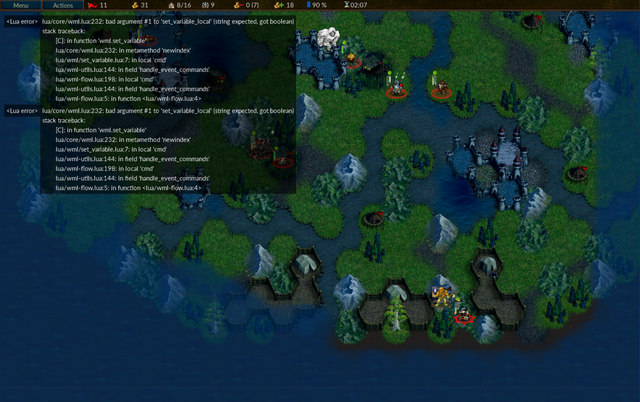 On a side note, I've been wondering how much has two third of units having magic/precise attacks devalued terrain bonuses and positional warfare in practice? Is it still a significant factor in MP or is it less important than in vanilla?
Top

Hi, just out of pure curiosity

Why not 10? Like, resistances that are not multiples of 10 or 5 are very rare in Wesnoth eras
Co-founder and current maintainer of IsarFoundation, Afterlife Rated and overall Wesnoth Autohost Project
Top

Why not 10? Like, resistances that are not multiples of 10 or 5 are very rare in Wesnoth eras

Well, it's about how wesnoth rounds damage (according to IPS 6% resistance reduces a 10-damage attack's damage by 1 while 5% won't), IPS seems to like focusing on very specific interactions, for better or worse.
My active add-ons: The Great Steppe Era,XP Bank,Alliances Mod,Pestilence,GSE + EoMa,Ogre Crusaders
My inactive add-ons: Tale of Alan (1.12),The Golden Age (1.12/1.13) (all add-ons no longer supported)
Co-creator of Era of Magic
Top

Why not 10? Like, resistances that are not multiples of 10 or 5 are very rare in Wesnoth eras

Well, as ForestDragon said, to work for more particular cases (like how rounding down one damage point at 8, 9 or 10 dmg). While 6% fire resistance looks weird, 10% is way too high for an unit that can level up almost as fast as Default swordsman to lv3. Kharosian Impaler and Javalineer is a curious line that is inspired by more defaultish criteria and being a good unit to get very early in lv3 in survival maps as it's strong enough but maybe not that much to over-kill a lv1 unit with all hits.

Other exceptions of rare 6-8% ish values are in Lv1 - Lv2 summoners and Elementalists and I can't remember that much if other cases.

Talking about RPG issues, well, it's not possible balancing lv3 and lv4 cyclops at having ONE BRUTAL strong magical attack, the nerf will not be defenetively enough to stop this unit to be TOP Damage Carry in almost any existing RPG mode or even Survivals with upgrades. So there will be more nerf.

And about the weird message error, it usually occurs when it's opponent's turn and there is an STUNED unit, it's just an ugly and inofensive bug.

Some other RPG adjustments

Cyclops Skeleton and all Advancements
- Magical Ressistance standarization to 0% arcane and 20% to cold/Fire
Hard damage DPS, giving other mages to have a chance againist this unit because of lowered magical ressistances.
This includes necromancer and all to lv4.

Omen and all Advancement
- All-Around will be replaced to +Triple-strike
- No-Counter-attack will be replaced to +Dread (33% less damage taken)
- Lv3 and Lv4 ressistances will be the same of Lv2
- Sword (Blade) +Skilled will be adjusted to +Marksman in Lv3 and Lv4
- Sword (pierce) +Precision is adjusted to +Skilled in Lv3 and Lv4
- Remove AwE on all advancements, because of being somewhat game broken in RPG.
Special's +Dread code already exists in ageless era.

Dreadnought
- Ranged (Spear throw) will not have +Skilled anymore.

Prophet of Light
- Blinding Light +Magical will be replaced to +Magical(offensive) in RPG.


This is another RPG update that rebalances RPG for a better.
Creator of: Deathmatch new in 1.12 server.
Co-creator of: Era of Magic in 1.16 server
Developer of: Empires in 1.12 server, Ageless Era in 1.10 to 1.16 servers (but innactive recently)
Try My winning Orocia Guide
Top

Kowalski88 wrote: ↑August 1st, 2022, 9:19 am Got this error while playing Runemasters on the most recent steam version of the game and the mod. If I recall it right, it was the T1 berserker unit triggering it, but I might well be mistaking.

@Kowalski: Thanks for reporting. Do you still have the replay of that match? I'd like to see it.

IPS wrote: ↑August 3rd, 2022, 12:55 am And about the weird message error, it usually occurs when it's opponent's turn and there is an STUNED unit, it's just an ugly and inofensive bug.

Well, a bug is a bug and should be fixed, even if it only clutters the in-game chat.
Creator of Era of Magic
Creator of To Lands Unknown
Creator of Visual Map-Pack
Co-creator of XVII Century Project : Eastern Europe at War (EEaW)
Top

I added wesnoth.message("set var ".. tostring(key) .. " to " .. tostring(value)) before line 232, but did not figure out the condition to see it happen.
Justice is what happens when someone with a sword kills someone without a sword.

This update, similarly to 3.9.3, delivers another portion of RPG tweaks (by IPS) + some bugfixes.

Hi there, still viewing some aspects of lv2 and lv3 balancing pricing, it's actually quite hard to find stuff to improve their balance. But I guess I'm still finding some stuff and observations.

Still viewing certain units that are naturally weak to impact attacks to see if there was something worth to derease its price, but, seems that not much intervention can be done actually, appart of other few things.

Mystic Warriors and Sky Guardians don't need of any re-pricement because of the new weapon special in their melee, which even if not that strong, but in more specific situations it's quite worth it having it. Golem also don't need reprice because it really deals huge damage for a cost of 37g. Cosmic Eye some time ago got more impact weakness, which synergyzes with the fact of that many new units have high accuracy impact attacks. Master of Air used to be underpriced, but as more units got high acccuracy impact ranged attacks, this unit might be less strong in large randomly generated maps.

So , on Sky Kingdom's side, I would only decrease melee damage from lv3 Master mage from 9-2 to 8-2 and renaming it to "magic touch" instead of "light touch".

About another concern, hydras feel somewhat fragible in high leveled matches, this is mostly because of the fact that their base regen of +8 is more valuable in lower level but will not scale that much higher as unit grows up unlikely the damage it may take from stronger enemies and needing of more time to recover. Might not be a bad idea in increasing impact ressistance on higher level ups? will proposse.

Stridding machine and lv2 usually gives problems for tharis faction because of not having high fire/impact attacks, even considering that recently tharis got the Pain Mistress unit which at lv3 gives a significant impact melee boost in larger maps, still, will not fix this unit's issues in large maps ... but this unit is frequently abused in survival scenarios and is quite strong unit in Orocia gameplay, but I still think that the previous nerf of this unit was quite strong this time ... but needed. In my test, golem is a faster unit and usually will have the first engagement againist hydras, meaning that golem is not "that much countered" by hydra which can favour me to consider this buff.

About kharos, new waves of high accuracy impact ranged units impairs quite much the build that consisted in Silver/Gold warriors, that if strong Kharos don't have much options to consider in large maps, making them quite less versatile at large maps. I see no problem giving War Banners some more impact ressistance. Same can say of Lv3 recruiter.

About Summoners, people aren't considering that often Water Avatars or Water gods in their builds in survivals, they quite preffer spamming air elemtals/avatars or going for more regen stuff. Not talking about ressults, but I can consider of giving more impact res to lv2 and lv3 water avatar/gods.


These new corrections are to protect some factional balance from new addition of high accuracy impact ranged. Will be looking later if anything else needs a slight modification, but this will be all for now.
Creator of: Deathmatch new in 1.12 server.
Co-creator of: Era of Magic in 1.16 server
Developer of: Empires in 1.12 server, Ageless Era in 1.10 to 1.16 servers (but innactive recently)
Try My winning Orocia Guide
Top

Off-topic, found an issue with the Skill Circle of Susceptibility, screenshot talks by itself. While observing an Ageless Era game

It's known that units that debuffes ressistances troll so hard units that naturally depend on steadfast, but double fire weakness? lol , that needs to be reviewed 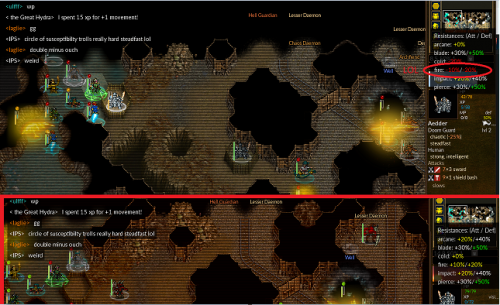 I believe it is engine limitation. It will be most drastic if you find unit with 1% base resist.
Justice is what happens when someone with a sword kills someone without a sword.