I disagree that GE is lacking an AI thus resulting in lack of pick up from newer players, the tutorial does a good job of introducing the mechanisms involved. The real issue is after the tutorial you are thrown into a map like Beta where you now have a lot of decisions to make and it takes 2 hours to realise you screwed up the early game so hard it was over in the first 20 minutes. GE needs the isar equivalent, a super small quick to play map that has reduced decision making early on and has you interacting with your opponent(s) within the first couple of turns. This would give new players a fast feedback loop to learn the strategy of GE quickly.

The big issue I have with GE and why I don't really enjoy playing that much anymore is that it is very unbalanced with regards to choice in strategy. In its current state you don't really have much choice as far as overall strategy goes. Economy (food,gold,research) is just too strong there are no threats to it at all. You are basically forced to play this single player min-max economy puzzle for hours until you hit a certain point and then you go and spam ships at your opponent and you find out who was better at the economy puzzle. You are discouraged from doing anything other than this, if you spend gold on ships, your opponent just defensively and reactionary spends gold on ships so that neither has superior numbers and then continues the puzzle and you are punished because you spent a turn buying ships and not increasing your economy. Invasions don't stop this either as it is much the same story you can see the entire map very quickly so you know where transport ships are so can react and respond.

I think the proposed changes to invasions may help with this but its still not enough, I think that having an enemy ship in orbit around a planet should weaken that planets economy somehow. This would encourage splitting up your ships and try and sneak them around adding to a more dynamic play rather than the ball of ships surrounding the flagship style that we see now. It would also go a long way to detering the economic puzzle problem giving meaningful player interactions.

I would welcome a change to how science is done anything that makes the tech tree easier/clearer to reason about would be nice. Due to the economy puzzle problem you really don't have much choice in research anyway not getting the economy boosting research early is a losing move right now, new players not knowing this results in the 2 hour game where you find out you lost in the first 3 turns issue.
Top

I think I should post my replay vs CP.

Btw to conclude whether the economy rush is the only valid style would require more games and on smaller maps, bigger maps I think favor the style greatly.

I would really love to see this ported 1.14. It does not seem to be available on the 1.14 download site.

Please and Thank you
Top

Please and Thank you

Not sure if this is official, but if you copy the folder with the addon from a 1.12 install (you can find the addon path somewhere in preferences, I think) and paste it in the 1.14 install (addon path in the lower left corner; click on the i), it'll work. All you have to do is go to the file planet_upgrades.cfg (in the addon folder/Galactic Empires/files) and change "variable=planet" to "variable=stored unit" the one place it appears in the file (in a tag marked by [unstore_unit]).
Top

I have also found that if you download the addon for for 1.13 from http://files.wesnoth.org/addons/1.13/Ga ... es.tar.bz2 That also appears to work
Top

Hey Aisha & rcoit. I've put the latest version of Galactic Empires on the add-on server for 1.14. It's the same as the last update for 1.13, but that had lots of changes that you might not have seen before. Any problems let me know.
My current projects:
MP pirate campaign: The Altaz Mariners
RPG sequel: Return to Trent
MP stealth campaign: Den of Thieves
Top

Getting the following error after first installing the add-on and on first time joining multiplayer.


The following add-on had errors and could not be loaded:
/home/kipples/.local/share/wesnoth/1.14/data/add-ons/Galactic_Empires/_main.cfg

Please report this to the author or maintainer of this add-on.

Thanks Kipples. You can ignore that message (or you can simply delete the file: "add-ons/Galactic_Empires/scenarios/1p_GE_Test.cfg"). I just forgot to remove my test scenario before uploading it. It's removed in the latest version.
My current projects:
MP pirate campaign: The Altaz Mariners
RPG sequel: Return to Trent
MP stealth campaign: Den of Thieves
Top

The map is a lot smaller than those that currently exist I did this to try and downplay the economy focus playstyles that I feel are forced upon you with the larger maps. The map should also have the effect of reducing the overall play time.

I did a brief pass with regards to balance focusing on preventing P1 rushes being too strong, hoping to get some feedback regarding balance in general but especially regarding P1 rushing. 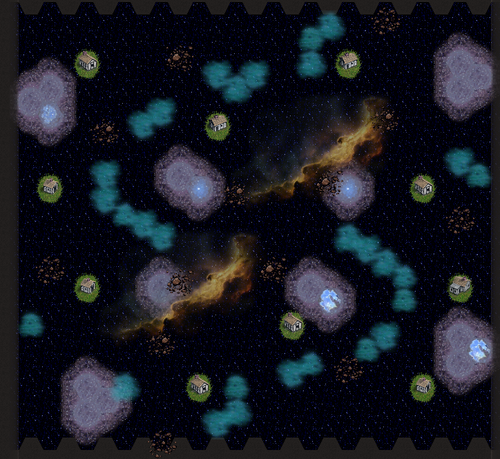 Nice, finally one of my favorite mods have been added to the 1.14 server!

And with a new map to boot coutesy of Kipples

Attached are a couple of test games for version 1 of the map (I understand our test resulted in further tweaks, await version 2 ok?)

I include the 1st one because I was hit with new map possibilities for map making: Warp Planets / Tiles. So you could place it such that if you beam down on a planet, you beam down on a completely different one on the other side of the map (call it, Quantum Entangled Planets?) / or have multiple planets warp into a super planet. There is also the idea of tiles in certain planets having stargate tiles that lead to other planets.

This new map is a much needed "fast" 1 v 1 map with a much longer early game. We ended a game by turn 16 guys, with an invasion by turn 10ish!

Some notes:
-Does driller salvage need to be nerfed to 6 - 8 per g?
-Could Flagship have a cancel mechanism so that stoned flagships are not out of commission the entire game (I mean, flagship is just a construct after all). Perhaps have a re-assignment penalty of 1 or 2 turns. This is devastating enough without counting the transportation time for new flagship to arrive.
-This map doesn't have the customizable tech/ critter/ artifact options coz Kipples didn't want to mess with the code too much. Would be nice for customizability like in other GE maps.

P.S. Is there a changelog for the changes? I was intrigued by the Empire Options (the ally sharing stuff for example) I wonder what other directions you want to put that menu through?

As requested, here is the changelog for the latest version of Galactic Empires. I've incorporated many of the changes/patches and some of the maps others made for the previous version. I'd be happy to include kipple's new map in a future version if it proves to be balanced and offers a new gameplay angle.

Looking at the changelog and testing confirms that the issue where you have more than 2 players and the game ends prematurely when 1 player dies is still in the 1.14 release. if you play for example the 3p FFA map and kill off 1 player the game just ends. I wrote a patch to fix this in the 1.12 version looks like it didn't make it over to 1.14. I think that this still is not quite correct implementation though as the losers will get a "victory" screen but at least the game ends where expected.
Top

Here is another replay from my map showcasing a strong P1 rush, I think this may be a little too strong, needs some more testing. This rush can also be performed with the Vendeeni (I tested this but don't have replay) and is a little more aggressive due to the cheaper ships, but terran is nice as your soldier is so strong. If this ends up giving p1 too much of an advantage I think moving the artifacts around will be the easiest way to nerf this.

1st player rush is stronk even without turbobooster. Definitely need some nerf there
Rover needs +1 g
Some GUI issues with right display resources (gold and food) not being fully displayed. Perhaps smaller font?
HQs don't switch graphics when destroyed
Population becomes -1 when a HQ dies. Kipples says it counts HQ as a unit.

Unfortunately the Galactic Empires Era isn't working for me at all since switching to 1.14. I'm currently using Wesnoth 1.14.3 on Ubuntu. The details were: