So probably shouldn't bump a topic from what....2 years ago? And I don't know if I'll keep working but I still play the game and like making stuff.

That said I was clearing out some files to free up some space and came across some old Wesnoth stuff I frankenstiened. I suppose I can share them here rather than just deleting them off, see if people like them. 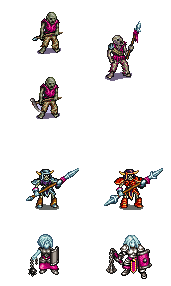 First up some Undead I made. First group are basic Zombie/Soulless just given simple weapons/tools for combat. I was making a campaign where the Hero wouldn't let his zombies spread the condition. So weapons.
Second group followed that idea and gave the Undead faction a Pierce attack. Probably an upgrade for the Soulless but never got around to recoloring the bigger one(probably level 3). And they look off anyway since they're from the Old Graphics Library.
Final one comes from Yokai faction I found in Ageless Era. I liked the idea and wanted to make a promotion for her. Found a decent armored female for Wesnoth and converted to to be closer. Not close enough though. 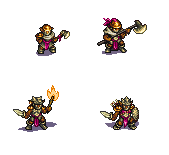 Next are just some Goblins. First just a tweaked goblin from Bad Moon Rising. Simple axes nothing special there.
The other two are goblins I made out of sprites for a Goblin Campagin. Promised Land I think was the name. I liked the idea of a little sword goblin so took the idea and ran with it into 2 different goblins. Hero on the left hits hard(For a goblin) and comes with a fire attack. Champion on the right is the toughest goblin HP wise and packs darts as a ranged attack.

I'll see what other things I can dig up but I suppose this is an okay start. Might get back into Frankenstiening/spriting.
Top

I LOVE your Goblins.
The undead aren't bad, but the Goblins are great, I'm seeing the indomitable Goblin guardian Pundirr in there.

...apparenly we can't go with it or something.
Top

Thanks guys. If you want to use them go for it. Anyway dug some more up. Also I'm gonna keep sharing story/idea behind the sprites. I feel it's important to understand a bit about why certain sprites are made. Especially for me considering I Frankenstein them. Why use these pieces, so to speak.

First another goblin. Yeah it's just a swap of one I used before but packs a 'buster sword'. Made when I was kinda stopping with spriting. Arm is off and sword colors are weird I know. Idea was to have it have one or two heavy hits compared to other goblins. Maybe Berserk(Get him hyped up on mushrooms or something).

Next up, I dug into Bad Moon Rising resources. Started looting around the Ancient North units that I think we see..., once twice? Anyway I loved the look of the big armor guys and wanted to use them for a campaign idea i had. But most the units would be bash/blunt/club anyway so had to swap the weapons on these guys. The idea was hollowed animated armor that promoted into basically "Metal Elementals".
Top

I found another goblin. This one seems more completed than Buster sword.

Time for a lesson viewers

If I recall, yes it uses Orc Archer as a base but I remember that Orcs and Goblins are the same race just different sizes/powers. That is if my Wesnoth Lore is right. Goblins are just the Runts. So if my memory serves, I made this as a promotion to Champion where a goblin's Orcish heritage would kick in. Sure would still be small but towered over goblins. Or maybe a named character for a Goblin campaign. Or just scrap that idea and have a new unit for Orcs.

Looks kinda janky on the top and legs but if people want to try using this/fixing it, go for it. It's the basement for a reason. Or maybe I should call it Garage Sale.
Top

looks cool! this can be called 'Goblin Knight: on-foot edition'

lemme get a unit tree up for you Forest Dragon.

First I changed the shoulder pads to stop everything blending together. Original on the left, changed on the right. Thoughts? 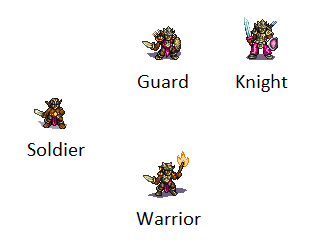 And here's a unit tree. I might make another one for the Warrior but there's at least two units running around with Sword and Flame through add ons(Bad Moon I'm looking at you) so I'm unsure if I will make another.
Top

looks good! btw, could you post with your art more frequently? since you already have a stash of drawn sprites, this shouldn't be much of a problem.
My active add-ons: [WIP] Ogres Era
My inactive add-ons: Tale of Alan (1.12),The Golden Age (1.12/1.13),XP Bank (1.14),Alliances Mod(1.14) (all add-ons no longer supported)
Co-creator of Era of Magic
Top

Well it's digging out what looks good and what seems to be a complete loss is the problem. I can post some more later but there's a lot of started ones that didn't go anywhere or others that just make me go "What was I thinking?"
Top

Great work! I really like what you"'ve done with the goblins

Okay might as well do a big one for people. If demand for certain ones are big I'll cut that out and hand it out. Meet the rejects. 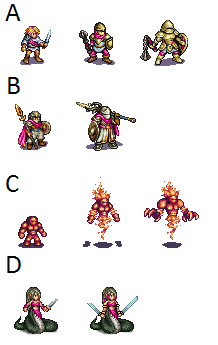 Line A - just a simple heavy line. I found the middle sprite from someone doing Templar and or Holy units. I decided to make some additions to said line. Dug back into Bad Moon Rising.

Line B - Messing around giving the Orcs a Spear user. Or just some masked guards.

Line C - Forgot who but someone was making a different fire elemental line. Took what he left behind and made a level 3. Level 3 isn't done, one shoulder isn't finished shading and the other shoulder is shaded weird.

Line D - I had dug back into the Yokai faction and made a level 4 or just a redo of level 3 to stand out.

Another reason I'm not posting too fast is I'm trying to be nice and refind who I took stuff from to Frankenstien.
Top
Post Reply
28 posts