From Rocks and Blood - Troll Campaign

From Rocks and Blood - Troll Campaign

I discovered Wesnoth about 3 years ago, and at this time i tried to develop a troll campaign. After almost 2 years of real-life occupations

, i decided to end this one.

So i worked, and i would like to know if you are interested/curious

First, you have to know that i have bad english (I'm from France), sorry for that.


"In the chaos of a devastated world, one big troll tribe surviving in some mountains lost their leader at fight, a great warrior.
Our heroe, Godug, a troll animated by a strong willing of change his spicie fate is choosed to be the new troll leader.
He will make war to the gobs, mountain creatures, undead and dwarves to permit his clan to get back the powerful of the past.
But Godug is not like a lot of trolls. He want to try to make peace with others inhabitants of the mountains, especially with the dwarves, because he is sure that the two people doesn't understand each other.
He want to build a great kingdom in the mountains in peace, but he will understand quickly that things are not so easy. These mountains are the subject of a lot of covetousness and conceal dark secrets well ".

It is a little synopsis. The story is full of events, unexpected situations and ennemies... The campaign include 23 scenarios (18 playable) and for now 12 levels are completed.

The main characters are:
-Firag, he is an advised troll sorcerer
-An unexpected allie (you will see in time)
-Crolog, leader of a lost troll tribe
-And of course Godug, king of the trolls.

Let me show you the units involving in this campaign, recruitable by the player (except goblins ^^).

I made the major part of units by myself (with animations for all units), but i took also some others away (like the goblin archer, or the fire shaman). I will put the origin of these units in the campaign's credits, if their creators accept.

Thanks for reading me! 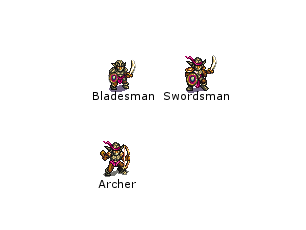 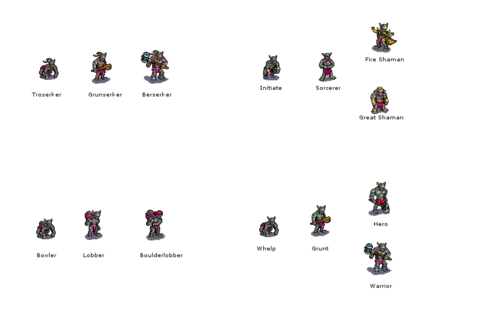 Last edited by Graziani on December 26th, 2013, 3:00 pm, edited 1 time in total.
Currently on goblin campaign "A goblin adventure" (available) and troll campaign "From Rocks and Blood"(not available yet)
Top

We can't download it, i'm working on the levels and the dialogs are still in french...
I probably release a beta version when the units and heros specifications will be ok
Currently on goblin campaign "A goblin adventure" (available) and troll campaign "From Rocks and Blood"(not available yet)
Top

Well, they are trolls afterall, so they don't have to speak perfect english. I think you can easily write the translation, if you feel so inclined.
http://www.wesnoth.org/wiki/User:Sapient... "Looks like your skills saved us again. Uh, well at least, they saved Soarin's apple pie."
Top

i speak french, so if you want i could test it.

Last edited by Paulomat4 on June 19th, 2013, 4:57 pm, edited 1 time in total.
Creator of Dawn of Thunder and Global Unitmarkers

Why not? It's very dificult for me to translate i'm so slow

For now I put order in my campaign files, my scenarios...
After that i will complete my heroes specifications and the beta will be ready
Currently on goblin campaign "A goblin adventure" (available) and troll campaign "From Rocks and Blood"(not available yet)
Top

after 6 months i've done with all the 23 levels of my campaign!

I have to finish some code and details, but it seems quite good!

Now, i'm looking for some help to balance units, help me to clean my files... It's my first big campaign, i would like this one funny, playable and well balanced.
And, if it's still possible, help for translation, as i said before every speech in my wml are in french. I've to translate it, and make a french file for my campaign.


If someone is interested to advice me, help or anything you are welcome!


IMPORTANT NOTE:
All my campaign is designed on BFW 1.10.6 for now.
When it will be ok for the 1.10 series, i will adapt for 1.11
Currently on goblin campaign "A goblin adventure" (available) and troll campaign "From Rocks and Blood"(not available yet)
Top
Post Reply
7 posts • Page 1 of 1