very awesome. well done. and it certainly has the "ancient" feel

Awesome like always. I wonder if it would be useful to have a version without the arrows too. Is that fellow talking before or after the battle? Wooden shaft may rot or be removed with time.
Top

I've no artistic skill, please take this comment from the peanut gallery with the full dose of salt.

To me something doesn't feel right. The jewellery all seems to be polished (and in good shape). The skirt around the legs looks as if it's been washed since the event that tore it. So the lich cares about the garments on its original body, but that doesn't fit with the torn bits near the ankles, or the shoes.

Then again, having different standards for the tattered cape and the non-original arms seems fine to me.
Currently updating the SurvivalXtreme Collection, and the SXC Pressure scenario. That's about a mermish necromancer, who's just found out that her Tentacles Of The Deep have been nerfed.
Top

Wussel wrote:I wonder if it would be useful to have a version without the arrows too.

I think what you are referring to are the spikes holding on the extra arm. They are supposed to be magical and keeping it animated as well.
Campaigns: Dead Water,
The Founding of Borstep,
Secrets of the Ancients,
and WML Guide
Top

Jetrel wrote:So - as a long term thought, in the not too distant future, we're going to be done with all portraits for all mainline campaigns, and basically all of our generic unit portraits. This will leave us wide open to do other things - I propose that one very useful thing to do, would be to make a body of generic non-combatant people, because they'd be enormously useful as stock characters in campaigns. Portraits, and unit sprites. People of all walks of life - merchants, noblemen, tradesmen, male and female. Also - children. These would be useful for all sorts of missions; they would chiefly be useful for cutscenes, but would also be useful for things like escort missions, guarding missions, and also as "worker units"; whether for a wesnoth mission where you protect masons whilst they build a wall, or for a user-mod which turns this into something more like an RPG or a Civ-alike.

Just had a thought: What about campaign images? It'd be nice to have a poster-like title image as oppose to one of the character portraits (usually the hero's). An image similar to that of story art, but something that would define the campaign as a whole while at the same time, of course, not giving away any spoilers.
"Everything is better with penguins."
Creator of Burning Souls, The Fall of Wesnoth (abandoned) and Adventures of Knighthood (abandoned)
Top

Pewskeepski wrote:Just had a thought: What about campaign images? It'd be nice to have a poster-like title image as oppose to one of the character portraits (usually the hero's). An image similar to that of story art, but something that would define the campaign as a whole while at the same time, of course, not giving away any spoilers.

The thought has crossed my mind, and Jetrel once mentionned the possibility to use such images as story art. An empty throne for HttT, the Sceptre for SoF, the burning ruby for tRoW...Those scenes could relate to a campaign in metaphors and use symbolism in the same way vanitas do in classical painting. Throw in some stylization to bring unity and you have an interesting campaign title screen. I might propose something eventually.

Anyway, back to this commission. Things have been more or less on hold over the past month with the editor revamp, but it really is time I finished it.
Without further ado, studies for:
- minor alts of Asheviere (the idea being to give her a different feel while changing only small details such as an arm or her facial expression)
- the defeated Asheviere, who according to the objectives of the last scenario in HttT has received quite a beating when she last appears. 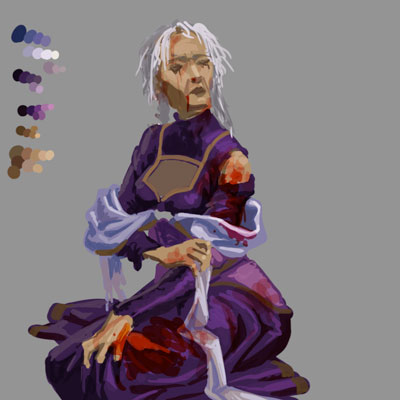 I don't object to having alternates of course, but she only has three lines before she is defeated, so it hardly seems worth your time.
Campaigns: Dead Water,
The Founding of Borstep,
Secrets of the Ancients,
and WML Guide
Top

beetlenaut wrote:I don't object to having alternates of course, but she only has three lines before she is defeated, so it hardly seems worth your time.

Or maybe the dialogue should be expanded?
Top

That's the idea. The character is awfully shallow the way she is now, which really sucks for the main antagonist of our emblematic campaign. So we would like to be able to flesh her out in the future, hence the alts. I'm only going to make two, though, and they'll still be minimalist in terms of workload.
Want to see more of my art ? Visit my portfolio !
Top

And yeah, I agree she could use some fleshing out. Honestly, the entire campaign in general could use improvement. After the first few scenarios, it dissolves into "Kill ALL the orcs (and the occasional undead)".
Creator of Shadows of Deception (for 1.12) and co-creator of the Era of Chaos (for 1.12/1.13).
SurvivalXtreme rocks!!!
What happens when you get scared half to death...twice?
Top

All of Delfador's portraits, as well as Moremirmu and the base portrait for Asheviere, have been committed.
Play Frogatto & Friends - a finished, open-source adventure game!
Top

I've let things hang for a while now. Not that I would call it a waste of time if one considers the progress that has been made on the UI revamp, but this commission needs to end sooner or later.

So, without further ado, I bring to you the defeated Asheviere. 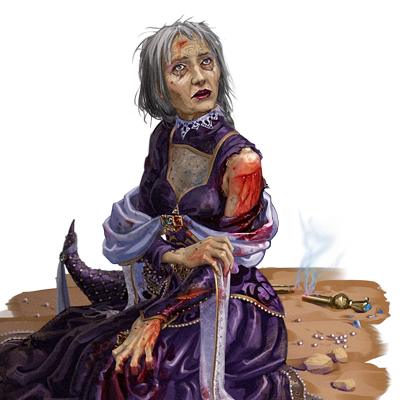 That's good. She looks more pleading and afraid that I'd have expected, but I don't think that's a problem as such. After all, if more "defeated" dialogue is added for her, it's probably not going to be just more mad raving.

Is the background intended to remain, or be removed for a final version?
Top

I intend to keep the background. I picture her kneeling with the shattered attributes of her power lying around her, and showing the ground really helps to explain the situation. It does admittedly not reflect the (difficult to predict IIRC) exact place of her death, but it's hopefully generic enough.
I might smoothen its contour, though, and I'll remove the cheesy smoke effect on the cut sceptre.
Want to see more of my art ? Visit my portfolio !
Top

The last two pictures which officially conclude this commission: final version for Asheviere's defeated portrait, and a minor alt showing "mad" or "angry" emotion.
I am also attaching the final portraits of the ancient lich, which I somehow had not provided yet, or so it seems.

I will still finish the wraith portrait and provide a couple extra grand knights for HttT as a bonus, though. 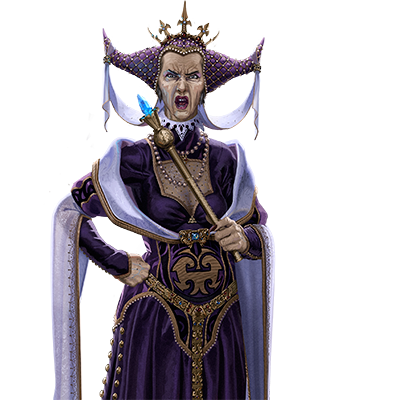 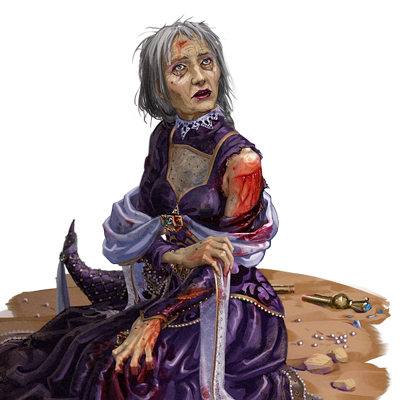 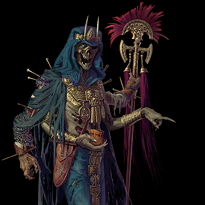 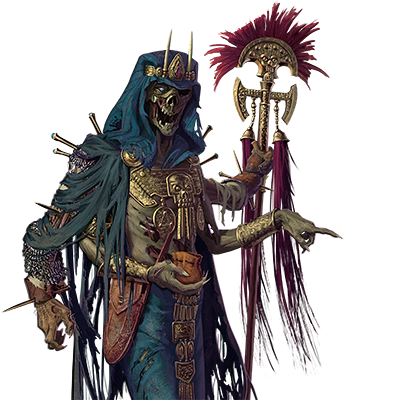