hello, nice to be here doing some stuff, i will begin this comission working the animations of the young troll. First of all, and before start the animations, i polished the baseframe, and create the north faced one. Hope to produce good stuff,

D: That "polish" loses a lot of definition
Top

It looks good and is a nice general improvement, but it does look a little bit softer. But then the Troll hero looks about the same in softness anyway. It would benefit from being a bit more defined. You could try make it rockier if you want but if I was boss I would leave it to you to decide.

Yeah, this polish is really a step backwards; it takes the sharp, angular skin of the troll and makes it look like soft, human skin. Soft, flabby skin is appropriate for some interpretations of trolls, but not for the particular interpretation that wesnoth uses, where troll skin is supposed to have sharp, rocky edges.


So I suggest, at least on this L1, leaving the SE frame alone, and "cragging/rocking" up the NE frame. Posewise the NE one looks pretty good.


Sleepwalker wrote:t it does look a little bit softer. But then the Troll hero looks about the same in softness anyway.

Yeah, that softer human-like construction on the hero is a flaw we need to fix; I spoke with him about how we're open to touch-ups on base frames for the troll line, and that was one of the primary things I had in mind.
Play Frogatto & Friends - a finished, open-source adventure game!
Top

IIRC the idea at some point was that trolls have skin that look rocky, but it becomes more "polished" with age... so it makes sense that the whelp has particularly rocky skin...
Fight key loggers: write some perl using vim
Top

hey! after see the portraits (very cool), it's true that i began in a wrong direction, so I suggest the following retouches, check it please.

It's rockier (especially on the NE) and looks like a big improvement to me, just got two points:

The spine of NE sprite looks slightly off center to the right, making the torso look a bit flat.

thks for the feedbacks Sw, (and for the previous welcome),

I did more retouches; spin, arms, and face. About the old noses, well...seems that are more prominent, but think is because he is loking to the side. In the last retouch I tried to give it more definition.

Hmm, sorry I'll have to clarify: The features of the face seems like it is being seen straight on, hence the flat looking face and especially nose. The pose of the body as well as the ears would indicate that you would see the head slightly more from the side... I think if you found a middle ground between your previous troll face and the old troll it would be perfect.

You fixed what I saw with the back, and the arms looks great. A suggestion would be to put some more light on the fingertips maybe on the NE sprite.
Sometimes we must be hurt in order to grow, fail in order to know, lose in order to gain, and sometimes we must have to be broken so we can be whole again...
- Nercy Masayon
Top

.....ok i did some retouches, only some pixels modification. For me, is ok, now. But I like to hear this from jetrel, before to begin with boobing or walking animations. About walking, a gorila estyle(using hands), would be nice, but i d'ont know if match with the troll biology. What about just a hunched pose?

I've got two principle concerns with the revision so far: the palette and the pose. The new version seems to use a much flatter palette with less hue and saturation shifts, compared to the palette on the old sprite. This isn't necessarily a bad thing given that the material is supposed to be stone, but specifically in the upper regions of the palette (i.e. the lightest shades in the palette) it looks a bit flat to me. Both the se and the ne baseframes appear slightly more bow-legged than the original baseframe, and for some reason I'm having trouble seeing the shoulders and legs in the se baseframe as conjoined... I can't shake the impression that the shoulders are somehow floating in front of the legs instead of being connected to them. I think it's due to the fact that the shoulders are facing the viewer more than the legs are. The ne baseframe's right elbow also seems like it's inverted, or at least at a slightly unnatural angle (assuming their joint movement limitations are more or less identical to those in human anatomy) though that might just be me...

I'd also mention you might want to be careful with adding the highlights right next to the outline... visually, it implies that the light source is behind the unit, as opposed to the canonical upper-right. It also runs the risk of making the unit appear more two-dimensional.

All that being said, I do like the more rock-like texture you've given them, and the revisions are certainly more readable overall than the old baseframe.

well, after see that nobody is satisfied at 100%, I check again the baseframe. Concretly, flipping the image to check if the simetry works fine. And I see that, there are some inconsistences, like the head of SE (as Sleepwalker has perceived), the arms on both, and maybe the legs on NE. So now, my intention is to retouch again. About the colors, well...., I used the same number, but maybe I closed more to the lighter.

Flipping the image is something I do often (every 20-30 minutes or so) and it's very useful. I'm surprised you haven't earlier.


artisticdude wrote:I'd also mention you might want to be careful with adding the highlights right next to the outline... visually, it implies that the light source is behind the unit, as opposed to the canonical upper-right. It also runs the risk of making the unit appear more two-dimensional.

Depending how it's applied it can also look like a sharp edge, which many rocks have.


I have tried to address some of the critique, hope you don't mind. I bet you want to get this finished so you can start on the animations. 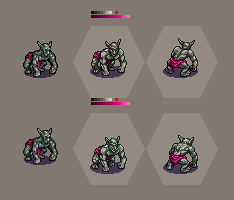 I like the rocky muscles and Sleepwalker's edits! Looks perfect to me now.


artisticdude wrote:I'd also mention you might want to be careful with adding the highlights right next to the outline... visually, it implies that the light source is behind the unit, as opposed to the canonical upper-right.

disagree completely; a dark region near the very-dark outline gets visually merged with the outline, while a bright region near the very-dark outline instead makes the outline crisp and separate from the insides, which is visually pleasing and very readable - it's exactly the kind of visual pleasantness & sharpness that makes pixelart worth it. Also I don't think the light direction is an important consideration (other than that light should come from above (from the sky), at a small angle) and I remember Sleepwalker agreeing (in the tentacle thread).
Top

*non-artist pops in*
I like the new look, but the troll's shadow now seems to be off for me (especially visible near its right hand on the SE frame).
*pops out*
Top
Post Reply
28 posts