Ken_Oh wrote:That's really weird. If you've gone that far, you've obviously used [create_weapon] more than once by that point. I have no idea what would have caused that.


Got a new weirdness for your viewing pleasure.


I started a new one player game. I got two henchmen, and then headed down to the first level.

I got debug / error messages as soon as I showed up. Attached are the replay files from the town and level 1, as well as the save file from level 1 turn 1. 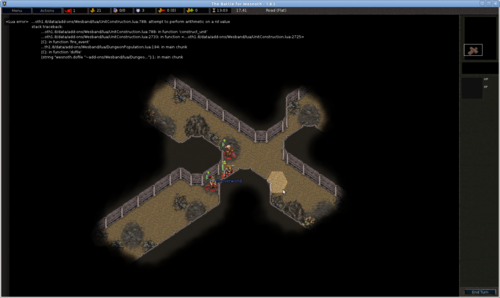 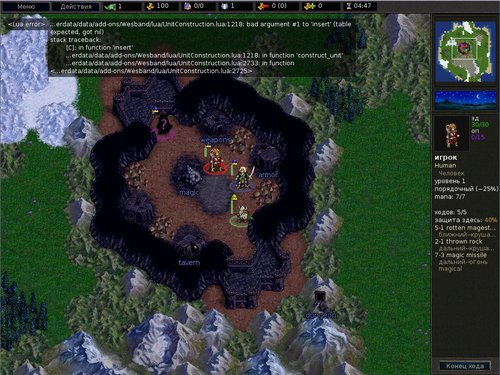 P.S. Thank you for your addon. Good Job. 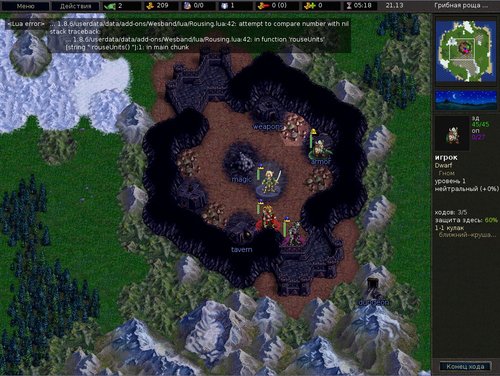 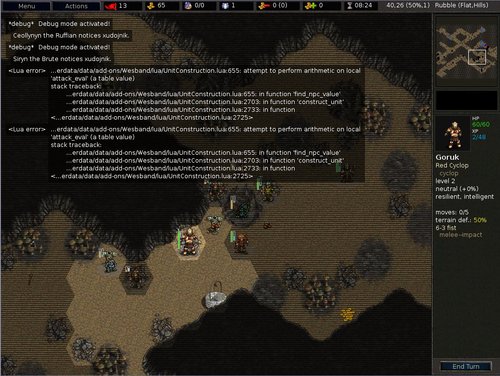 Happened after Cyclop named "Goruk" levelled up.
There are a lot of similar errors while foodpad levelled to outlaw and tentacle of the deep gets AMLA.

Hi Xudojnik, I'm not one of the programmers for Wesband or Wesnoth, but I can answer your "NPCs fight each other" question. Yes - if the NPCs are on different teams (say goblins and bandits) and they see each other, then when it's their team's turn to move, they'll attack each other.

I've noticed that too, and it makes perfect sense that different teams would attack each other. It would also make the programming easier for fights.
Top

Hi, I'm sure that it's normal what NPC fights each other. But it looks strange when they do it so far away of player.
May be they do it just because I used debug mode when notice it.
Top

My question: There is that wishlist for art, I assume it's still actual? If so, who should I talk to about that?
Second question: Is that style of sprites you are asking about?

I don't speak LUA (I'm a C++/unix person), but after seeing the same sort of "expected table, got nil" out of UnitConstruction.lua too many times, I took a peek at the code referred to in the stack trace.

So arg 1 is "abilities", and I looked upwards in the code for that var.

I guess I'll be looking for other typos, as I'd rather level my characters than throw away the games.

Bone Knight have no amla/advancement.
Top

Hi, all. Thanks for the bug reports. Unfortunately, I'm kind of swamped with real life and I think Exasperation is too. Good eye, Brian_A, on that abilities spelling. I'm sure that's all that is. Maybe you could try to change it yourself and see if it improves.

Shinobody: Those sprites look awesome and certainly better than anything I could ever do. The sprite wishlist is indeed up to date. The caveat I can offer is that I'm not sure how much of a pain it would be to introduce just one set of female sprites and none of the others. I'd have to tinker with it to find out for sure. Also, I can't tell you when someone will be able to get around to adding anything, but I will certainly get to it eventually.
http://www.wesnoth.org/wiki/User:Ken_Oh
Think Wesnoth's RNG is unfair/biased/wrong? Click here.
Top

FYI, elf female sprites are nearly completed, only 12 left, so I'm wrapping this up tonight; I think I will make human woman and dwarf woman till end of this week, maybe drake too. (I'm lazy, so I work slower if I'm not sure if what I'm doing is needed or not

But if list is up to date, then okay.)
I'm just sorry that I can't help you with interface icons, since I suck at anything but sprites

Ken_Oh wrote: Good eye, Brian_A, on that abilities spelling. I'm sure that's all that is. Maybe you could try to change it yourself and see if it improves.

I backed up a few turns after fixing the typo, but still got the exact same error message. Odd thing is, it looked like the variable 'abilities' was declared as an empty table [map/whatever] and there didnt' seem to be any way to set it to nil afterwards.

But then, I don't speak LUA.

I'v got a lot of errors, same as in this post while Bone Shooter levelled up to Banebow.

EDIT: And while Banebow get AMLA.
EDIT2: And when Hydra advances to Deep Hydra
EDIT3: and when Woodsman advances to Poacher
EDIT4: Thug -> Bandit causes these errors too

I have no idea why this happened. Here is replay. 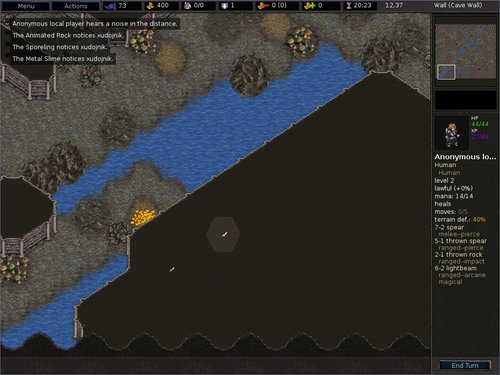