Edit : the Sceptre of Fire portrait gallery is now complete. I'm gathering here the final version for each portrait.

The Rise of Wesnoth is complete and Descent into Darkness draws to a close : it's time for the next big project !

Sceptre of Fire is what'll keep me busy for the next couple of months. As a preliminary, here's an outline of what portraits I'll be doing, such as Zookeeper (whom I'm quoting below) describes them.


Alanin, human dragoon
"He's the guy Haldric sends to go with the dwarves as his personal representative of sorts, so he could have some special regalia, although of course it'll have to be something other than the sceptre symbol used in later times. The whole campaign is said to have lasted 15 years, and in the epilogue Haldric tells him he's old enough to retire, so that's a hint towards his age." King Haldric II ( the same Haldric II Kitty portrayed for Legend of Wesmere)
Kitty's portrait of him will be re-used at the start of the campaign. I'll likely have fun with an older variant for dialog scenes in the epliogue (entirely inedite of course, I'm not painting over another artist's work), unless Kitty wishes to bless us with one of her own doing Bagnur, dwarf stalwart
"As he himself says, he's "a retired warrior" so a bit older than the other dwarves (except perhaps Thursagan)." Durstorn, dwarf lord
"He's the leader of the clan, so he should have the most bling on him. He's pretty greedy and hasty, maybe even crass. Generally not a very pleasant person, but apparently not a terribly incompetent leader either (at least until the ruby corrupts him)." Rugnur, dwarf fighter
"Relatively young and not of especially high rank. Not particularly bright and talks in a pretty informal manner to everyone. Not greedy or very interested in gaining status, riches or fame; probably he just wants to do his job so he can go home and work on a miniature collection or something. That is, not a very exciting protagonist but more like the average joe who gets sucked into a big mess." Thursagan, dwarf runemaster
"Thursagan is the runemaster. He's the best and he knows it. He's a hermit living in the wilderness so his outfit should reflect that (gryphon feathers, wolf fur or something like that would fit nicely), and while his equipment should include some smithing tools, he shouldn't look like he's just been hammering away in his forge like the core runemaster portrait. And, of course, he should have a big gorgeous hammer. Karrag's portrait in The Hammer of Thursagan should feature the same hammer, so you might take inspiration from that. Having faintly glowing runes on its side would be nice."

Note worthy of interest : "as a general note regarding the dwarves, it seems like their clan is a relatively small one and not very rich either, so I'd suggest being rather conservative with their bling." Unnamed elvish marshal.
"Currently almost every scenario featuring an elf enemy uses a differently named elvish captain or marshal, but it'd be nicer if we could use the same character as the enemy in several scenarios (I'm thinking 5, 6 and 8 ). If you want to do it, then we'll make one of the elf leaders into a main elf antagonist and give him more dialogue to go with the portrait." Khrakrahs the dragon.
"It would be good to have a unique portrait for him, since the only alternative is to use the same portrait as Shek'kahan in TRoW uses; that would somewhat fit in with the new portrait style, whereas the current Khrakrahs portrait won't. However, if you do this then it might make sense to make it the core portrait for Fire Dragon instead and have Khrakrahs (and Skek'kahan too, probably) use that."
--> Expect something darn big similar to tRoW's Rithrandil. I'll be doing him last, hopefully a worthy masterpiece to conclude the series. Edit : I'm actually going to do this one at an undefined later date
Top

Scale Rugnur's head up a bit, but otherwise he looks good. It would be worth comparing Thursagan's Hammer with the version from the Hammer of Thursagan campaign, and doing something at least vaguely similar.
http://thespaceinvader.co.uk | http://thespaceinvader.deviantart.com
Back to work. Current projects: Catching up on commits. Picking Meridia back up. Sprite animations, many and varied.
Top

i wonder if dwarves (especially fighting ones) should appear shorter and stockier, almost as wide as they are tall, to contrast with humans and to better account for their strength and resistance
Top

This isn't so much an art critique as a fact-checking one, but here goes.

The one thing that bothers me about Rugnur is his axe, which looks to me almost like an overgrown francisca. Granted, he's a dwarf, so I'd image it's supposed to be a bit bigger than and different from what a human would use, but I don't think there's any way he could swing that with one hand.

If you've got a good reliable reference then I'll stand corrected, but the battle axes I'm familiar with are also usually thinner:
http://www.hurstwic.org/history/article ... ection.jpg
or thick but substantially less broad:
http://www.hurstwic.org/history/article ... _blade.jpg
It's spelled "definitely", not "definately". "Defiantly" is a different word entirely.
Top

Where does it say he's using it in one hand? He's not got a shield, it could very well be a two-handed axe. Indeed, I'd assume that it is. Portraits don't have to have the exact same gear as sprites

Actually, he does have a shield, hanging on his back. At least that's how I see it.
Top

So he does, good point.

My experience comes from using not an axe put a pick axe roughly that size but I'd guess that a strong man could wield an axe that size (presuming that from ground to waist on a dwarf is about ground to thigh for a human) one handed but probably not for very long without tiring.

It would probably be better to shrink it if it is intended to be a practical one handed weapon.
"There are two kinds of old men in the world. The kind who didn't go to war and who say that they should have lived fast died young and left a handsome corpse and the old men who did go to war and who say that there is no such thing as a handsome corpse."
Top

I think a portrait should be made for the Dwarvish Miner, They're only in this campaign but they could still use one, IMO.

Rugnur looks great, I like how the portrait really fits his character

Velensk wrote:My experience comes from using not an axe put a pick axe roughly that size but I'd guess that a strong man could wield an axe that size (presuming that from ground to waist on a dwarf is about ground to thigh for a human) one handed but probably not for very long without tiring.

It would probably be better to shrink it if it is intended to be a practical one handed weapon.

Good point about the axe. I'll try and make it one-handed, but if it ruins the pose I'm keeping the b4st4rd axe (as in "somewhere between one- and two-handed"

). Either way, don't expect a fully-realistic tiny head as in johndh's link (btw, that video guy is brilliant

). If anything, I'm aiming for viking axe-heads with these dwarves.
Top

They're work-in-progress and sometimes difficult to read, but they should give a good idea where we're going with the SoF portraits.

A reference to his age, Bagnur will display a bald patch and sports a mix of mail, plate and leather.
Durstorn will have much more lordly gear, and I'm aiming for a crazed looks. Is this ok with his character ?
Thursagan will wear multiple layers of poorly-cared for clothes and a raincoat made with dried leaves. His famed hammer will be in excellent condition, naturally, though it should not be obvious at first glance from the multiple layers of cloth, leather and dirt that cover it . 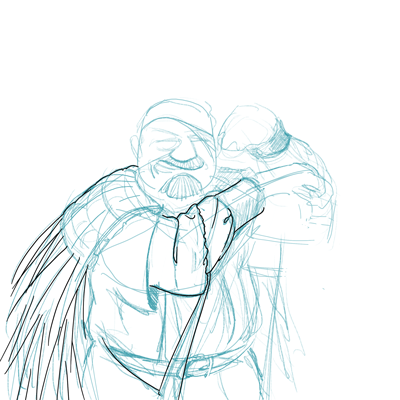 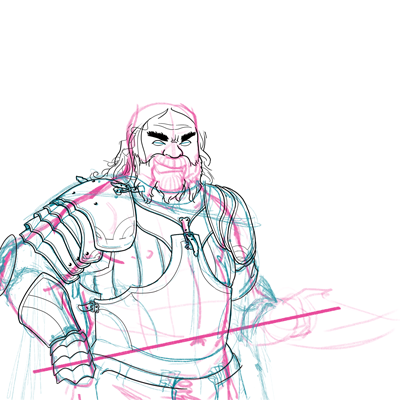 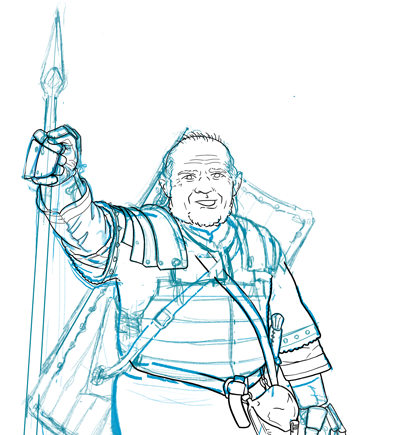 Nah, just kidding. But at the moment, I dunno, he looks way too human. The others also look a lot fatter than him, and since he spends his time twiddling his thumbs (he's retired) you'd think it would be the other way round.
No offence to people who spend their time twiddling their thumbs.
"What do you mean, "a dwarvish dragonguard with marksman is overpowered"?"

I view Durnstorn as more aloof and overconfident than crazy - recall that first post description saying he's not terribly incompetent a leader. perhaps try a more 'never satisfied kind of boss' look? And that armor - is that a ton of padding sticking out on the sides? One would expect a leader to be rather more firmly armored.
Blame it on my disgraphy, but I see something not right about the thicknesses of his upper arms, as viewed over the cover of the shoulderplates, and the part closer to the hand, and itself - they seem like half the width - kindof like we stitched a human hand to a dwarven arm
As for other characters..similar on Baglurs armor - he was a stalwart after all, we could expect a rather worn-out, maybe even long unused, but rather heavier armoring (or at least thicker than the tinfoil feeling the sketch gives). And yes, I'd miss a nice, large beard if he didn't get it too. Those are some large, pointy..well..hobbity ears there too, while there's no reason not to make such a feature, perhaps avoiding the pointy bis would be more recommended..unless it's the new vision of dwarves that they SHOULD have a little pointy end on those?
Thursagan..best runesmith around and poorly-cared gear? I thought runes require a lot of care..the kind of lot that gets into your blood and gets on you when doing anything else as well. Makeshift materials - ok, not being much of a tailor - ok, but it would be nice to show he at least tried..and maybe some odd runic elements from time to time - old habits the lad surely has, and why would he not use them to make some things easier out in the wild (would be a nice easter egg if the leaves on his coat were formed into a runic pattern