*cough cough* that's supposed to be Hilldon, the no good scoundrel, not a peasant

No, I really mean the peasant.

I think the current version of Hildon is a bit too chubby. I envisioned him skinny and lanky. He is a rat!

Frogger: You mean they are all brooding sort?

haha good point, haven't noticed that honestly. Let's also keep in mind that these are just flats though, and I usually spend some considerable time further playing on my linework while shading, so I'm hoping even under such a state of affairs they will not look so similar as you have envisioned.

jb: hmm, let's see how a longer neck will do for Hilldon portrait. A quick guess here tells me he'll look less chubby then...

Meanwhile, I have flats for Athena.

Also, my ogre portraits were bothering me. As johndh so kindly clarified a few things about them, I was strongly compelled to dress them with some fur, as it was beyond my comprehension how such an uncivilized race would come so shiny as depicted under mainline - not to mention their striped pants, doh

I can easily play with the coverage area of his fur. But what would you think of the idea, the idea being diverting from mainline a bit? If i have a go, then I'll line my sketch for Ordon as well. Oh, I could put over a few tribal stuff, but didn't do that considering he was captivated. In any case, let me know if you guys are okay with such a monster. 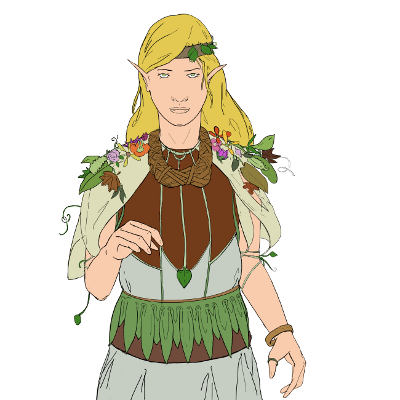 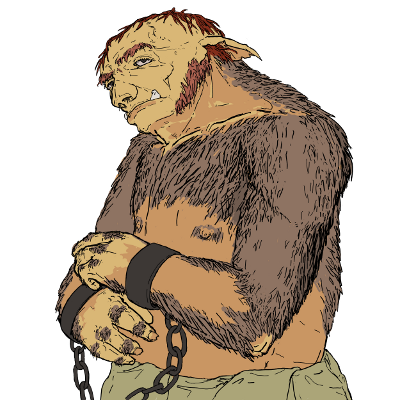 your artwork is impressive, bringing further personality to the characters; the look you give them will even influence the tone of their speech.

As for Hugo, if you want my uneducated guess; I like the first ogre head (with some modifications ofc), it fits well for a pirate. I like that punkish haircut, since younger siblings in a family tends to be more rebels (studies show), a mo-hawk would give a more piratish look to Hugo who seems too much like a good kid doing his homework after school.

Largo looks typical for his role. He gives the impression that despite the ravaging he suffered in the past, he puts some efforts about himself. It seems right that looking good, the strong head puts odds on his side to gain influence over others, even amongst higher spheres of society.

Marco is just perfect! His gaze feels like the man he is, doing the best for himself alone; dressed like a [censored] who profited from those around him. Besides I also like the lunatic look of Sep 09 with empty eyes and opened mouth. Still, I think the latest art fits him better as he's probably more 'intelligent' than 'absent'.

The Chinese theme for the ogres totally sounds fit. That would explain their scarcity in Wesnoth, being from a distant land, foreigners in culture. While the latest hairy ogre seems from too far away; jumped ship from planet of the apes, the chain and handcuffs are more than adequate. I'd give them some more tattoos and even piercings as a way for the unimaginative Gaddon to tie them down in punishment.

Athena could use some fairy floating lights around, that way her 'absence' would be more 'present'. Bringing natural reverence despite her disconnected speech.

Here's my brief criticism (imagine the long one) really hoping it didn't overshadow how impressed I am by your art. Of course, my comments are based on my natural assumptions which may or may not be right.

Please continue the good work, your characters are an orgasm for the eyes to see.

For whatever it's worth, I'd say that ogre3 looks like an ogre that has been raised in captivity, while ogre7 looks like he just got hauled in yesterday. Three's subdued look and misshapen skull suggest a lifetime of abuse and neglect. Seven looks like he's pondering how he's going to wrap that chain around my neck and squeeze until my head pops off. He doesn't only look mean and brutal, but also cunning, like he's waiting for just the right moment for his captors to turn their backs so he can thoroughly enjoy strangling them. Three is a caged and whimpering dog, while seven is a barely-restrained wild beast. So yeah, I guess that's something to consider, depending on the character(s).

I don't really know how to feel about the hairiness. Part of me says it makes sense because we mainly see ogres in the cold mountains, while the other part says it contradicts what we've seen so far. However, it could be that captive and wild ogres appear differently, much like captive and wild pigs.

I like the hairless ones better.
My MP campaigns
Gobowars
The Altaz Mariners - with Bob the Mighty
Top

I love the flowers on Athena, and the clothes are great. However, I think her ears seem a bit silly and her eyes give the impression of focused determination - rather than abstraction.

As for the ogres, I quite like the new one. He looks more mean and less of a idiot. The chains look cool, but wouldn't work beyond scenario 1. If people have an issue with the hair, perhaps you could scale it back a little?

I also like Natasiel's idea of Largo being a bit of a punky character. Piercings and trinkety things hanging off his jacket would fit a pirate.

All, in all this is good work!
My current projects:
MP pirate campaign: The Altaz Mariners
RPG sequel: Return to Trent
MP stealth campaign: Den of Thieves
Top

I will certainly take your comments into consideration. I may give Hugo a punkish look as
you guys have suggested.

For the ogre, I posted that as part of a conceptual investigation - when I look at it now I can tell it asks for various tweaks. Though, seeing skin bare ogres really troubles me - I also don't like those portraits atm either.. That said, expect me to put some further work about ogres soon. :/

ps: Bob, I edited my post about the peasant, with some dirt smeared over his clothing. 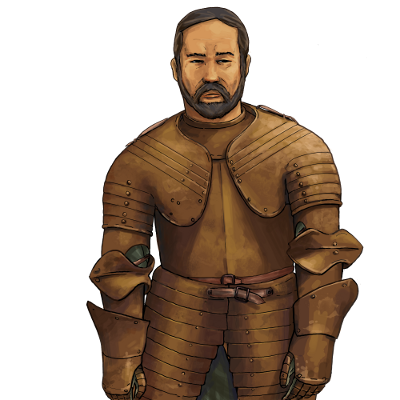 This is good, your metals are looking nice, but you NEED a stronger overall light source to give the piece depth and life.
http://thespaceinvader.co.uk | http://thespaceinvader.deviantart.com
Back to work. Current projects: Catching up on commits. Picking Meridia back up. Sprite animations, many and varied.
Top

Thank you TSI. Yes I am aware of that, though the reference I used for the armor had somewhat a similar lightsource (aka flashlight!

), and I didn't see any harm executing something parallel to what I see.

I did the shading for Renaldo. I am.. well, dubious about the way I shaded the pattern of his tunic. If it's looking horrendous I will try my hand on that again, else I'll be starting to shade Hilldon (do not worry jb, will try to give him a leaner figure.) 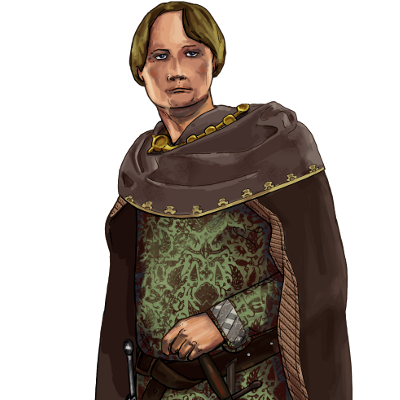 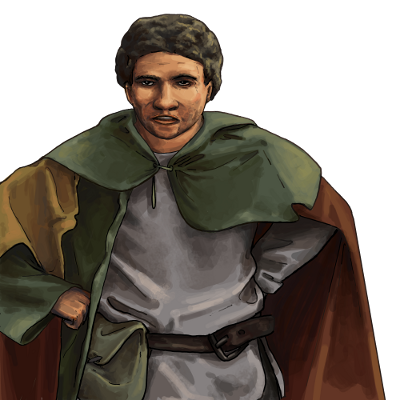 Really awesome work. I do notice a difference in the skin and hair shading you do compared to Bob and Kitty (This is no judgement).
Keep in mind to keep old artwork, when you make a complete replacement. It might be usefull somewhere. I am just saying that because I think it was Doofus who is throwing all old stuff away.

Where is the campaign? Is there a discussion thread? Can't wait to see a completed campaign. ( Iam just saying that because some fellows post 1 or 2 scenarios and than nothing ever happens). I think a first part should have around 9 to 12 szenarios. Please make sure the szenarios each are not getting to big (map wise and unit wise).
My Temple Project: http://forums.wesnoth.org/viewtopic.php?f=23&t=29800
This is "must-play" campaign! Don´t read the thread, unless you need help. http://forums.wesnoth.org/viewtopic.php?f=8&t=31895
Top

Thanks Tet. Yeah definitely there's a difference because I don't yet have a systematic shading method and usually end up dribbling my wacom pen over the tablet

And of course I keep my old artwork, and they are also always available to whomever as long as they bother themselves digging those from the annals of the forum.

Shaded Marko. I put some effort into his hair but.. can't get anything better than this atm, may need revision at some point. I'm going to proceed with Alderot. 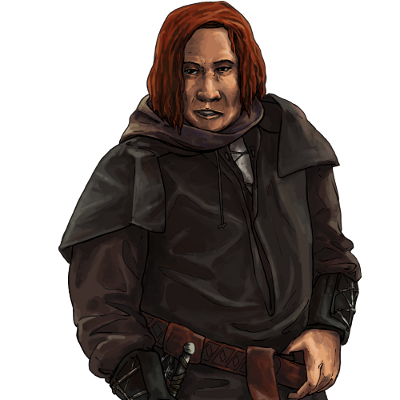 Perhaps there could be a clear line where the hair is parting...
segmentation fault
EBfW, GtR, Art, Old art
Top

Really nice work on Gaddon and Marco, but I agree about the hairline. In any case, the expressions on both of them are spot on - as are their clothes and armour. Renaldo's clothes (and make-up?) look good too, but I find his face a bit weird. Hilldon looks pretty cheeky, but very suitable, even though his hair looks a little like a wig.

These portraits are certainly improving. They are looking great.

Tet, there is a thread for the campaign: here. We've released a demo of the first handful of scenarios. They are more or less complete in themselves. Work continues apace on the next installment, but it's a big old project.
My current projects:
MP pirate campaign: The Altaz Mariners
RPG sequel: Return to Trent
MP stealth campaign: Den of Thieves
Top
Post Reply
106 posts