just a quick question, i just wanted to start althurin, the campaign's dwarfish runesmith. but i can't figure the sprite out - what the heck is the thing on his head? a helmet? a crown?

@ trashman: thanks, but talent is bad concept. there is only work and practise and careful watching. talent and inspiration are excuses for amateurs

@ doofus: thank you! i love the idea of him with a basecap and earphones - that would make a great easteregg!
Top

Which sprite is it, kitty? This one:

If so, I've done some fiddling to that sprite in the past (to make ThoT's annalist line), and i think it's supposed to be a crown or circlet type thing. This is how I interpreted it. A reasonable combination of protection decoration.
http://thespaceinvader.co.uk | http://thespaceinvader.deviantart.com
Back to work. Current projects: Catching up on commits. Picking Meridia back up. Sprite animations, many and varied.
Top

thank you for the quick reply!

it's actually this sprite:

- a bit different, but similar enough. so it will be kind of a symbolic/decorative helmet-thingie... did you make your's completely up yourself or do you know some historical references for this type of circlet?
Top

Next level up, actually. I basically made it up. I think it would work, though. If the perspective were right, and the nose piece wasn't quite so tiny...
http://thespaceinvader.co.uk | http://thespaceinvader.deviantart.com
Back to work. Current projects: Catching up on commits. Picking Meridia back up. Sprite animations, many and varied.
Top

first rough for althurin, the aforementioned runesmith. i'm not sure about him - i like him, but i'm not sure if he feels "wesnothian" enough (although there are no official wesnothian dwarves yet)... the sprite has this ridiculous hammer which has the length of his body...

the usual stuff: he is unfinished, colours are completely preliminary etc. 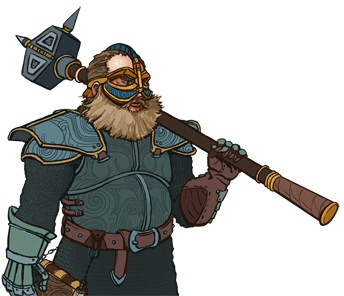 VERY nice. I've been trying to get that portly-but-powerful look myself in a number of pics, and you're cracked it. I love the interpretation of the headgear, too. Not a lot more to say, really.
http://thespaceinvader.co.uk | http://thespaceinvader.deviantart.com
Back to work. Current projects: Catching up on commits. Picking Meridia back up. Sprite animations, many and varied.
Top

Whereas I agree with thespaceinvader about the look in general and think that the hammer isn't too much of a problem (I mean it's not too ridiculously oversized), I really don't think the headgear's such a good idea. When you think about it, it's a lot of metal strapped to the head only on the face - it's uncomfortable, hard to wear (assuming the things going around his head are metal) and doesn't really provide much protection. It also makes him look cross-eyed

The armor will most likely look great after you've finished this, those engravings look very promising, and aside the headgear the face looks like it fits to the rest of the body, which is not the case in many other dwarf-interpretations I've seen. There's also something strange about his shoulder-pads, his left one seems to bend up while the right one is is pretty straight and goes even slightly down.

Also, I'm not sure if you aimed for a very strict/stiff look, but the arms make it so. His right arm's currently very straight, and the wrist goes on by the arm straight ahead - the whole arm could bend a little from the elbow (like point somewhat straight down instead of going by the same line with the upper arm), and the wrist could bend slightly towards the body.
His left hand isn't probably that much of a problem, but as a constructive crit, it's currently a bit small, and the forearm looks somewhat awkward - I don't really know how to point it out, but it takes a lot of weight away from the hammer. The fingers just shouldn't wrap around the hammer that symmetrically. I can't really find any good reference for what I mean, and I can't draw it cause my wacom's not home with me.

Hm. Well that's a good block of text.
For the dark gods!
Top

Another thing about the mask: according to ESR, the dwarves of Irdya consider disguises to be an obscene concept, so headgear that covers only the face would probably be badly received.
Wesnoth UMC Dev
Stories of Tarlyn (on hold) - Era of Strife - The Dark Hordes
Top

Yes, the "masked dwarves" are the bad guys in Hammer of Thursagen campaign.
http://www.wesnoth.org/wiki/User:Sapient... "Looks like your skills saved us again. Uh, well at least, they saved Soarin's apple pie."
Top

Although (correct me if I'm wrong) IftU takes place around the time of UtBS, some uncounted hundreds or thousands of years in the future from tHoT. Sp the cultural attitudes, while similar, aren't necessarily connected...
http://thespaceinvader.co.uk | http://thespaceinvader.deviantart.com
Back to work. Current projects: Catching up on commits. Picking Meridia back up. Sprite animations, many and varied.
Top

another update on althurin.... (please click the picture before you comment, the forum does evil things to the shading!)

and thanks for all your comments - i completely forgot about the evil masked dwarves. dang. i kept the fundamental design but reduced it until enough (?) face was visible. and i loosened up the arms position and changed the handsize on girgistan's advice.


@ ai - i assume irdya is the world of wesnoth? i haven't heard this term before. 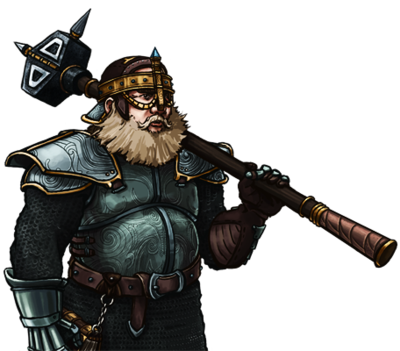 Eek! Kitty has became a dev! Congrats!
Check out my sprites!
Top

Cool. It took me a small while to notice his left index finger, but I see what you did with it. Great job, this looks awesome (good thinking with the headgear, by the way, it looks like a half-crown, half-skullcap now).
For the dark gods!
Top

Irdya is the name for IftU/UtBS era wesnoth. It could be for all wesnoth, but noone's ever codified a particular name for the planet for normal-era wesnoth.