Mog will probably need to look at how these would be committed/what the WML would be (if you don't already know how to do so).

I really got problems with the WML stuff. That would be nice if someone else does this. The chasm transistions are a mess to me, and i'm not abel to build a chasm tile out of these by myself, so if i want a chasm background, i have to copy it from an editors screenshot

Yes, I had this problem as well when working on the cave river.

I also found that unless you want stone bridges to hang in the air while zigzagging, the normal type of bridge isn't going to cut it - need a full out new tile with chasm transitions so you can add supports for the bridge descending into the darkness.
Top

My gosh, I'd love it if our current water bridges were like that. <3
Author of the unofficial UtBS sequels Invasion from the Unknown and After the Storm.
Top

I love both. Please continue!!!
The Era of Myths
The "How to Play..." series
Second draft.
Top

I've finished one set. Well I'm not sure if the transitions fit each variation of the cave ground tile. A lava set of these is being worked on. 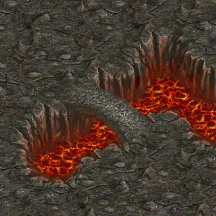 Those are very nice.
Top

cool, but with a problem. unless im wrong about this, you should probably widen the bridge to the south.
Top

I just thought the same, but then I remembered that we can adjust the vertical position of units with the "unit_height_adjust" attribute.
AurÃ« entuluva!
Top

The result is great!

mog wrote:I just thought the same, but then I remembered that we can adjust the vertical position of units with the "unit_height_adjust" attribute.

it would save me the the work of redrawing, and units would stand in the middle.

that's why a set of my "wooden prototype" (you can see it in my former posts) is planed, after the lava set is once done. 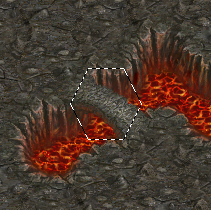 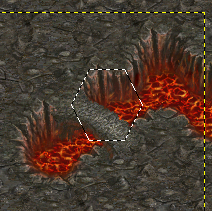 I will leave it to mog and Kestenvarn to deal with the issues of committing this, and making it game-useable. Graphically speaking, I think this looks great - I extend a hearty congrats to musketaquid.
Top

Yep as already said nice looking forward to see it ingame.
... all romantics meet the same fate someday
Cynical and drunk and boring someone in some dark cafe ...
All good dreamers pass this way some day
Hidin’ behind bottles in dark cafes
Top

The lava set. Here it is.

the | and / have problems with their right and lower-right sides (respectively) appearing to have holes in them.
Top

there is a way to adjust a unit's height on a given hex.... that's already done for castles.

not sure how it works though
Fight key loggers: write some perl using vim
Top
Post Reply
92 posts