a trick to make a map(you may have already known)

a trick to make a map(you may have already known)

The original image came from somewhere of Google map.
I added grid on it and it would help to find the layout of terrain tiles from the image.

Using this method,you can make a map easily.Also,you may make something special,such as Hulk's map

I know that the created map may be unbalanced but it could be an option for campaign developers.

If you have already known about that,just skip it 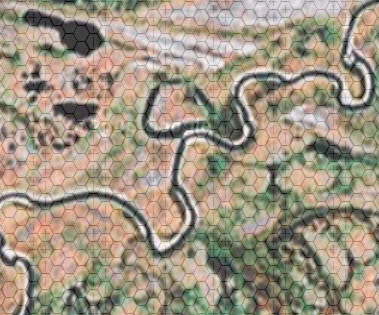 How exactly did you put a grid on that image?
Top

Right, then where did he get that hex map with the holes?
Top

I would try my best to tell how to do that.
(My english is not good.I hope you can get what I mean

Thirdly,
Place HexIMG on layer 0 and the source image on layer 1.
Then,adjust the opacity of the source image's layer so that grid of HexIMG could be shown.After that,just delete the uncovered part of HexIMG.That is useless.

Since I am not good at software,someone may think this method is stupid

Hm. Decent idea. IMHO it is still probably easier to just make the map yourself, but this could turn out useful for someone.
For I am Turin Turambar - Master of Doom, by doom mastered. On permanent Wesbreak. Will not respond to private messages. Sorry!
And I hate stupid people.
The World of Orbivm
Top

Once I made a program in Perl to do make maps from images:

It cuts the picture in pieces (not hexagonal, but squares), converts pixels in all piece to terrains (using external config file with info like "blue => water, green => forest"), and then selects the most frequent terrain for the hex. And it writes an output in "wesnoth map" format.

It works well when the things in picture are larger then a hex. (That is, it probably would not work with an example picture in this topic, because even where river goes through a hex, most hex pixels are not blue.) It is better for a non-realistic, cartoonish maps... just draw them in MS Paint, and convert.
Top

I've been toying with the idea of trying to build Wesnoth maps from SRTM data (elevation data available for pretty close to the entire world, collected by the shuttle) -- specify a longitude/latitude max/min and a scale, then attempt to use elevation data + land use data to build a representative map. Unfortunately, given my current workload, I'll get to it sometime in 2020...

If anyone were interested, I could give them what I have so far (mostly relevant libraries and references).
Author of Wercator
Top
Post Reply
8 posts • Page 1 of 1