I need help with this portrait

Forum rules
Before posting critique in this forum, you must read the following thread:
Post Reply
2 posts • Page 1 of 1

I need help with this portrait

This is my first portrait, and I can't color it right, especially the hair. Can some artist here give me some help? 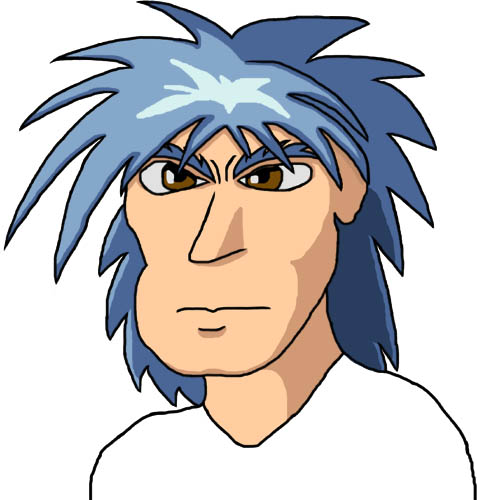 "Waes-hael! for Lord and Dame! O! merry be their Dole; Drink-hael! in Jesu's name, And fill the tawny bowl."
King Arthur
Top

It's a good idea to start at that resolution.
Your shading/coloring is also very clean-looking, being neatly separated into bands (good for cartoonishness, bad for realism).

Your shading, though primitive, is more or less correct for a light source coming from the upper-left-to-center-left side of the picture.

The shape of things is quite awry, however:
Ã¢â‚¬Â¢ The shoulders need to be even, or within a half-cm of being even, a measurement I'm giving relative to the size of your picture.
Ã¢â‚¬Â¢ Some of the lines need to follow smoother curves, which may be facilitated by using a bezier path tool instead of a pen tool (looking at this image, I'm guessing you drew it on a computer). This is especially evident on the shoulders/shirt.
Ã¢â‚¬Â¢ That cheek (his right) bulges out WAAY too much, even for him having a wad of something he's chewing in there.
Ã¢â‚¬Â¢ A good rule to follow for eyes is to put half an eye's width between the eye and the side of the head, and a full eye's width between the two eyes.
Top
Post Reply
2 posts • Page 1 of 1