beetlenaut wrote: ↑March 2nd, 2019, 7:37 pm The soulless one could probably stand to be a bit larger still, but maybe just spreading its legs out would be enough.

I moved the legs a bit, and fussed with a few other details to make them less similar. I updated to the current (as of a couple hours ago) 1.14.6+dev, and looked at SotA, but don't see the spiders there (or in core). Do the spiders retain anything like poison or webs? I saw this:

beetlenaut wrote: ↑December 9th, 2018, 9:17 am This will be rather awkward since the player is likely to want to recruit a couple spiders in the next few scenarios--They have good movement in caves and more hitpoints than most other corpses.

So, probably not, but just checking. 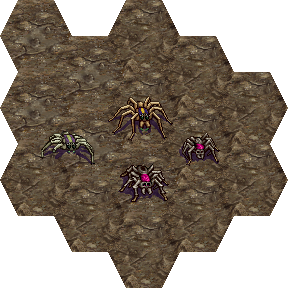 That's because recruitable corpses are only in 15.0+. Adding them involved making a lot of changes, so it would have broken all previous savefiles, which is against the rules.

No, they don't get any special abilities. They do have a fang attack instead of impact though.
Campaigns: Dead Water,
The Founding of Borstep,
Secrets of the Ancients,
and WML Guide
Top

beetlenaut wrote: ↑March 3rd, 2019, 5:08 am No, they don't get any special abilities. They do have a fang attack instead of impact though.