LordBob, you are legit artist. Why do not you redraw the portraits of Konrad and Delfador (and, maybe, Lisar and queen)? Konrad, Lisar and Delfador is the first thing every new player sees. I find it rediculous that they has almost worst pictures in the game.

P.S. btw, I think I can draw/redraw someone's portrait. Not main characters, of course, but nevertheless.
My pics: http://izg.daportfolio.com
Last edited by cKomuHKa on March 15th, 2013, 8:45 am, edited 1 time in total.
Top

cKomuHKa wrote:LordBob, you are legit artist. Why do not you redraw the portraits of Konrad and Delfador (and, maybe, Lisar and queen)? Konrad, Lisar and Delfador is the first thing every new player sees. I find it rediculous that they has almost [censored] pictures in the game.

Konrad and Li’sar were already done by kitty for 1.11.x.

If you are playing Wesnoth 1.10.x then you are seeing outdated art.

Also, watch your language.
Author of the unofficial UtBS sequels Invasion from the Unknown and After the Storm (now available for Wesnoth 1.14.x and 1.15.4+).
Top

This is exactly what this thread is about.

Lisa'r and Konrad were already taken care of by Kitty, you'll find new portraits for Delfador in the previous pages, and I'm currently working on the queen.

Also, I've had a look at your portfolio and yes, if you're willing to give it a shot we would welcome your contribution. We're still lacking some monster portraits, story art is a mess, some campaigns need a new cast... Good art will always find a use. PM me if you're interested: surely there's a project out there that can fit your style.
Want to see more of my art ? Visit my portfolio !
Top

vultraz wrote:I don't really like the headgear, though. It seems so...impractical.

Primary function of fashion accessories is to make wearer look good. There is no need for being practical. Headgear on portrait is exactly as much practical as long sleeves. Nevertheless it is historically accurate what shows again Lords Bob great attention to detail. If you are interested what people of higher classes were wearing in this epoch you can follow link at page 29 of this topic when ancient lich portrait was discussed.

vultraz wrote:I kinda think she'd look better with her hair let down and a small jeweled circlet for a crown, kinda like the one the storyart depicts her son lifting from the dead king's head, since ostensibly she would have that crown now.

Very unlikely. It is almost certain that Garard II as men of past was killed for his crimes against fashion.
Secondly this story images aren't good reference. Although they were best graphics in game when they were included and still are superior to most of pictures of this type. Together with some sentences from intro they may produce feeling that kingdom of Wesnoth is so huge that from highest tower of Weldyn it is possible to watch what Cac the peasant is doing behind barn on the frontier.
Beside that they are not well composed. Just look on this image. What queen is doing on it? Carring her son? At least 240 pounds of steel muscles in armor. Now lifeless corpse. Woman of such posture? If she does why her hands are straight? If she don't why prince body is in such strange position?
Taking into account all of this I'm sure that this pictures can't be used to establish standards for new wesnoth art.
Also clothing in medieval served as a mark of wearer status in society. Which is already well reflected in all wesnoth portraits. So anyone on first glance could know with whom he is dealing with. And regarding attire of a person on portrait by Lord Bob I have no doubts that it is an image of a queen.
Top

Agreed. Not to mention that this headgear adds some evil points to the image.
Top

Together with some sentences from intro they may produce feeling that kingdom of Wesnoth is so huge that from highest tower of Weldyn it is possible to watch what Cac the peasant is doing behind barn on the frontier.

Hehe, That exactly how it felt the first time I played this game. I was hooked the very instant I saw those screens.

But actually, they're quite good : despite their admittable flaws, they're very expressive and manage to carry a very strong emotion. Which, imho, is a lot more difficult to achieve than a technically impeccable drawing

Regarding the headgear, it is necessary for every reason mentionned above. I want the portrait to show her unmistakeable status as the queen of a medieval kingdom, and not just the average fantasy babe cliche. But do not worry, you'll get to see her hair: I was also asked to make a 'defeated' alternate portrait, in which I plan to show her with torn clothes, coif gone, and various injuries
Want to see more of my art ? Visit my portfolio !
Top

Nice looking queen. Reminds me of that green evil Disney Queen. I forgot the name. Can't wait to see her portraits. Defeated portraits for enemy bosses is just awesome. Hope that will be a beginning. Every campaign could use this.
Top

Quick update on Asheviere. I'm pondering different colour schemes for her: which one would you say best suits her character ? I'd either go for the deep purple or the regal crimson.
(and don't say anything about her face, it's nowhere near final)

I would go with the purple--partly because red is the player's color.
Campaigns: Dead Water,
The Founding of Borstep,
Secrets of the Ancients,
and WML Guide
Top

I'd lean slightly towards purple as well.
Top

A vote for purple here.

Purple it is, then ! It is her team color, after all.

So, here's the first version. Still needs some work done on the background and maybe also some frost magic FX on the sceptre, but the character's pretty much final.
Oh, and, yes, I am aware that she isn't beautiful. I didn't mean her to be. She's a ruthless woman who went as far as to ally herself with orcs in order to secure her grip on the kingdom, she has suffered many losses in her lifetime, and you'd half expect her to have dabbled in the dark arts at some point. All of this has got to show, but I might have overdone the 'old hag'... 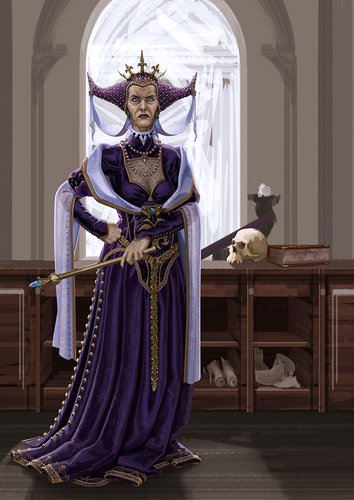